We have had a tremendous response to this segment so therefore we will continue this segment for a while. Here is part 5 of the 25 Interesting Historical Photos spread over two pages. Enjoy and leave you comments. 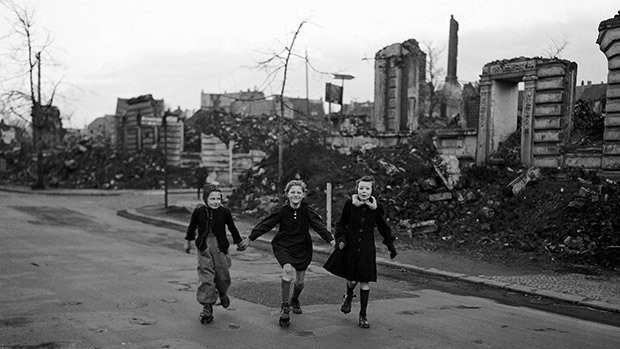 Three girls skate home from school, past blocks of houses destroyed by Allied air raids, Essen, Germany. Notice that they are each wearing only one skate. (February 14, 1949). 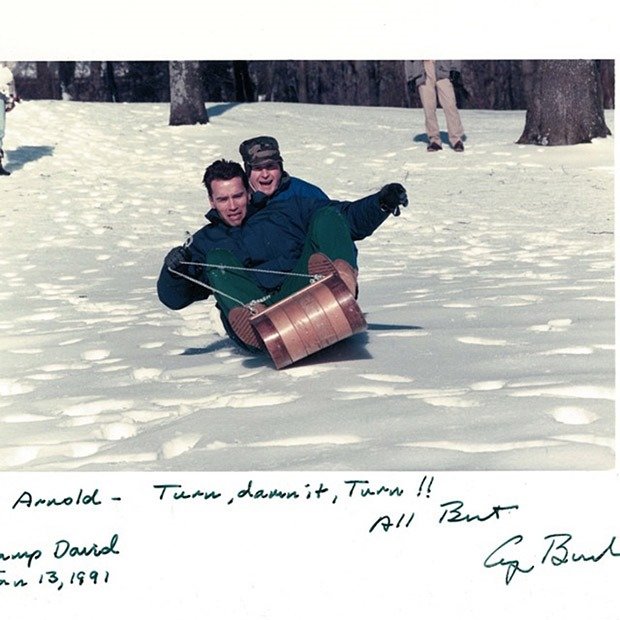 Arnold Schwarzenegger and then President George Bush go for a sled ride. (1991). According to his biography Total Recall, Arnold Schwarzenegger and President Bush were on the sled when they lost control and went straight into Barbara Bush, breaking her leg in the process (which was apparently covered up at the time). That’s apparently why the card says “Turn, damn it, Turn!” 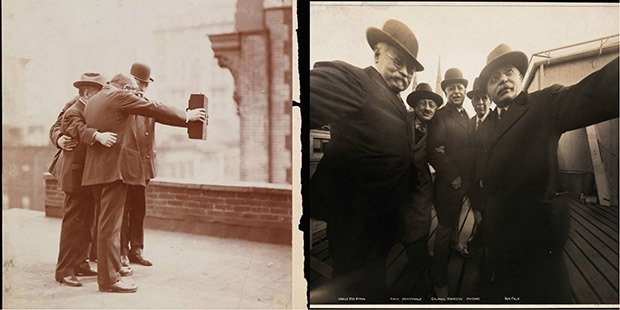 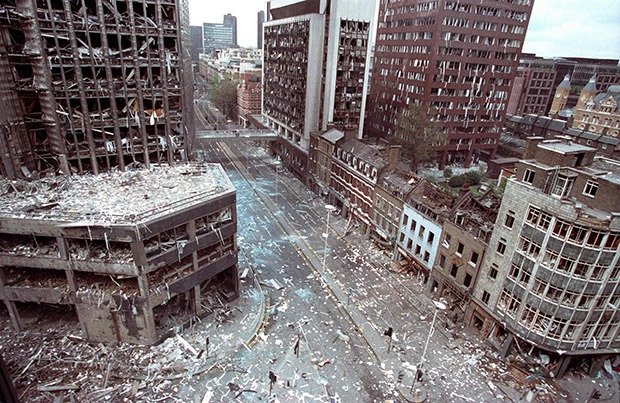 Wormwood Street in the City of London after the IRA detonated a truck bomb on 24 April, 1993. An Iveco tipper truck was stolen in Newcastle-under-Lyme, Staffordshire, and repainted from white to dark blue. A 1 tonne ANFO bomb made by the IRA’s South Armagh Brigade had been smuggled into England, and was placed in the truck disguised underneath a layer of tarmac. At approximately 9 am on 24 April, two volunteers from an IRA active service unit drove the truck containing the bomb onto Bishopsgate. Two police officers were already making inquiries into the truck when the warnings were received, and police began evacuating the area. It killed one and injured more than 40 people. The explosion shook buildings and shattered hundreds of windows, sending glass showering down into the streets below. A mediaeval church, St Ethelburga’s, collapsed; another church and Liverpool Street underground station were also wrecked. 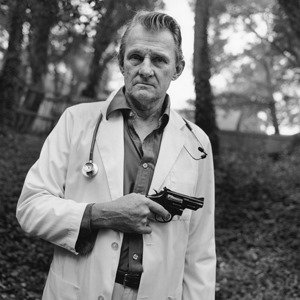 Dr. John Bayard Britton with the .357 Magnum he carried for protection when visiting the Pensacola Ladies’ Centre to perform abortions. He was murdered the following year after this photo was taken by anti-abortion extremist Paul Jennings Hill. (1993). Dr John Britton and Paul Hill had both been featured in a GQ article in February 1994. Hill was the one that frightened the women at the clinic the most. It’s likely Hill found out from the article that Britton wore a homemade bullet proof vest, he shot Britton in the head and also killed Britton’s bodyguard, a retired Air Force lieutenant colonel, James Barrett (aged 74), and wounded Barrett’s wife, June, a retired nurse. 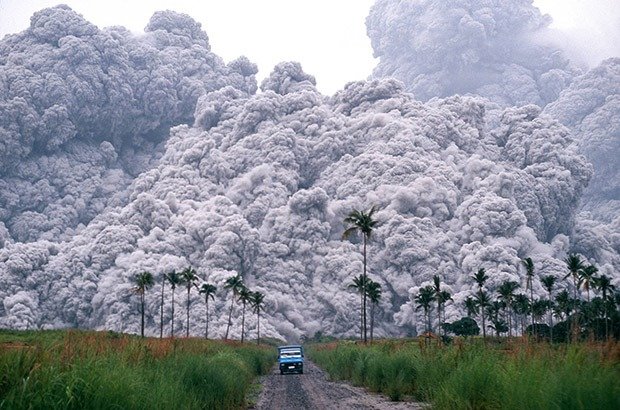 A pickup truck flees from the pyroclastic flows spewing from the Mt.Pinatubo volcano in the Philippines, on June 17, 1991. Pinatubo’s eruption of 1991 produced the second largest terrestrial eruption of the 20th century after the 1912 eruption of Novarupta in the Alaska Peninsula. Complicating the eruption was the arrival of Typhoon Yunya (Diding), bringing a lethal mix of ash and rain to areas surrounding the volcano. Successful predictions at the onset of the climactic eruption led to the evacuation of tens of thousands of people from the surrounding areas, saving many lives, but the surrounding areas were severely damaged by pyroclastic flows, ash deposits, and subsequently, by the lahars caused by rainwaters re-mobilizing earlier volcanic deposits causing extensive destruction to infrastructure and changing the river systems months to years after the eruption.

The effects of the eruption were felt worldwide. It ejected roughly 10,000,000,000 tonnes (1.1×1010 short tons) or 10 km3 (2.4 cu mi) of magma, and 20,000,000 tonnes (22,000,000 short tons) SO2, bringing vast quantities of minerals and metals to the surface environment. It injected more particulate into the stratosphere than any eruption since Krakatoa in 1883. Over the following months, the aerosols formed a global layer of sulfuric acid haze. Global temperatures dropped by about 0.5 °C (0.9 °F) in the years 1991-93, and ozone depletion temporarily increased substantially. 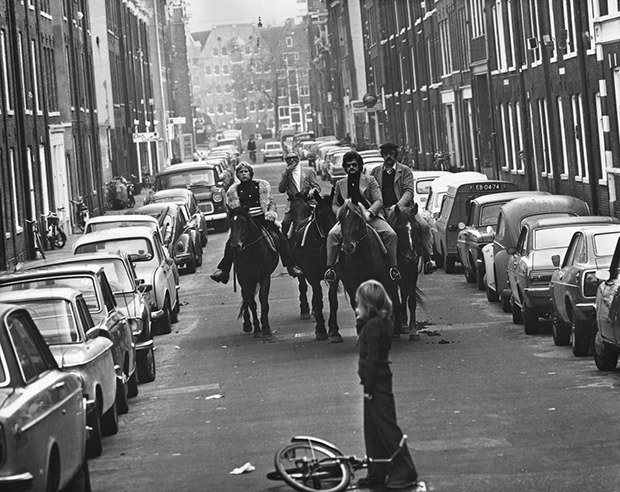 Four horsemen riding through the streets of Amsterdam on a ‘motorless day’, when cars were prohibited due to the oil crisis in the Middle East. Sunday driving was banned in many parts of Europe during the crisis. (4th November 1973).

The modern bike culture in the Netherlands was born during the crisis. There was already a protest against the many deaths due to traffic with bicycles the embargo helped the political process to start investing in the infrastructure they enjoy today in the Netherlands, before this they did not have the separated bike lanes and the cars were pushing the bikes away. 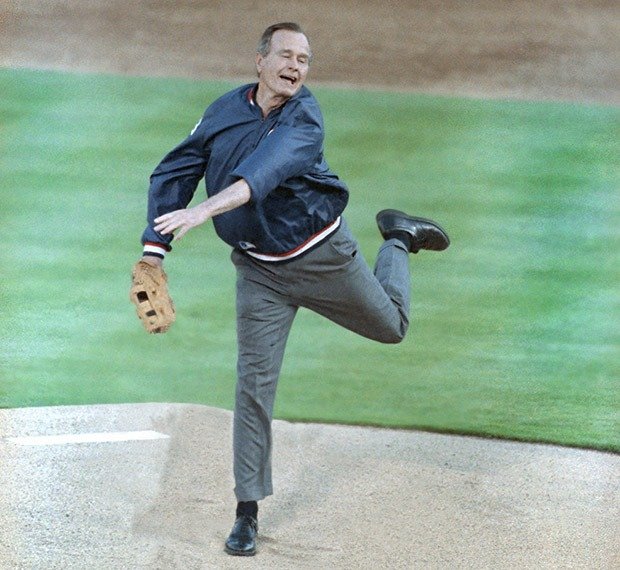 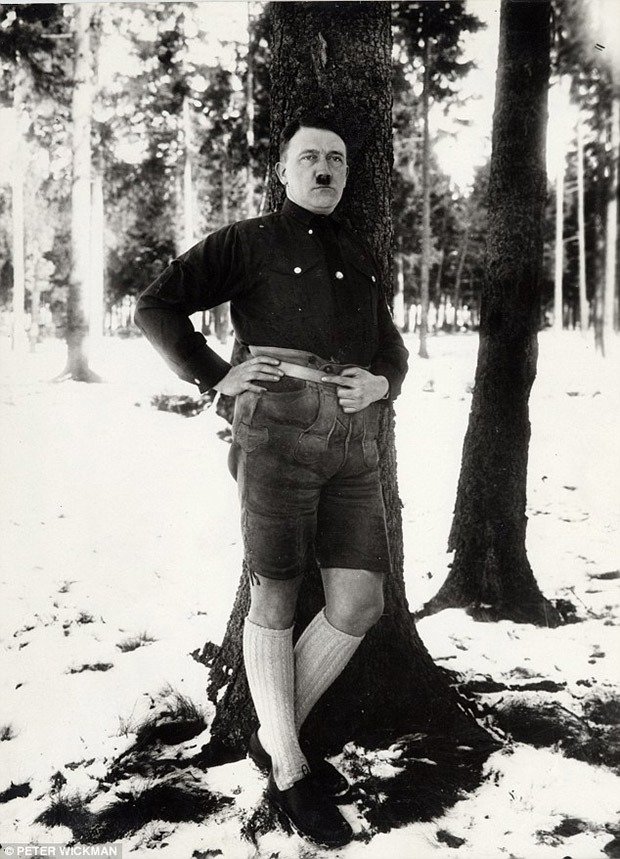 He banned its publication as he considered it “beneath one’s dignity.” It is said that he hated this dress himself. He only wore it because it was a popular dress in Bavaria and the NSDAP was not nearly as popular in Bavaria as in other parts of the country. The reason behind this, partly, was that Catholics did not vote for the Nazis as willingly as Protestants. 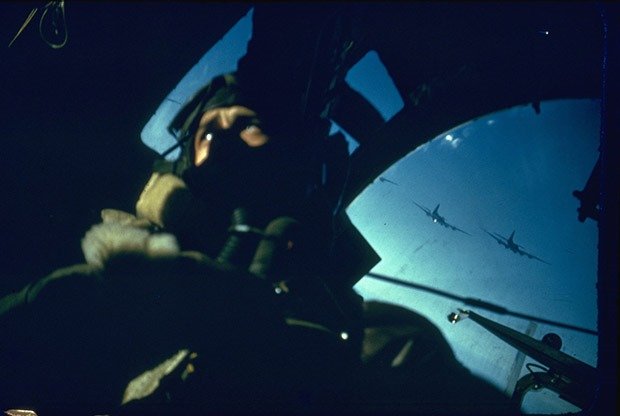 An incredibly rare, candid and original color photograph of a B-17 bombardier heading toward Germany. (1940’s). The survival rate for bombers throughout the first three years of the war was anywhere from 50% to as low as 20%. He was probably thinking about how many planes didn’t return from the last bombing run.

The reason for this is that the Army Air Corps didn’t introduce fighter escorts to bombing runs until the last year or two of the war (keep in mind, this was the first time planes had been used to this extent in warfare, and it was all new and experimental for them). After fighters were added to bomb groups, everything changed. The survival rate jumped to close to 90%. But early in the war, being a bombardier was one of a few jobs that almost guaranteed you wouldn’t make it home alive. 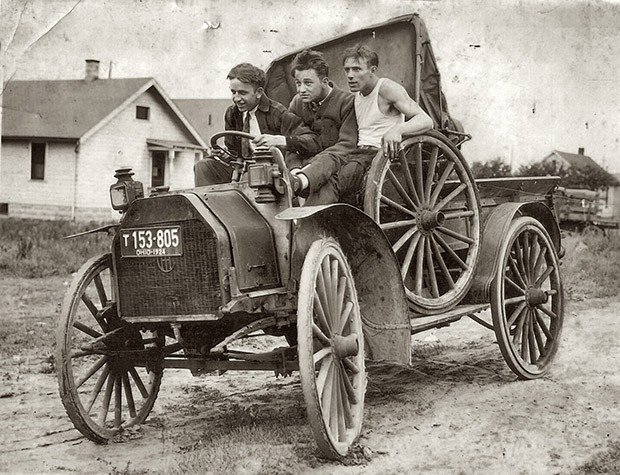 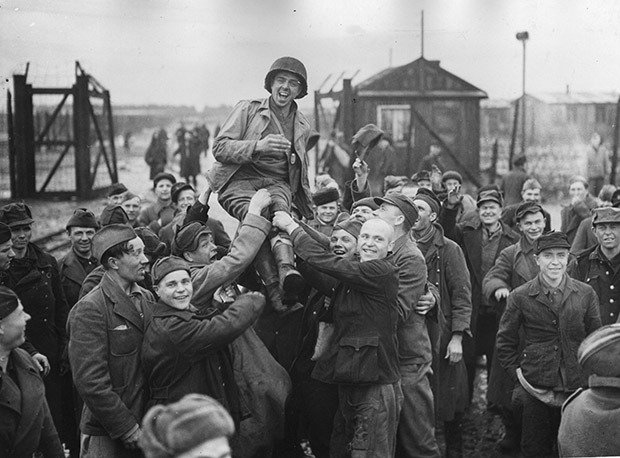 Russian prisoners of war lifting up an American soldier after the US 9th Army liberated them from their camp at Eselheide, Germany. (9th April 1945).

These POWs were likely taken prisoner in the latter stages of the Eastern Front. From Operation Barbarossa to early 1942, Soviet POWs were victims of one of the most concentrated mass killings in history. They faced starvation, abuse, and executions. There are records of some prisoners requesting to be shot. This brutality was only alleviated after the Germans realized they could be used as a labor force. Still, almost 60% of the 5.7 million POWs died in captivity (which doesn’t include those who were killed immediately after surrendering). They were among the first victims of Nazi racism.

Contrary to popular belief, the vast majority of liberated POWs were not sent to Gulags. Most were re-conscripted or sent home, 22% served in labor battalions for a few years, and ~15% were taken to Gulags. All of them endured suspicion until “De-Stalinization”.