Here are this week’s Historical Photos. 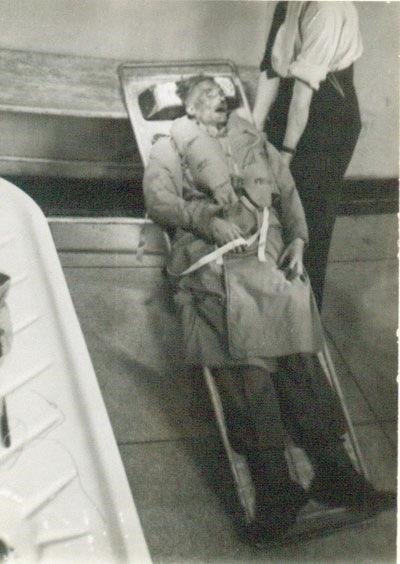 The cadaver of alcoholic drifter, Glyndwr Michael being loaded into a submarine pod in full military attire and life vest complete with fake alias (Major William Martin) and an orchestrated letter alluding to an Allied invasion of Nazi occupied Greece. AKA Operation Mincemeat.

Operation Mincemeat completely changed the face of WWII. It was one of the largest and most successful acts of military espionage aimed at directing the Nazi military to Greece and take attention away from Sicily where a genuine invasion was planned. It had knock on effects as well such as making it easier for the Soviet forces to push forward on the Eastern front.

The more you read into this the more you realize the absolutely insane level of planning that went into making the back story to this body watertight – a catholic faith meaning that an autopsy could not be carried out, a bank of fabricated love letters, a network of completely invented spies, obituaries and parish records that German spies could get their hands on. All information and instructions were distributed on a strictly need-to-know basis and the operation made a lot of use of the enigma code-breaking machine in Bletchley Park.

Interestingly, Mr. Michael was actually given honors posthumously and buried in a military graveyard in Spain. When his identity was revealed the Commonwealth War Graves Commission added a line to his headstone that read “Glyndwr Michael served as Major William Martin” and the Spanish gave him a 21 gun salute. A plaque commemorating Glyndwr Michael is now also on the war memorial in Aberbargoed, Mr. Michael’s hometown. It is headed “Y Dyn Na Fu Erioed” (translation – “The Man Who Never Was”).

One more side-note: The original plan for the operation was just one of dozens of proposed ideas and stated that it shouldn’t be too hard to source a corpse from the Navy morgue but that it would “have to be a fresh one”. Ian Fleming was co-author of a lot of these documents. Ian Fleming – of course – went on to write the James Bond books and based the character of M on his boss from the time, John Henry Godfrey. 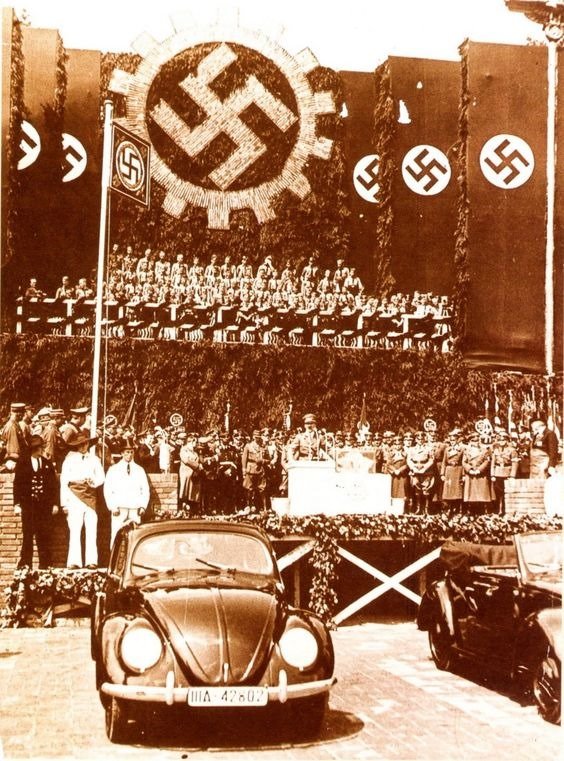 Hitler at the presentation of the Beetle, 1940s.

Volkswagens origins have always fascinated me. It’s one of those things where a horrible dictator had a good and people-friendly idea. But in the back of your head you often think “this was made by a horrible dictator”. I mean during the 1930s their logo had swastika wings. 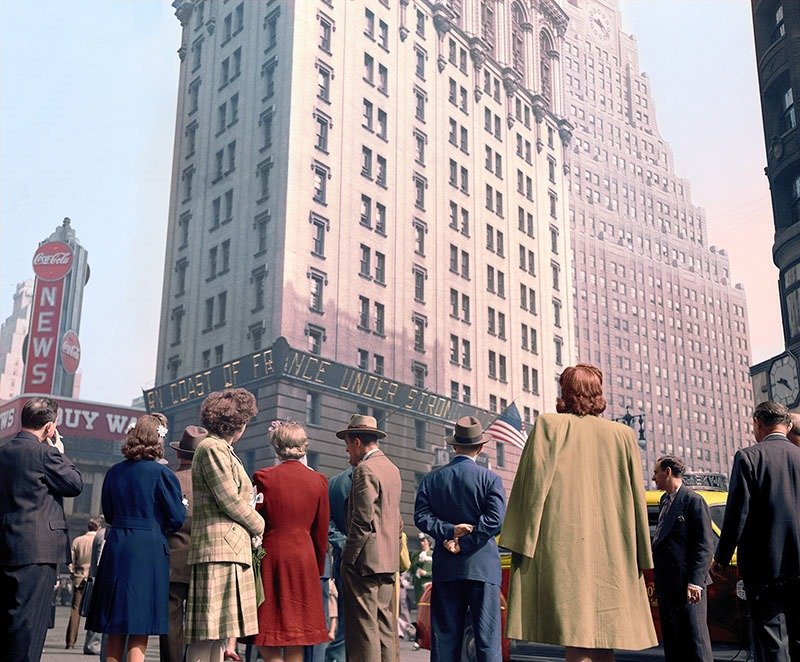 The electric news ticker sign – “The Zipper” – went up in 1928, displaying headlines within a minute of a story breaking. 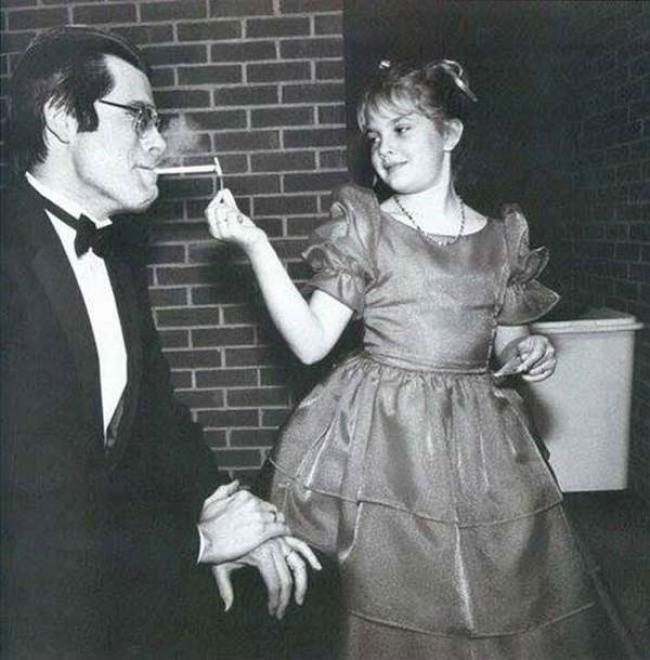 Stephen King has his cigarette lit by a young Drew Barrymore, 1984. 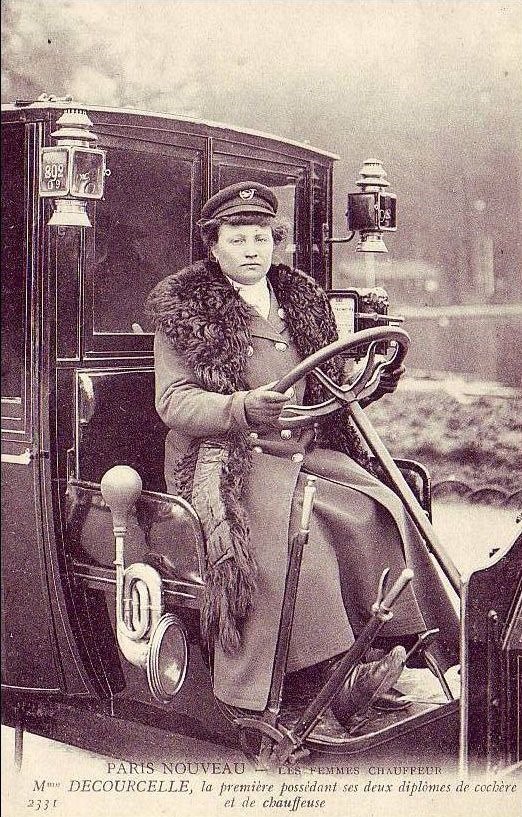 Madame Decourcelle is said to have been the first female taxi driver in Paris— a chauffeuse who also had a license to drive horse cabs. 1909, Bois de Boulogne. 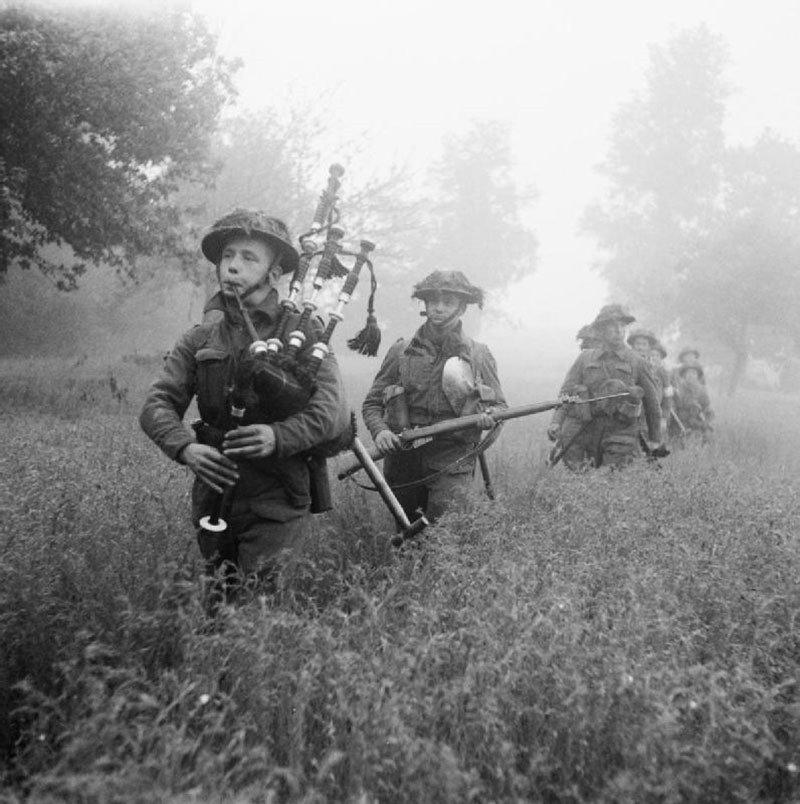 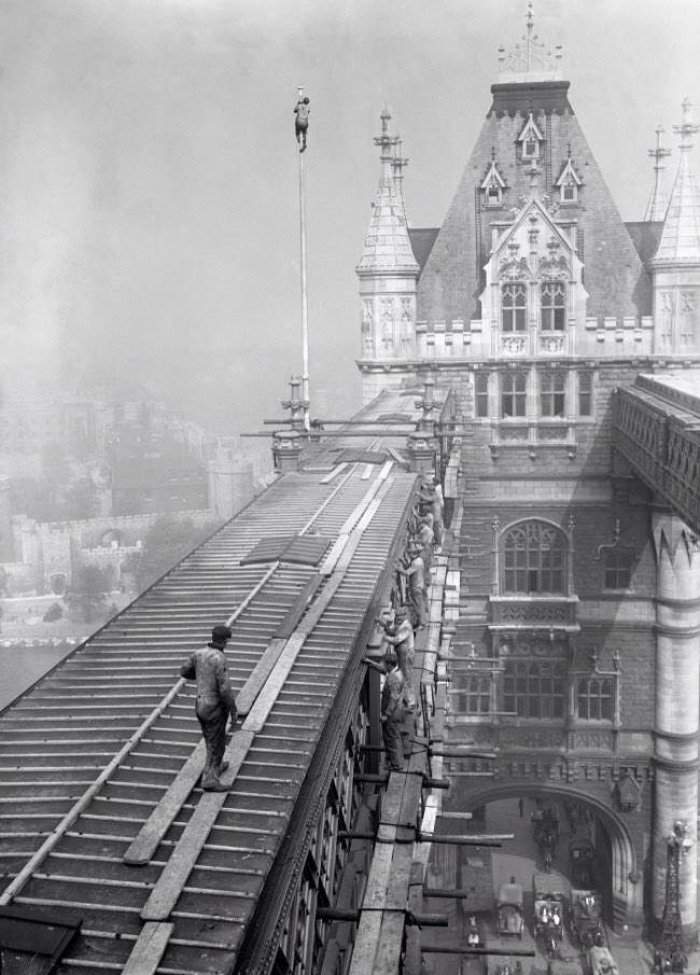 Workmen on the gantry of Tower Bridge, around 1890. 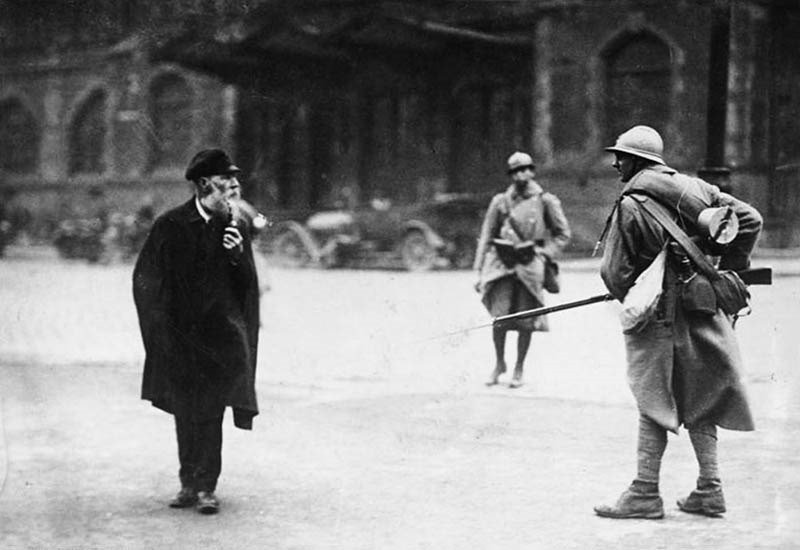 In January 1923 France and Belgium invaded the Ruhr, an industrial area of German bordering their own countries. The occupation of Ruhr was in response to the Wiemar Republic’s failure to continue its reparation payments in the aftermath of World War I. This region, full of factories and coalmines, contained resources the French and Belgians intended to use to make up for the unpaid reparations.

German workers refused to co-operate with the French and Belgian armies, and went on strike. The German government supported them. The French sent in their own workers, and arrested the leaders of the German strikers and the German police. This led to violence on both sides. Though the French did succeed in making their occupation of the Ruhr pay, the Germans through their passive resistance in the Ruhr and the hyperinflation that wrecked their economy, won the world’s sympathy, and under heavy Anglo-American financial pressure (the simultaneous decline in the value of the franc made the French very open to pressure from Wall Street and the City), the French were forced to agree to the Dawes Plan of April 1924, which substantially lowered German reparations payments. Under the Dawes Plan, Germany paid only 1 billion marks in 1924, and then increasing amounts for the next three years, until the total rose to 2.25 billion marks by 1927.

The Ruhr occupation of 1923-1925 marked a shift in the balance of power in Europe in Germany’s favor. Firstly, it demonstrated that the Anglo-French entente had ended as a counter-weight to German power. Secondly, France was faced with a united front of Germany-Britain-America against its invasion and was denounced as a chauvinistic, warmongering, greedy power. Politicians and the press in Britain, for example, regarded the French view that Germany was preparing to launch another war as absurd and “insane”.

Although the Ruhr occupation was profitable, the furore it caused shattered French will. As the historian Sir Denis Brogan wrote: “Germany was still open to French invasion, but the will to invade was dead”. So by the 1930s when Germany managed not only to get reparations abolished but was openly flouting the disarmament clauses of the Versailles Treaty, France did not feel able to act even when she possessed military superiority (until the late 1930s). France was divided between right and left (who were anti-militarist); a divided country is not in an ideal state to invade another. 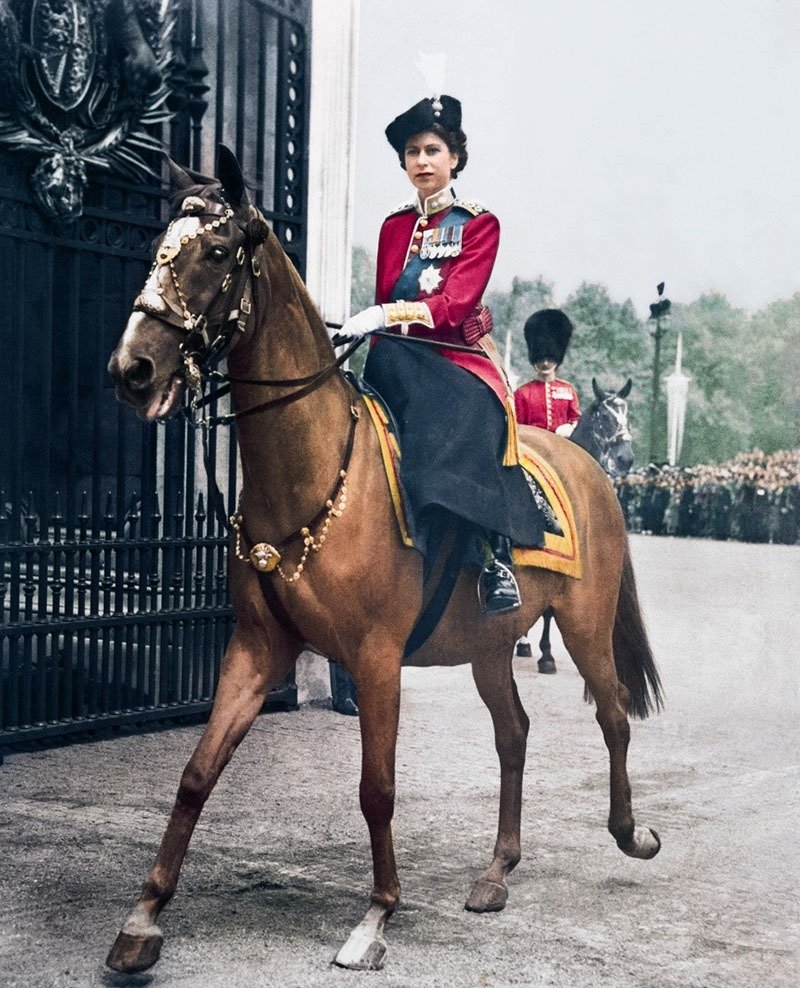 Princess Elizabeth II representing the King during the Trooping of the Color ceremony in St. James’s Park, London on June 7th, 1951.

10. Begging for his life 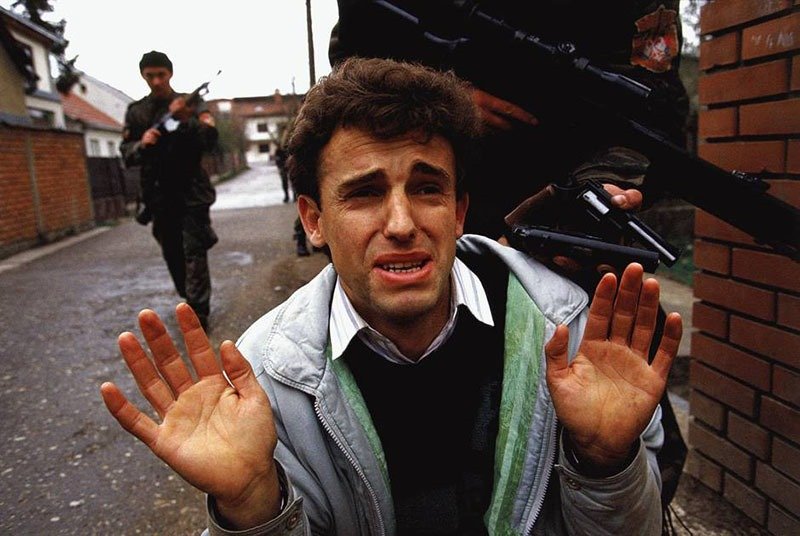 A Muslim man begs for his life after being captured in Bijeljina, Bosnia, by Serbian extremists of the Serb Volunteer Guard, “Arkan’s Tigers”. He was later thrown from a window. April 1992.

Although what happened in Bijeljina was described by the Serbs as “cleansing the town from Muslim fundamentalists”, in reality it was the killing of up to 78 unarmed people, almost all civilians, over two days by the Ultranationalists of Mirko and Arkan.

First, Bosnian Serb paramilitary forces, often with the assistance of the JNA, seize control of the area. In many cases, Serbian residents are told to leave the area before the violence begins. The homes of non-Serb residents are targeted for destruction and cultural and religious monuments, especially churches and mosques, are destroyed. Second, the area falls under the control of paramilitary forces who terrorize the non-Serb residents with random killings, rapes, and looting. Third, the seized area is administered by local Serb authorities, often in conjunction with paramilitary groups. During this phase, non-Serb residents are detained, beaten, and sometimes transferred to prison camps where further abuse, including mass killings, have occurred. Non-Serb residents are often fired from their jobs and their property is confiscated. Many have been forced to sign documents relinquishing their rights to their homes before being deported to other areas of the country

An investigation by the ICTY later stated that the victims had been shot “in the chest, mouth, temple, or back of the head, some at close range” and that none had been wearing military uniforms.

This photo was taken by Ron Haviv, an American journalist. When it was published and became a rallying cry against Serb warcrimes, the Serb war lord, Arkan put out a death warrant on Haviv and promised to “drink his blood”. Haviv took another famous photo of the same massacre showing a Serb paramilitary kicking a dying Bosnian woman he’d just shot.