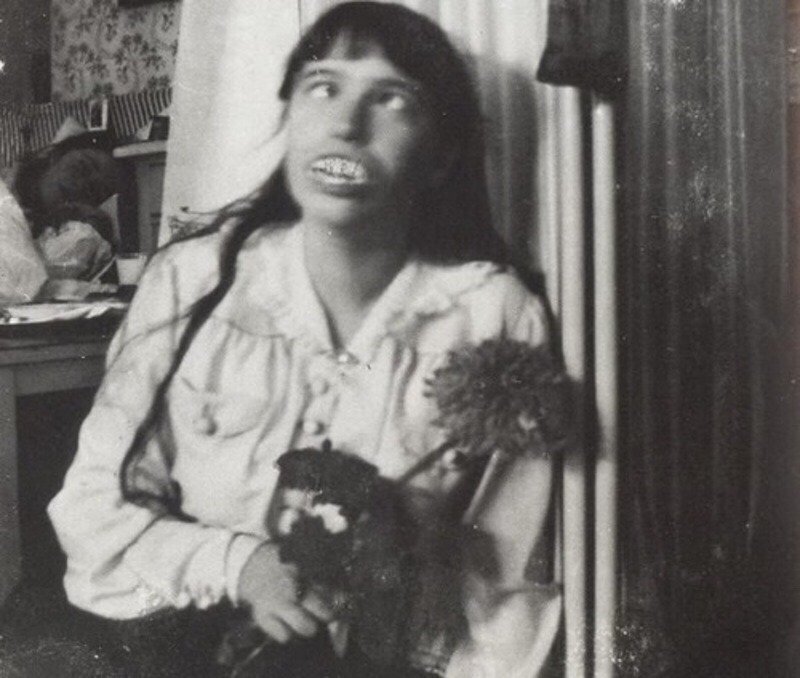 Grand Duchess Anastasia of Russia making a silly face and wearing false teeth while her sister, Maria, sleeps in the background. Circa 1916. 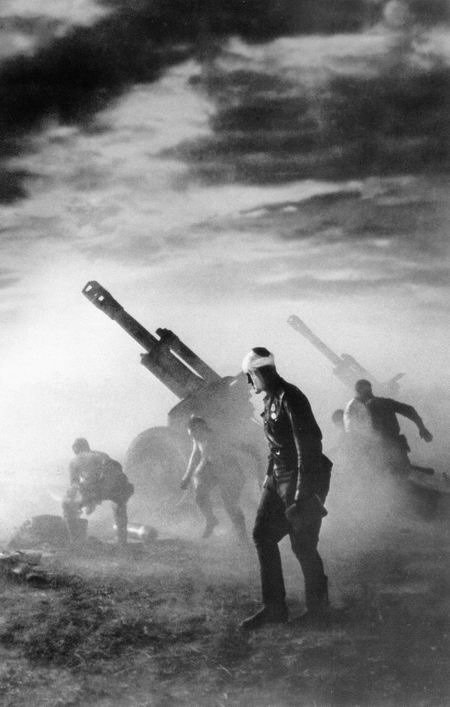 A Wounded Russian Soldier drifts past a 152mm Howitzer battery firing during the Belorussian Offensive Operation, 1944.

Belorussian Strategic Offensive Operation (operation “Bagration”) resulted in complete destruction of German Army Group Center. In 2 months the 1,100 km front-line moved 600 km west. During this operation, the Soviet armies in Belarus completely destroyed Army Group Center  of the Wehrmacht, losing five times fewer people than the Germans. This photo was taken on the summer of 1944 by Emmanuel Yevzerikhin. In the Soviet photographic album this photo is called “Stand to Death”, the soldiers and the guns look so futuristic. 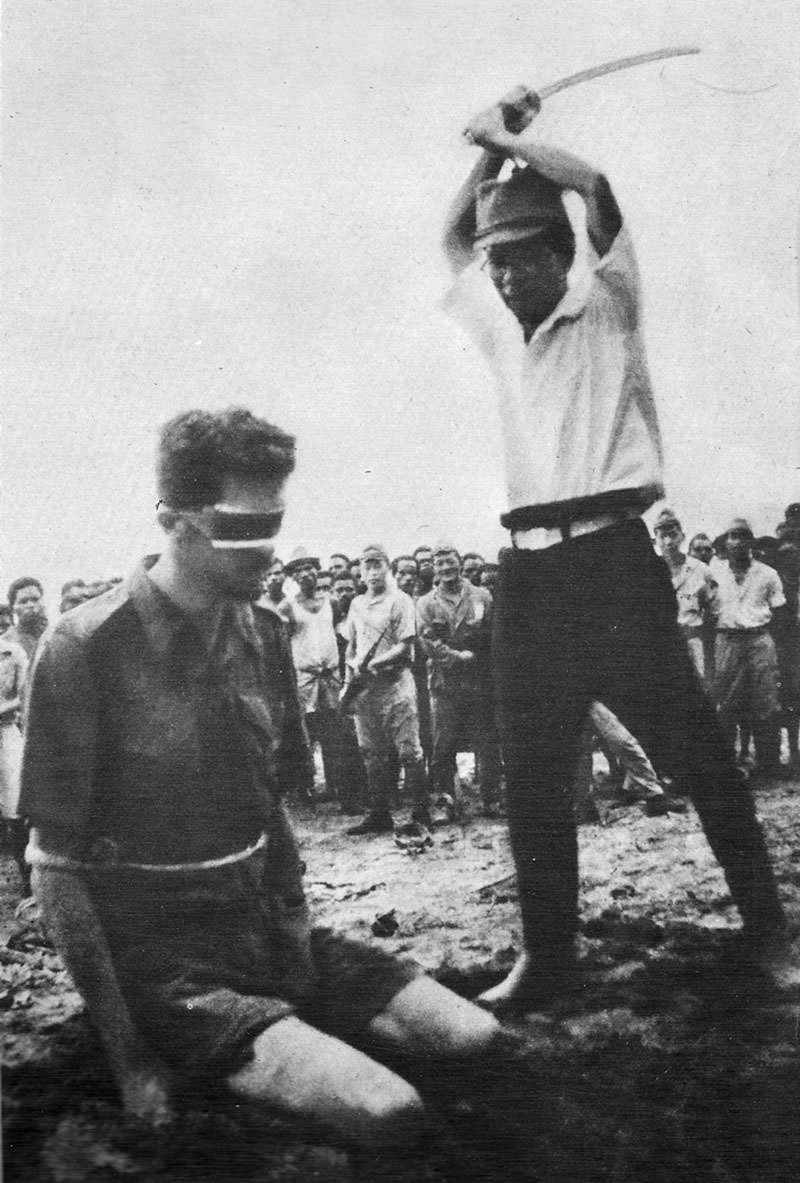 Australian Sgt Leonard G. Siffleet of “M” Special Unit, about to be beheaded with a sword by Yasuno Chikao. The execution was ordered by Vice Admiral Kamada. New Guinea 1943.

Under the code of Bushido that the Japanese military conformed to at the time, the act of beheading a captured enemy actually restored some lost honor to the foe, since warriors were considered dishonored if they allowed themselves to be captured alive. In the eyes of the Bushido adherents, this “dishonorable surrender” justified the terrible treatment captured Allied prisoners received at the hands of the Japanese. This explanation is not made to justify the beheading but perhaps place it into historical context. 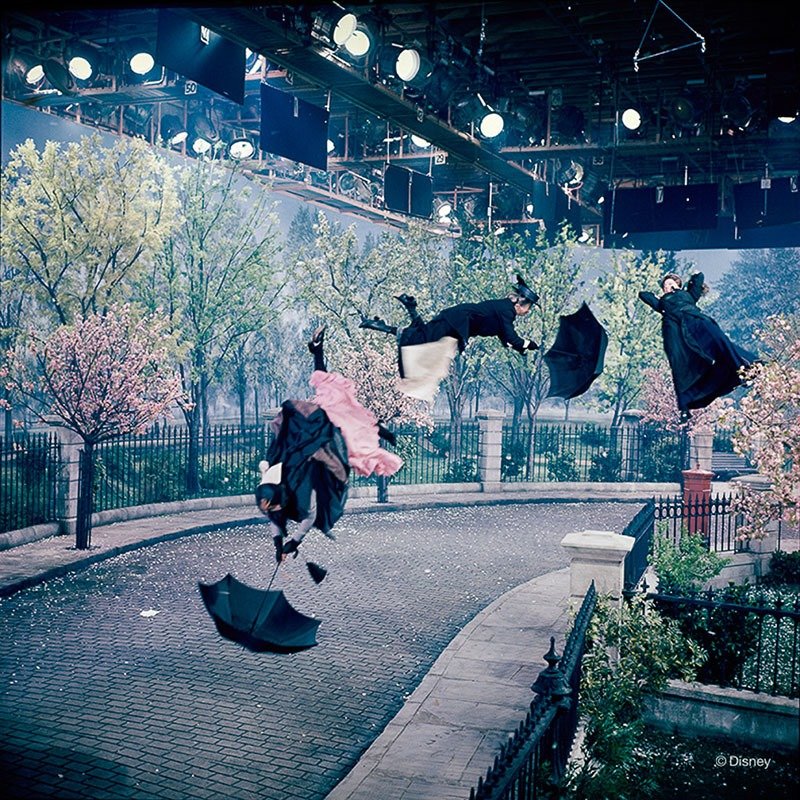 1964: “Nannies” (actually well-costumed stuntmen) are blown away by special effects “wind” on the Cherry Tree Lane set built in the Disney Studio’s Stage 4 during the production of Mary Poppins. 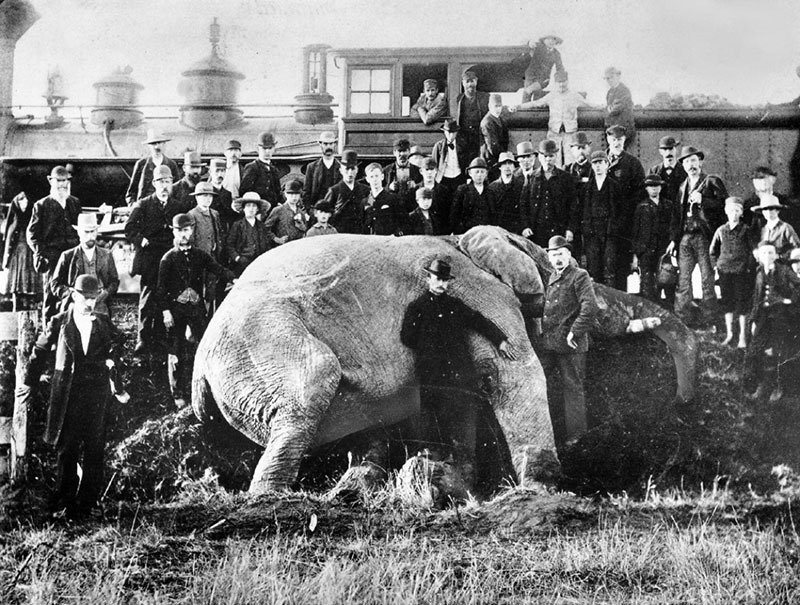 A crowd gathers after Jumbo the elephant is struck and killed by a train in St. Thomas, Ontario. Sep 15, 1885.

They stuffed Jumbo and put him in a hall at Tufts University. In 1975 that building burned down and Jumbo along with it. 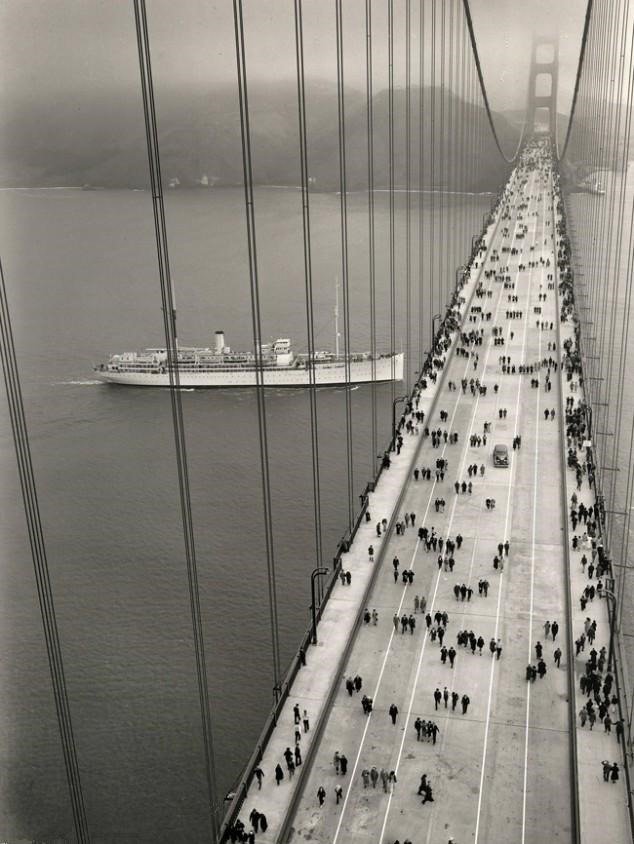 The Golden Gate Bridge Fiesta was a weeklong celebration that included a nightly pageant at Crissy Field, fireworks, parades, and entertainment. The Official Program of the Golden Gate Bridge Fiesta included a week-long schedule of events as well as included the bridge toll rates, general rules as well as the traffic rules for the new bridge. It also included a proclamation from San Francisco Mayor Angelo Rossi, photographs of the bridge engineers, and various facts about the span. During the festivities, many area schools were closed and businesses were either closed or reduced to minimum staff to join the festivities.

On May 27, 1937, the Fiesta began at 6 am with Pedestrian Day – the entire roadway was opened exclusively to pedestrians from dawn to dusk. By 6 am, it is estimated that 18,000 people were waiting to cross! An estimated 15,000 an hour passed the turnstiles in a steady stream each paying 25 cents to cross. Scores of hot dog stands lined the roadway with estimates of up to 50,000 sold. 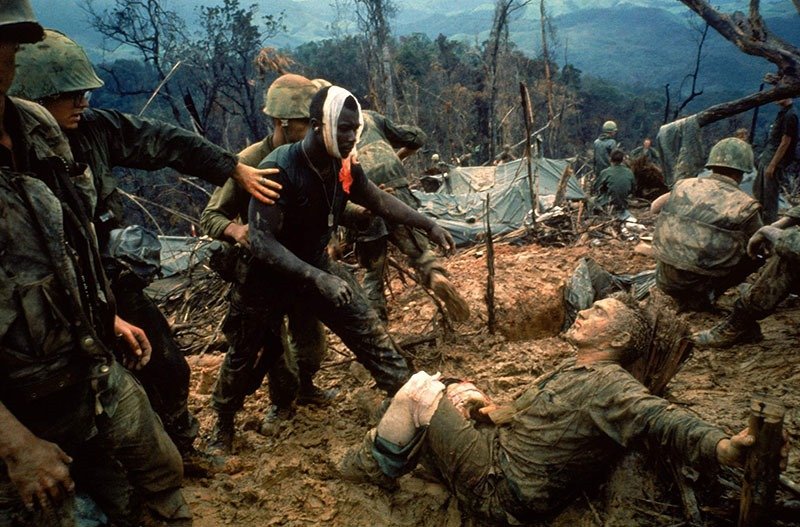 I remember listening to Dan Carlin’s hardcore history on WW1 and the Battle of Passchendaele. The mud just makes everything 1000 times worst, some people would slowly sink in and drown, equipment would be swallowed by it, dead bodies would be impossible to remove and would be left there to rot, trench foot was very easy to develop, and even the most simple wounds would get infected and could not be treated easily. Also the smell, the smell from the bodies and excrement not having anywhere to go. Sometimes when it was raining people in the field would crawl under a parked tank to sleep under shelter. If the mud and grass was soft from the rain the tank would sink a little and smother them. It must have been hell on earth. 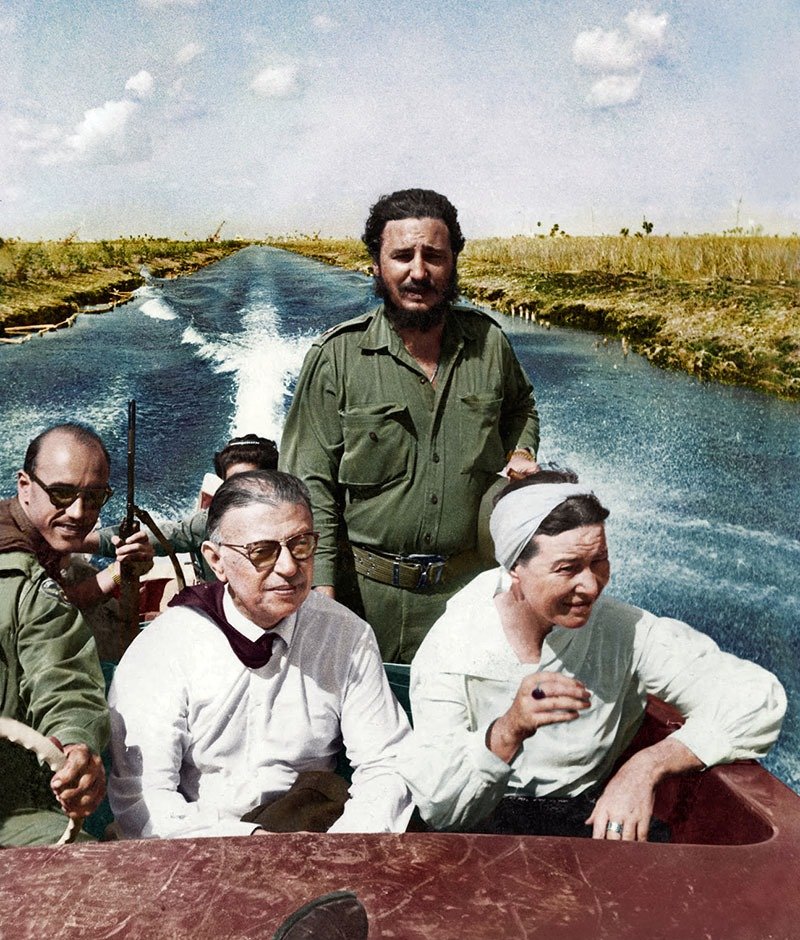 In 1960, during the afterglow of the Cuban revolution, Simone de Beauvoir, the famous feminist philosopher, took a trip with her long-time companion Sartre to Havana. They were part of a larger flock of leftist intellectuals who were invited to Cuba to attend cultural congresses. When they arrived in February, they met with Che Guevara and talked for hours. Photos were taken by Cuban photographer Alberto Korda. De Beauvoir wrote: “Well-known performers danced or sang in the squares to swell the fund; pretty girls in their carnival fancy dresses, led by a band, went through the streets making collections.”It’s the honeymoon of the Revolution,” Sartre said to me. No machinery, no bureaucracy, but a direct contact between leaders and people, and a mass of seething and slightly confused hopes. It wouldn’t last forever, but it was a comforting sight. For the first time in our lives, we were witnessing happiness that had been attained by violence.” Later that year in October, Sartre and de Beauvoir returned to Cuba, but were somewhat disappointed. Fidel invited Jean-Paul Sartre and Simone de Beauvoir to visit Cuba again, and they did, but this time they weren’t so entranced. “Havana had changed; no more nightclubs, no more gambling, and no more American tourists; in the half empty Nacional Hotel, some very young members of the militia, boys and girls, were holding a conference. On every side, in the streets, the militia was drilling,” de Beauvoir wrote. The atmosphere was tense with rumors of invasion, and a notable air of repressive uniformity was seeping into Cuban life. When Sartre and de Beauvoir asked workers at clothing mill how their lives had benefited from the revolution, a union leader quickly stepped forward to speak on their behalf, parroting the government’s dogma. 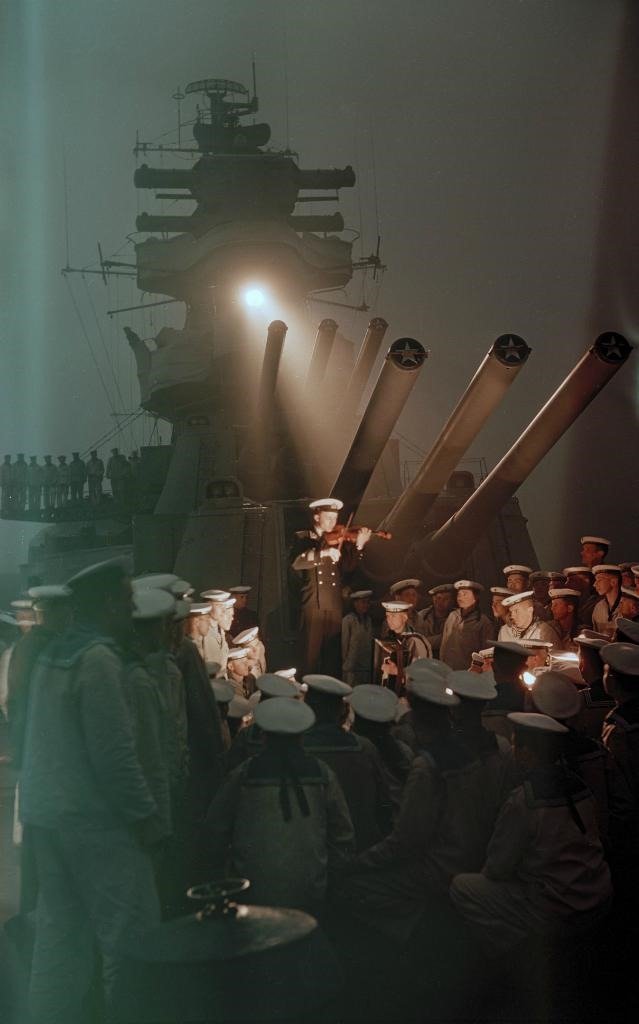 Evening on the cruiser Kalinin. The Soviet Pacific Fleet, 1955. 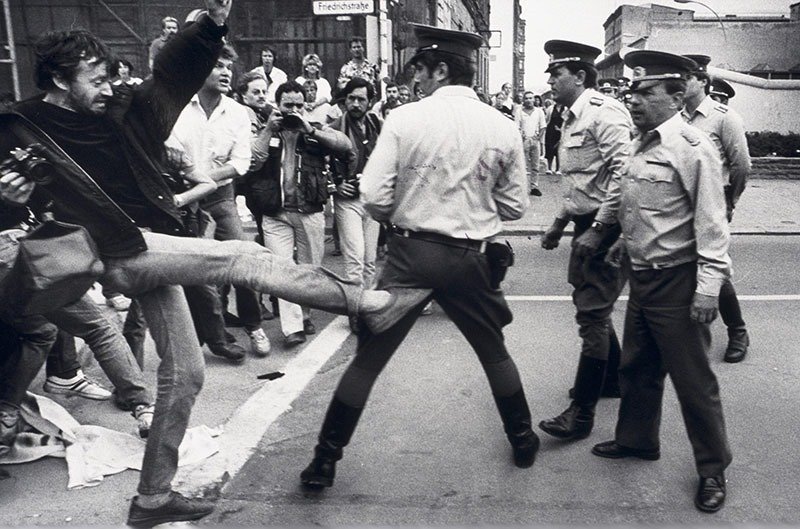 A photographer in West Berlin kicks a policeman standing across the border in East Berlin during demonstrations at Checkpoint Charlie, 13 August 1986.

Photo by Roland Holschneider: He said, “When I arrived at Friedrichstrasse on 13 August 1986, demonstrators were taunting police at Checkpoint Charlie. The white line indicates the frontier between East and West. I took one step across the line, which would normally be dangerous, but the policemen were busy controlling the demonstrators. Then the man on the left kicked the policeman’s backside. My picture, symbolizing the crazy situation in Berlin, was widely published in Germany and abroad.”