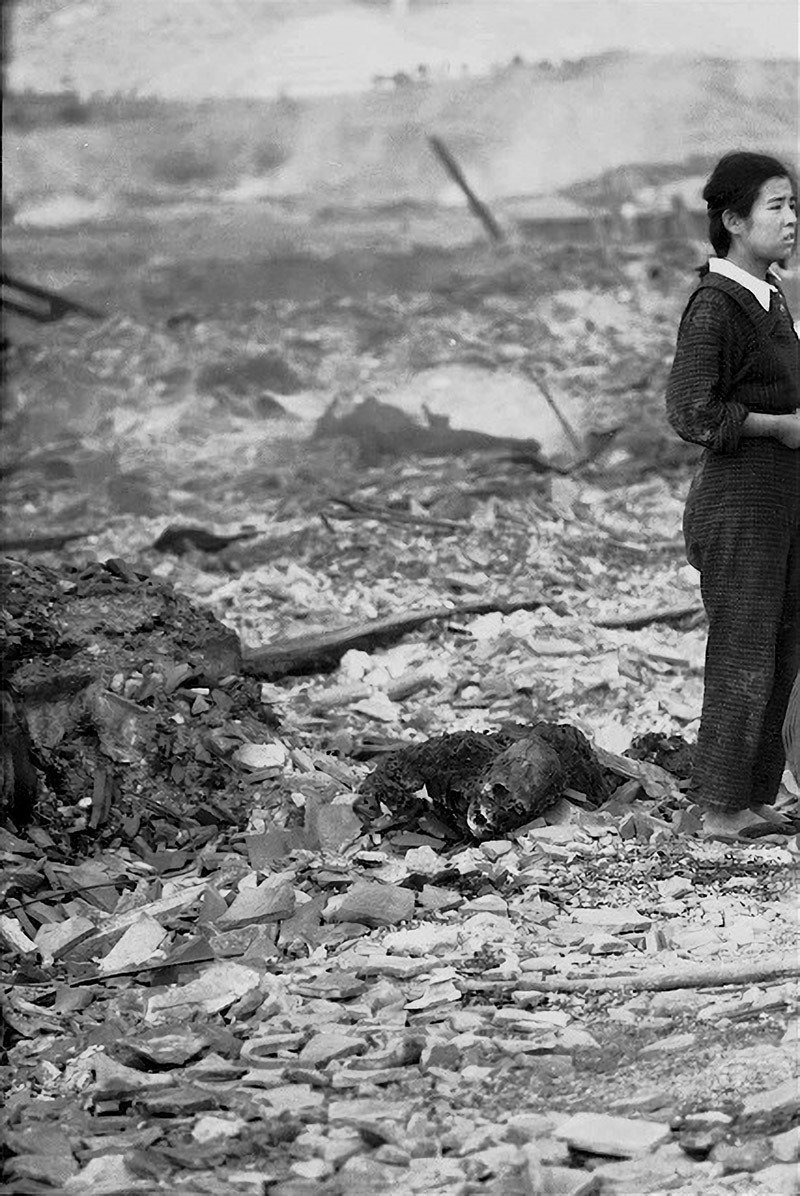 People right by the blast radius were vaporized. Most of the damage/deaths came from the wildfire afterwards, or radiation poisoning later. There’s a really good, albeit disturbing, documentary the BBC made about Hiroshima that shows what it was like afterwards. Lots of people survived initially and had to deal with a living hell.

The Nukes dropped on Japan (while devastating) were still not the deadliest raids against Japan. In a single night, an estimated 1,000,000 Japanese were killed in Tokyo in a fire bombing attack (use of incendiary bombs instead of HE). Tokyo was essentially built of wood at the time, so the fire raid was especially effective. Allied planners even took into account wind direction and intensity when planning the attacks to maximize effect.The nuclear drops killed a few hundred thousand each, less combined than the single raid on Tokyo.

Let’s also not forget who started the practice of bombing civilian targets. Early in the battle of Britain, German bombers missed their target (Airfield or Radar station, can’t remember) and hit a small city. The next day, the British retaliated and bombed Berlin. Enraged, Hitler ordered full scale attacks on English cities (a decision some argue lost Germany the war against the UK). 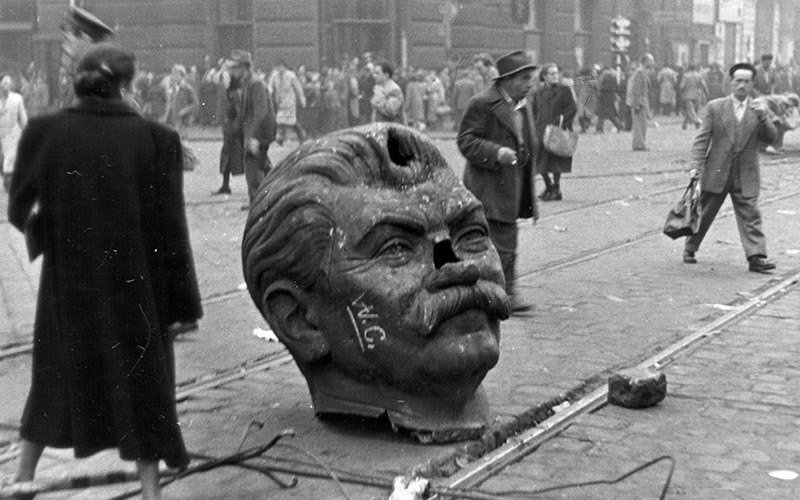 A decapitated statue of Joseph Stalin’s head on the streets of Budapest during the Hungarian Revolution of 1956. 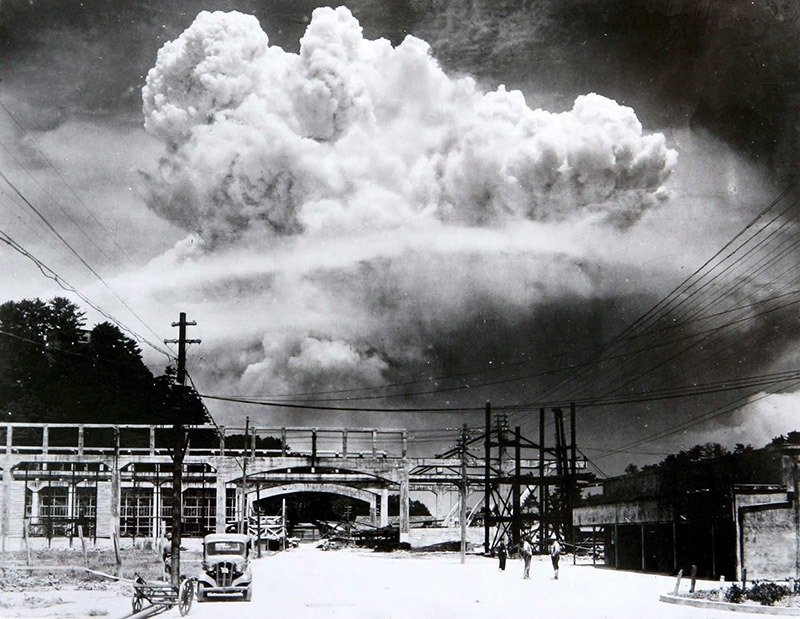 The rising mushroom cloud over Nagasaki, a few minutes after its atomic bomb detonation denotation. August 9, 1945.

The orthodox view is that it took the second bomb to convince the Japanese. In recent years, another explanation has come forth. In short, the bombs weren’t that impressive. The US had used them against basically non-military targets, and had not affected the war-making machine at all. What’s more, the US had done ever more damage during earlier conventional air raids. There were elements of the Japanese government who had been been trying to make a separate peace agreement with the Russians, and use it to get better terms from the US. But Russia had declared war on Japan, and invaded Manchuria and Sakhalin Island. Lots of details here. 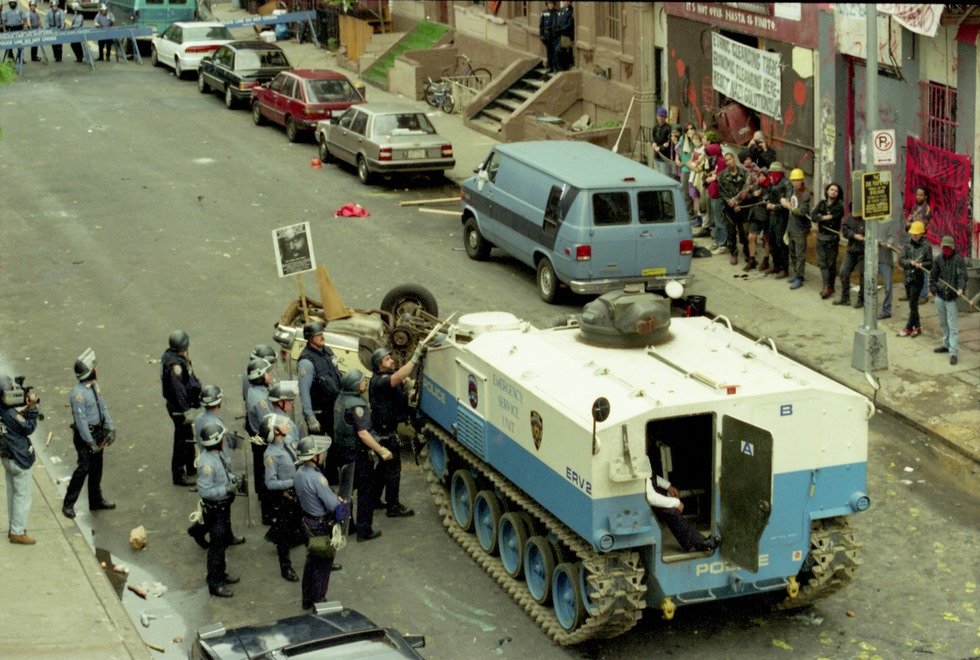 NYPD trying to clear squatters out of the Lower East Side, circa 1995. Here is some info on it 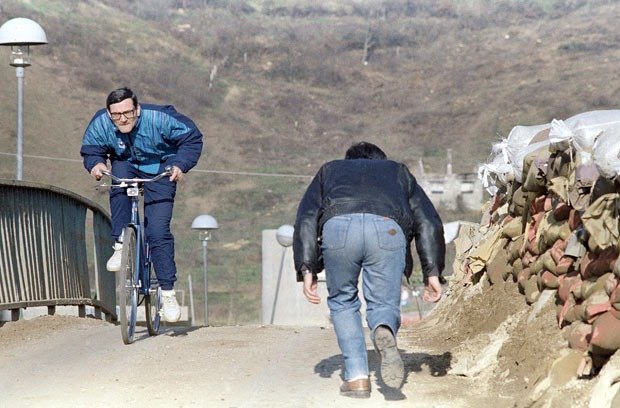 A man ducks behind sand bags for cover as a cyclist races across a bridge in the suburb of Dobrinja during the siege of Sarajevo to avoid being shot by snipers who regularly targeted civilians crossing the bridge, November 26th, 1992. 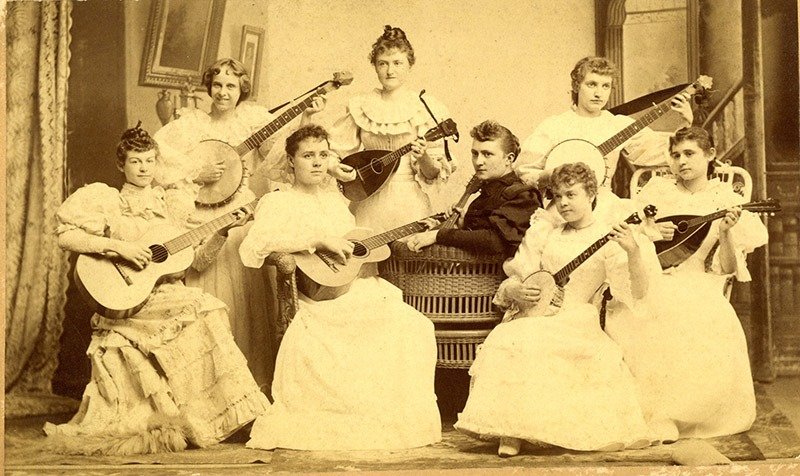 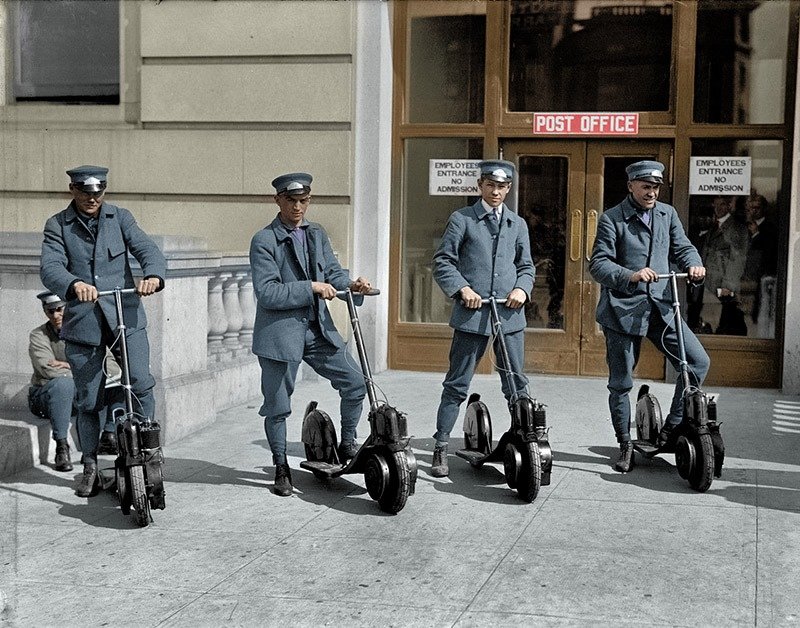 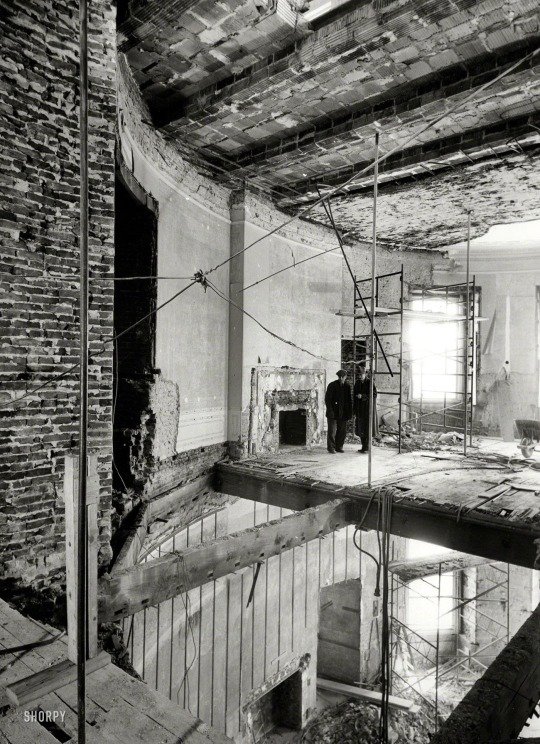 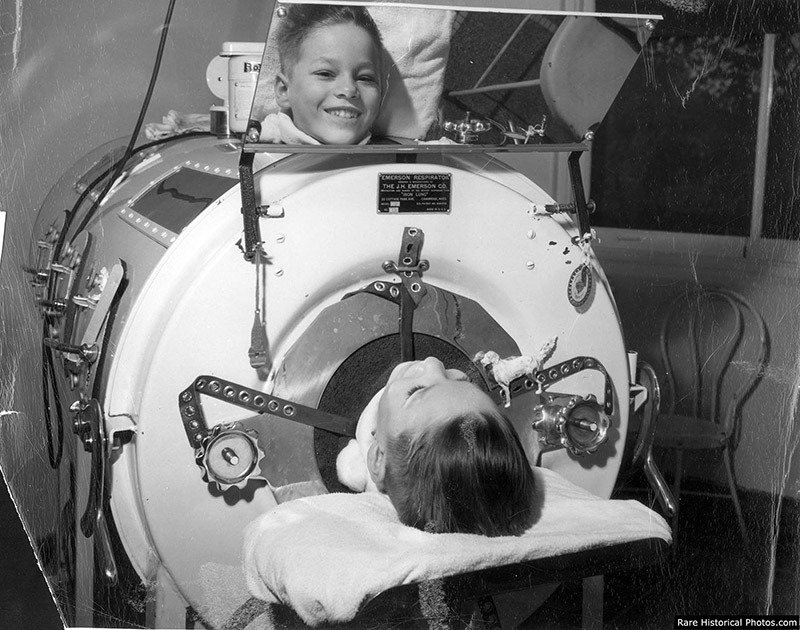 Unable to breathe, patients entered iron lungs, which made use of negative pressure ventilation to compress and depress the chest, simulating respiration.

In the early 20th century, polio was one of the most feared diseases in industrialized countries, paralyzing hundreds of thousands of children every year. A highly infectious disease, polio attacks the nervous system and can lead to paralysis, disability and even death. The symptoms – pain and weakness, fatigue and muscle loss – can strike any time from 15 to 50 years after the initial disease. In 1952, more than 21,000 Americans contracted a paralyzing form of polio, and 3,000 died from it. Once infected, there was no treatment besides time and tending to the symptoms.

No device is more associated with polio than the tank respirator, better known as the iron lung. Before its invention, children with polio died frequently. Physicians who treated people in the acute, early stage of polio saw that many patients were unable to breathe when the virus’s action paralyzed muscle groups in the chest.

The first iron lung used in the treatment of polio victims was invented by Philip Drinker, Louis Agassiz Shaw, and James Wilson at Harvard, and tested October 12, 1928 at Children’s Hospital, Boston. The original Drinker iron lung was powered by an electric motor attached to two vacuum cleaners, and worked by changing the pressure inside the machine. When the pressure is lowered, the chest cavity expands, trying to fill this partial vacuum. When the pressure is raised the chest cavity contracts. This expansion and contraction mimics the physiology of normal breathing. Although the patient could breathe in the machine, he could do little else besides look up at a mirror reflecting the room behind him.

During the polio epidemics, the iron lung saved many thousands of lives, but the machine was large, cumbersome and very expensive: in the 1930s, an iron lung cost about $1,500—about the same price as the average home. The cost of running the machine was also prohibitive, as patients were encased in the metal chambers for months, years and sometimes for life: even with an iron lung the fatality rate for patients with bulbar polio exceeded 90%. These drawbacks led to the development of more modern positive-pressure ventilators and the use of positive-pressure ventilation by tracheostomy. Positive pressure ventilators reduced mortality in bulbar patients from 90% to 20%. 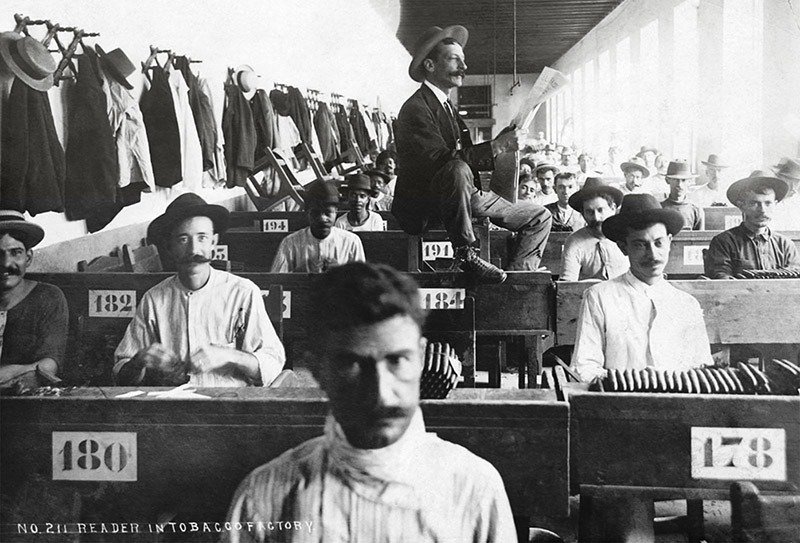 The practice of reading aloud while others listen intently as they engage in manual labor has a long and distinguished tradition through out the Caribbean in the practice of cigar manufacture. Because the job of rolling cigar after cigar could become monotonous, the workers wanted something to occupy and stimulate the mind. Thus arose the tradition of lectors, who sat perched on an elevated platform in the cigar factory, reading to the workers. It started in Cuba and was brought to the United States more particularly to Key West in 1865 when thousands of Cuban cigar workers emigrated to Florida to escape Spanish oppression.

Historically, lectors or readers in a cigar factory entertained workers by reading books or newspapers aloud, often left-wing publications, paid for by unions or by workers pooling their money. The workers would each give 25 to 50 cents of their weekly salary to elect a fellow workman to act as “the reader” in which he would read aloud not just only newspapers, but even classical works of literature such as Tolstoy or Dickens.

The readers, elected by their peers, were actually marvelous actors and would not simply read the book but literally act out the scenes in a dramatic fashion upon a podium set up in the middle of the factory. They worked without amplification, so they had to be able to project their voices. Most could look at text written in English or Italian and read it aloud in Spanish, the language of the factories.

Workers were both generous and ruthless to the lectors, depending on the performance. If they enjoyed the day’s reading, they would loudly tap their chavetas on their cutting boards as a form of applause. On the other end of the spectrum, workers could vocalize their unhappiness with a particular reading. Since the lector was paid by the workers, he or she took cues from them. The lector committee, not the lector, chose the materials to be read. This mattered very little to the factory owners. The lectors were forced out of the factories when what they were reading was deemed too radical. This caused widespread strikes and work slowdowns.

After a series of long and often violent strikes during the 1920s, over issues ranging from unions to the use of machines in the cigar-making process, factory owners began to replace the lectors with radios. In 1931, during the depths of the Depression and after another strike ended with a decrease in workers’ wages, the book also closed onla lectura. In the words of historians George Pozzetta and Gary Mormino “manufacturers replaced [the lectors] with radios, the final symbolic victory of the new industrial order over the cherished artisan privileges that had for so long sustained cigar workers”.