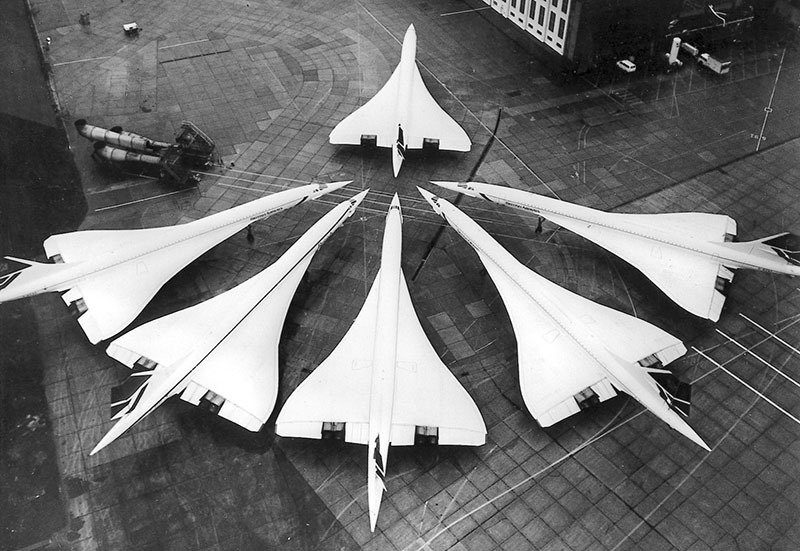 The entire British Concorde fleet in one picture, January 21, 1986, at London Heathrow Airport.

It is sad that it has been 13 years since the last concord flight. It took 3.5 hours from New York to London which is half the normal time. The main reason it was discontinued was cost. Its flight was limited to trans Atlantic because of the sonic boom and 9/11 didn’t help either. Its tickets were expensive and it wasn’t a very comfortable journey. Here is a great video that goes into detail about why it failed. 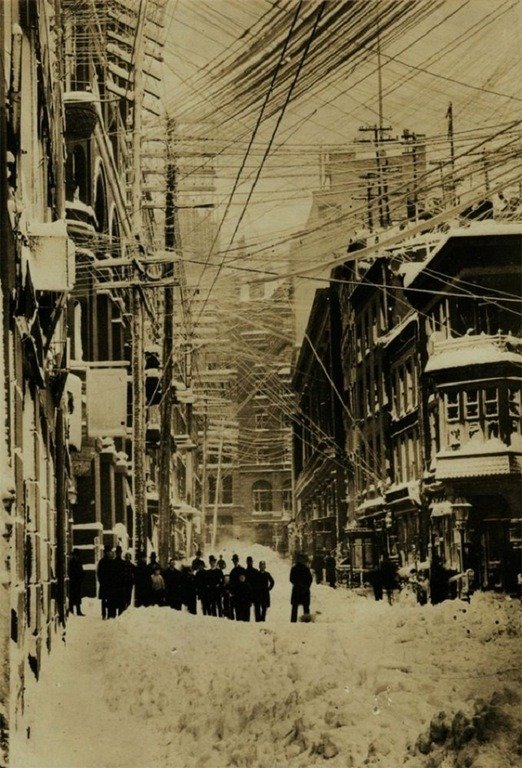 This is what led to the formation of Empire City Subway, a company that still exists today (currently owned by Verizon and is a separate company which rents space to Verizon and other telecoms in manholes and conduit systems) throughout Manhattan and The Bronx. Empire City Subway was the first company to have a franchise with the city for underground utilities and once rented to electric companies and telegraph companies. Electric was soon taken out of the system due to the obvious dangers. Manholes covers that say E.C.S. Co. Ltd. belong to Empire City Subway. Don’t confuse this with CT&ES (Consolidated Telegraph and Electrical Subway) which is now owned by Consolidated Edison. 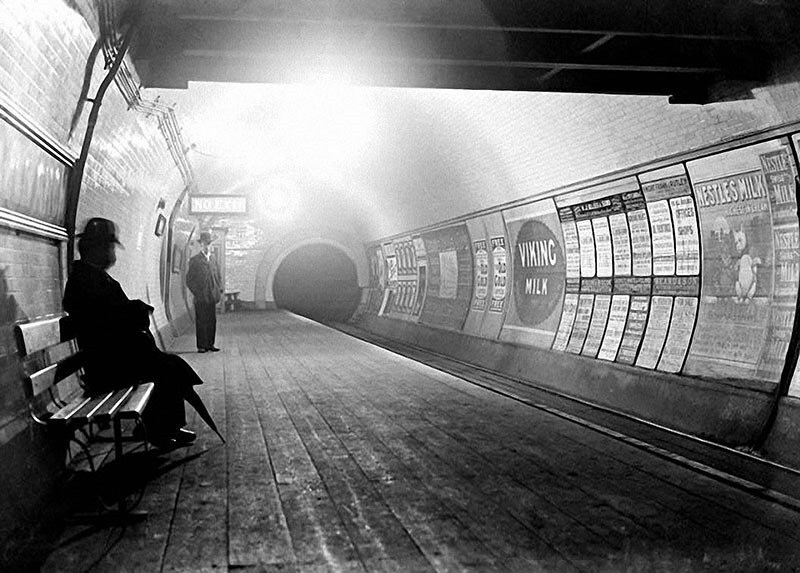 The London Underground during the Victorian Era, early 1900s.

Here’s a similar one of Marble Arch station today. 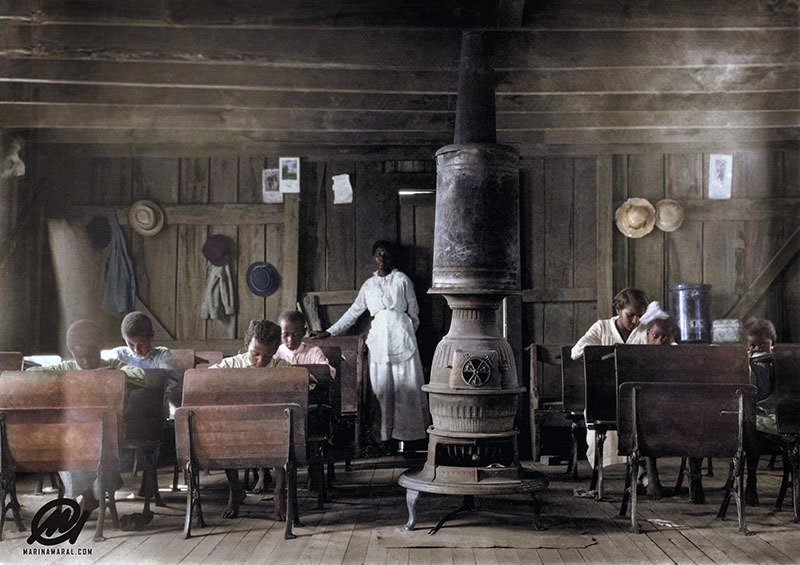 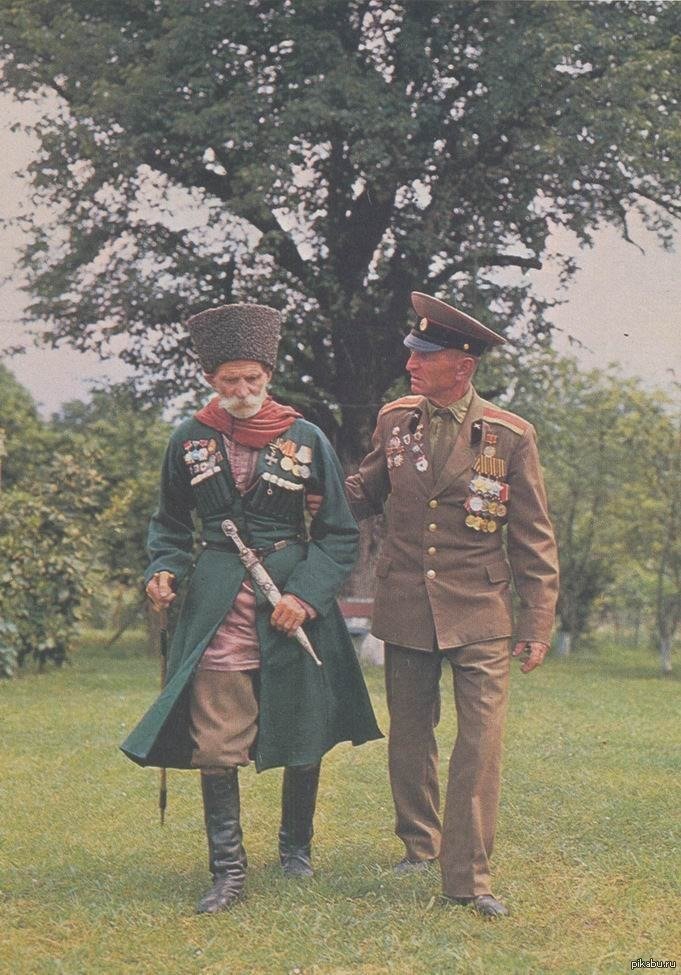 112 year old Teimuraz Vanacha, veteran of 1 World War and Russian Civil War, recipient of the Cross of Saint George, and his son Ivan Vanacha, full cavalier of the Orden of Glory. Abkhazia,1980. 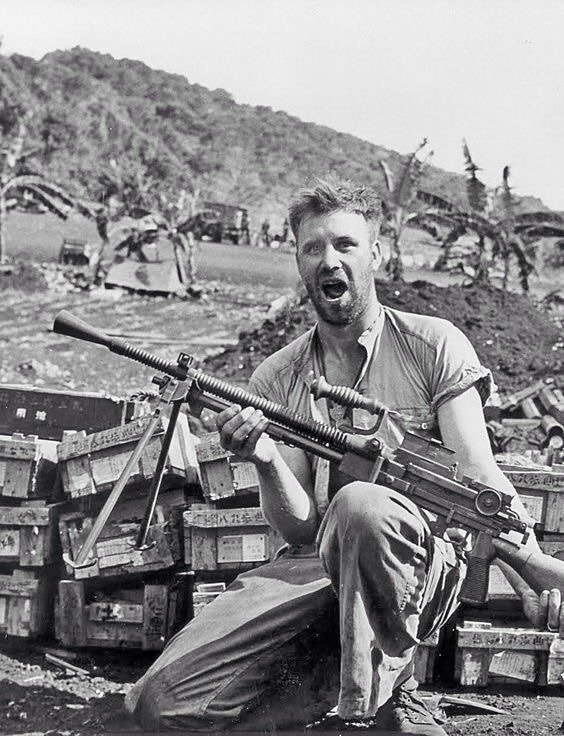 A U.S. Marine looks amazed while taking a photo showing a captured Japanese Nambu 99 machine gun after the Battle of Saipan, 1944. 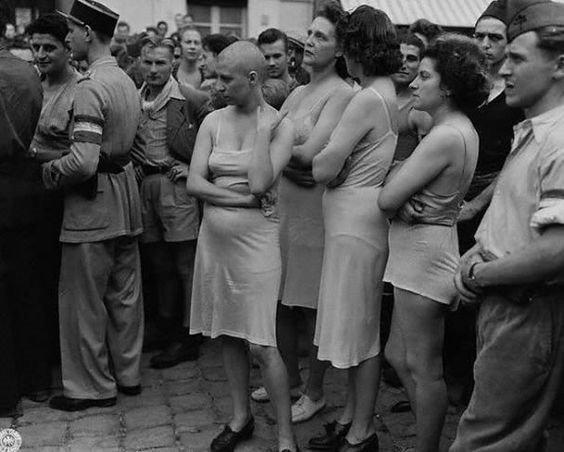 France was liberated in 1944, and women accused of having collaborated with Nazi personnel are humiliated in public.

Same thing happened in Denmark. They were called feltmadrasser, it directly translate as field mattresses, for fraternizing with the German occupiers. Some of them had their heir shaved but most just had a life long stigma making them social outcasts. The male collaborators were jailed or in some cases shot in what was basically semi sanctioned assassinations. It was a very chaotic time just after the war when the only policing force present was the resistance, who understandably held quite a grudge against those Danes that had helped the enemy. In some cases those collaborators outright betrayed resistance fighters to the Germans, which ended fatally for the resistance fighter more often than not. 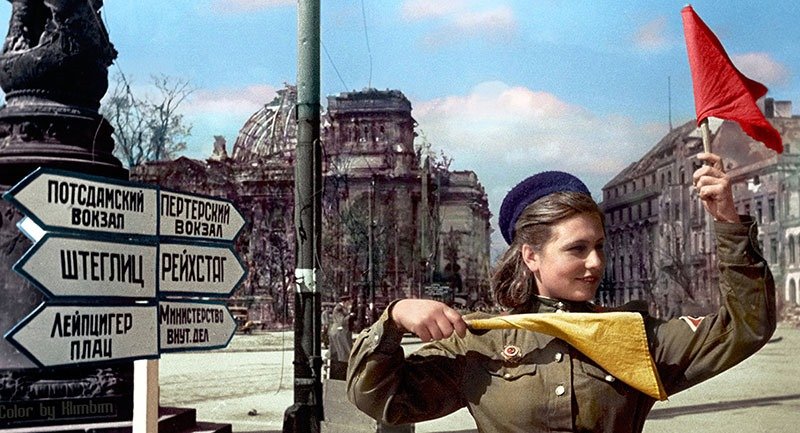 Red Army fighter controls traffic on the roads of Berlin, 1945. 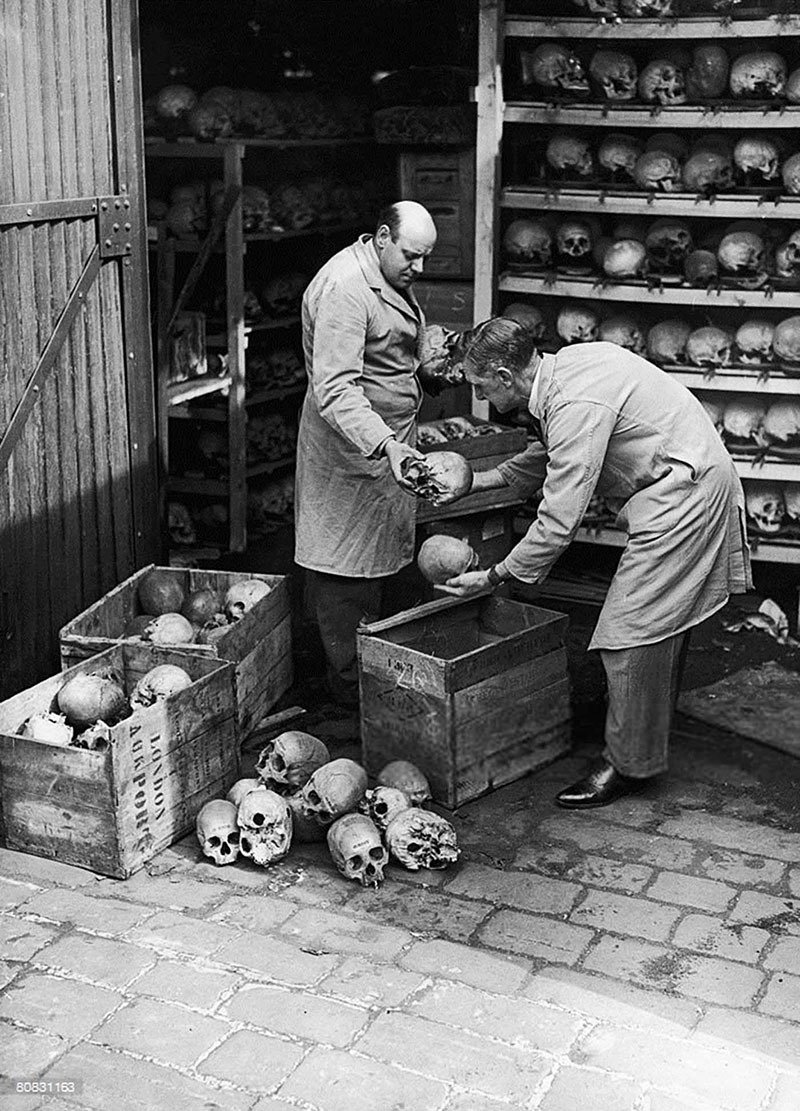 Attendants from the Hunterian Museum of the Royal College Of Surgeons packing up some of the 3,000 human skulls stored in a shed in Lincoln’s Inn Fields, London, before their transfer to the Natural History Museum, July 1, 1948. The skulls include those of Chinese pirates, Eskimos and Maoris. Each of the skulls has a serial/catalog number on the forehead.

Many institutions in the United Kingdom possess a variety of cultural items and human remains from countries around the globe. The vast collections stem from centuries of exploration and the growth of the British Empire through colonization. Collecting cultural items and human remains from other countries has been documented at least as far back as the fifteenth century. For the period after the fifteenth century these items, collected locally, were used to study differences in human populations and the origin of the human species, with items from overseas being brought back only if they were “rare or unusual specimens… for their curiosity value as well as for research”.

The nineteenth century marked an increase in the acquisition of human remains from various countries, predominantly those under colonial control. These were acquired for scientific purposes, to study evolution and the origin of the human species, as well as in response to “a desire to preserve mementos of what were believed to be vanishing races”. These remains were acquired from a variety of sources, including transfers from foreign museums and trade with indigenous people. Some remains were acquired without consent from the indigenous population in colonial times when there was an uneven balance of power.

Since the 1990s many Western countries have implemented laws to return the human remains from former colonies or conquered peoples. New legislation includes the 1990 Native American Graves Protection and Repatriation Act in the US, and the 2004 Human Tissues Act in the UK. 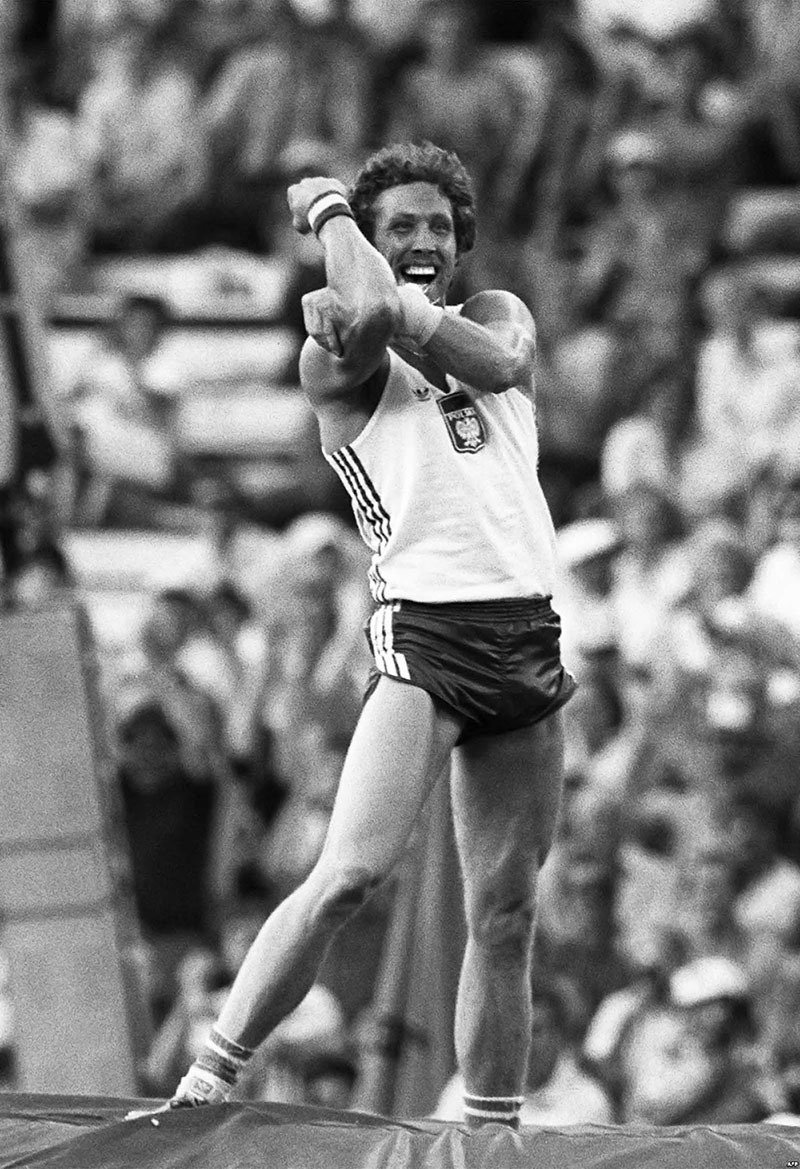 By the late 1970s it was clear that Russians were no longer particularly liked in Poland. The reverse was also probably true. Władysław Kozakiewicz felt this in person as he ran up to take his jump at the 1980 Summer Olympics. The 1980 Summer Olympic Games were already mired by controversy even before they opened. The United States led the boycott of 64 other countries in protest of the 1979 Soviet invasion of Afghanistan.

The crowd supporting Soviet jumper Konstantin Volkov booed, hissed, jeered, and whistled during Kozakiewicz’s performance. After he had cleared the bar with a new world record of 5.78 meters, Kozakiewicz leapt to his feet in joy, turned to the spectators, placed his left hand on his right arm, and made a fist as he raised his arm in defiance to the Soviet crowd. The photos of this incident circled the globe, with the exception of the Soviet Union and its satellites, although the event was broadcast live on TV in many countries of the Bloc. Video of the jump.

After the Olympics, the Soviet ambassador to Poland demanded that Kozakiewicz be stripped of his medal over his “insult to the Soviet people”. The official response of the Polish government was that the gesture had been an involuntary muscle spasm caused by his exertion.

Back in Poland in 1980, Kozakiewicz’s act received much support in Polish society, which resented Soviet control over Eastern Europe (Poland was in the midst of labor strikes that led to the creation of the labor union Solidarity less than two months later). In Polish culture the so-called “Kozakiewicz Gesture” / “Gest Kozakiewicza” still works a symbol of resistance. After the scandal in Moscow Władysław Kozakiewicz was no longer a welcome figure for sporting officials loyal to the Communist Party. As a result he was continually the victim of arbitrary chicanery. When he was banned from taking part in sporting events abroad in 1985 he traveled of his own accord to a tournament in Germany, never to return. He was given German citizenship and even appeared in a few tournaments for the German athletics team. From 1986 to 1988 he was German pole vault champion.