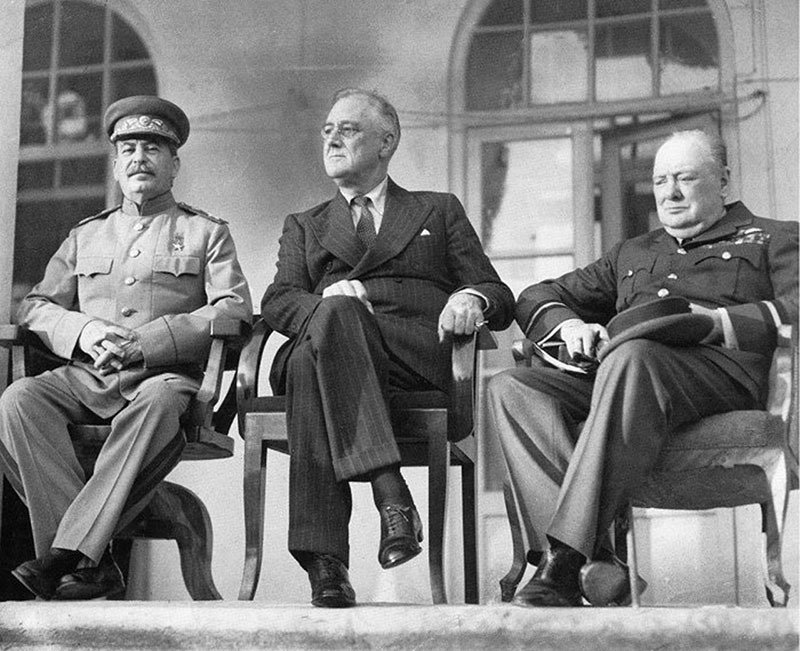 The “Big Three” – Stalin, Roosevelt and Churchill – meet at the Tehran Conference, 1943.

It’s heavily documented especially during that era how important chairs were to their leaders. So all 3 of these guys most likely most definitely took their favorite chairs with them wherever they went in case they had to sit down. This is why there are 3 different chairs in the photo. FDR actually had quite few favorite chairs according to one historian and one of them even had wheels. 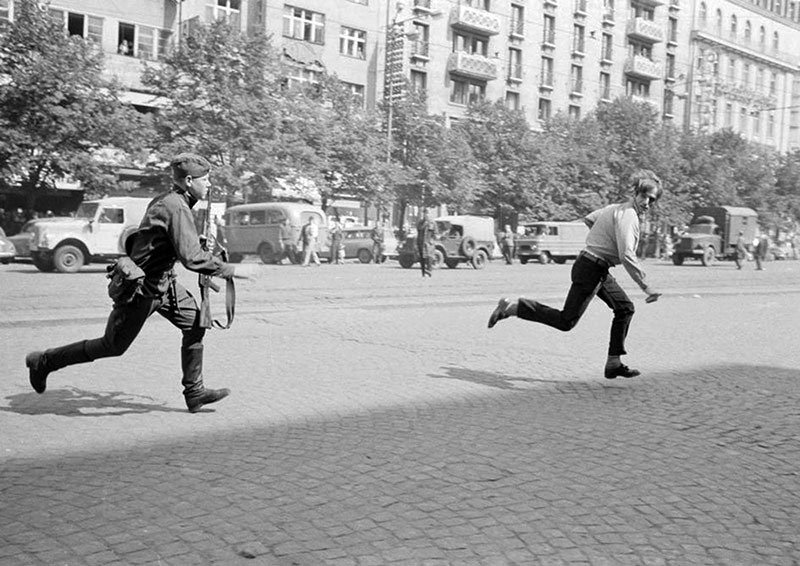 Soviet soldier chasing young man who had thrown stones at a tank during the Prague Spring in 1968.

Prague Spring was brief period of liberalization in Czechoslovakia under Alexander Dubcek in 1968. Soon after he became first secretary of the Czechoslovak Communist Party on January 5, 1968, Dubcek granted the press greater freedom of expression; he also rehabilitated victims of political purges during the Joseph Stalin era. In April he promulgated a sweeping reform program that included autonomy for Slovakia, a revised constitution to guarantee civil rights and liberties, and plans for the democratization of the government. Dubcek claimed that he was offering “socialism with a human face”. Evidence of the transformation was immediately apparent – young men grew their hair, women wore mini skirts, anti-state newspapers appeared, films and plays long since banned by the regime reappeared, including the work of dissident playwright, Vaclav Havel.

In July 1968, Brezhnev, fearing Czechoslovakian independence, met with Dubcek and demanded that he re-impose strict communist control over his people and ordered Dubcek to reign in his ‘counter-revolutionary’ methods. Dubcek promised to compromise but over the coming weeks, it became clear to Moscow that nothing was being done.

Half a million Soviet troops (including token numbers from Bulgaria, Hungary, East Germany and Poland) and 2,000 tanks moved in quickly, taking control of Prague’s airport and vital points of communication before making a forceful presence on the streets of the capital. Dubcek told his people not to resist. But if the Soviet soldier expected a warm welcome by the good people of Czechoslovakia, as Moscow had told them, they were soon disabused of the idea as Czechoslovakian youths threw stones at their tanks. But faced with such a show of strength, unarmed resistance, limited as it was, soon crumbled. Eleven Soviet soldiers and 72 civilians were killed. Dubcek’s reforms were repealed, and the leader himself was replaced with the staunchly pro-Soviet Gustav Husak, who re-established an authoritarian Communist regime in the country. 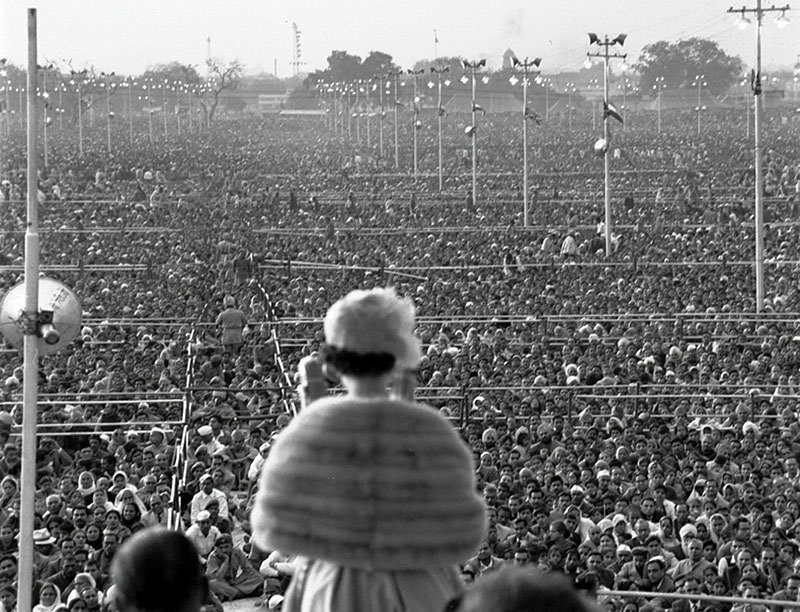 Britain’s Queen Elizabeth II addresses a vast gathering of more than a quarter of a million at the Ramlila Grounds, a huge public meeting place outside the walls of Old Delhi, India (1961). 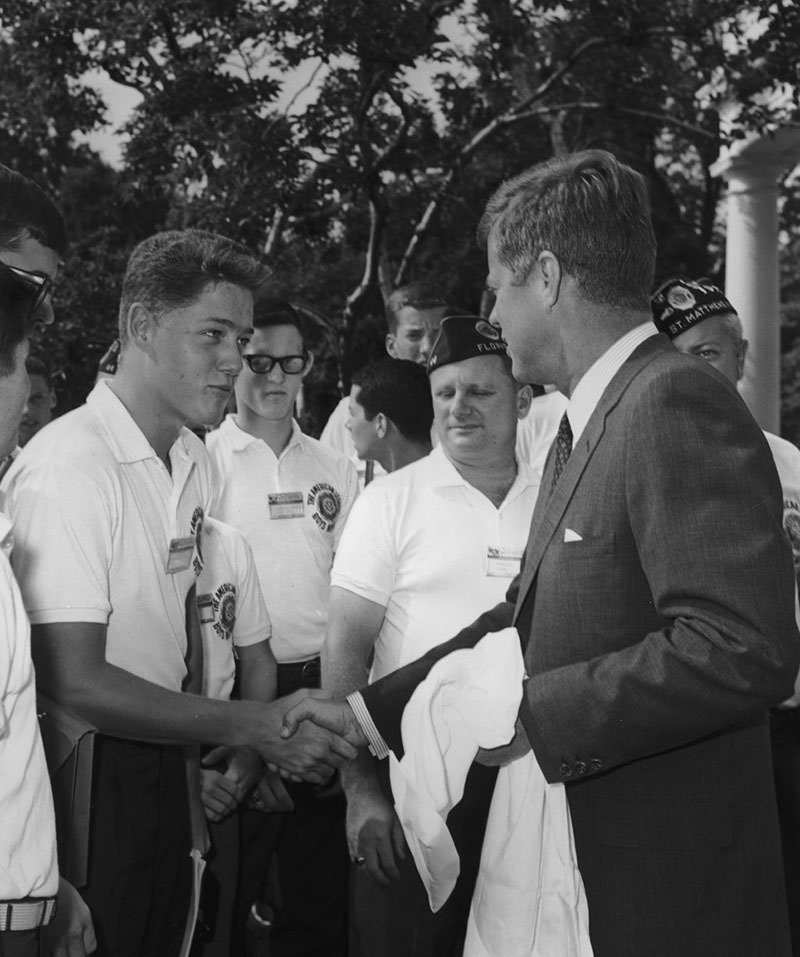 Bill Clinton as a teenager shakes President John F. Kennedy’s hand, Washington DC, 1963. Apparently, Clinton later admitted he pushed his way to the front to ensure he got a picture with JFK. 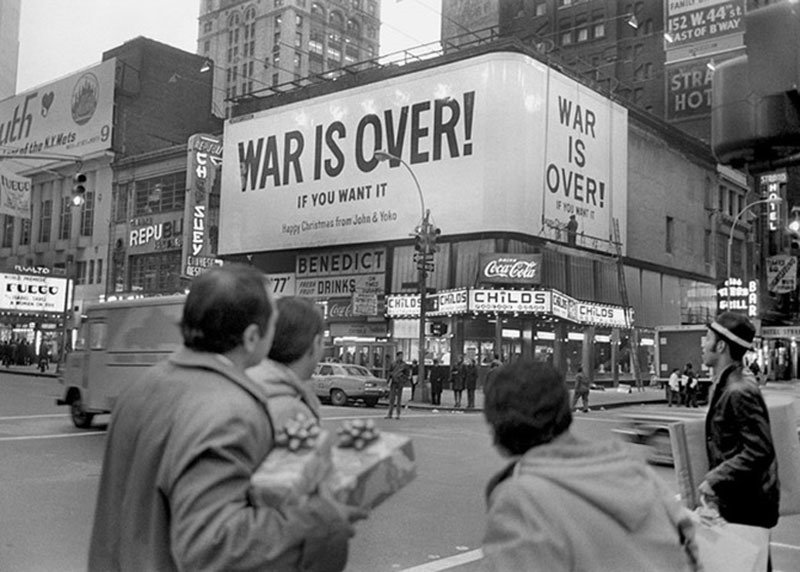 John Lennon and Yoko Ono’s billboard in Times Square during the increasing opposition of continuing the Vietnam War, 1969.

“Happy Xmas (War Is Over)” was the culmination of more than two years of peace activism undertaken by John Lennon and Yoko Ono that began with the bed-ins they convened in March and May 1969, the first of which took place during their honeymoon.

The song’s direct antecedent was an international multimedia campaign launched by the couple in December 1969 – at the height of the counterculture movement and its protests against America’s involvement in the Vietnam War – that primarily consisted of renting billboard space in 12 major cities around the world for the display of black-and-white posters that declared “WAR IS OVER! If You Want It – Happy Christmas from John & Yoko”. 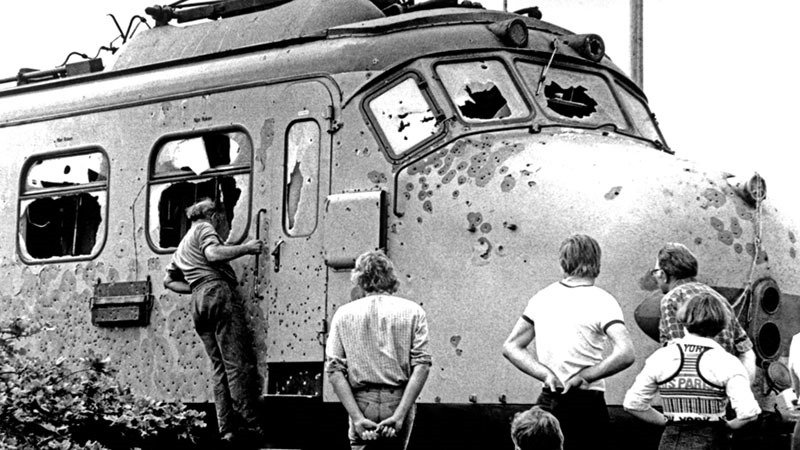 On May 23, 1977 a train hijacking took place close to Drentsche Aa river bridge at de Punt (in the village of Glimmen) on the provincial border between Groningen and Drenthe, northeastern Netherlands. Nine armed Moluccans pulled the emergency brake around 9 AM and took about 50 people hostage. The hijacking lasted for 482 hours (20 days); two hostages and six hijackers were killed. 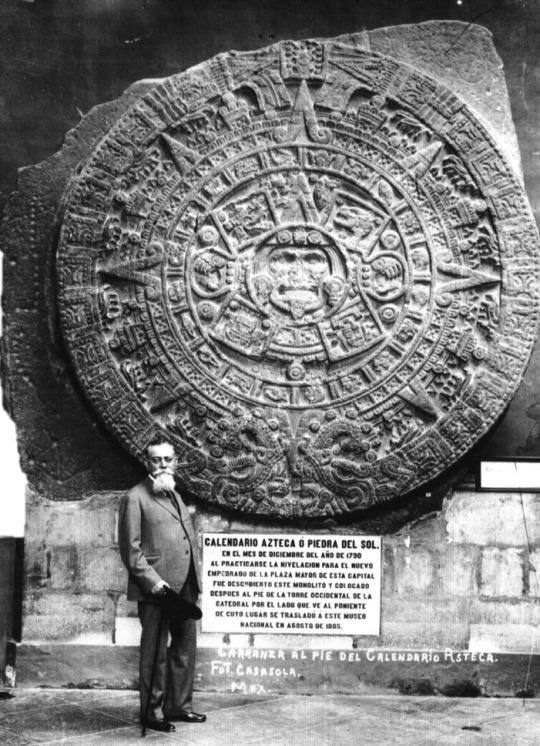 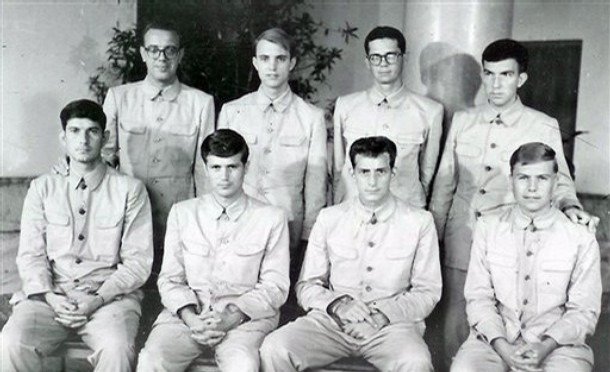 The crew of the USS Pueblo, subtly flipping their North Korean captors the bird, 1968.

They were captured after their spy ship got raided by the North Korean Navy. The ship is still in North Korea, and if you ever visit the country, it is a mandatory tour site. They crew returned after extensive negotiations between the States and DPRK. 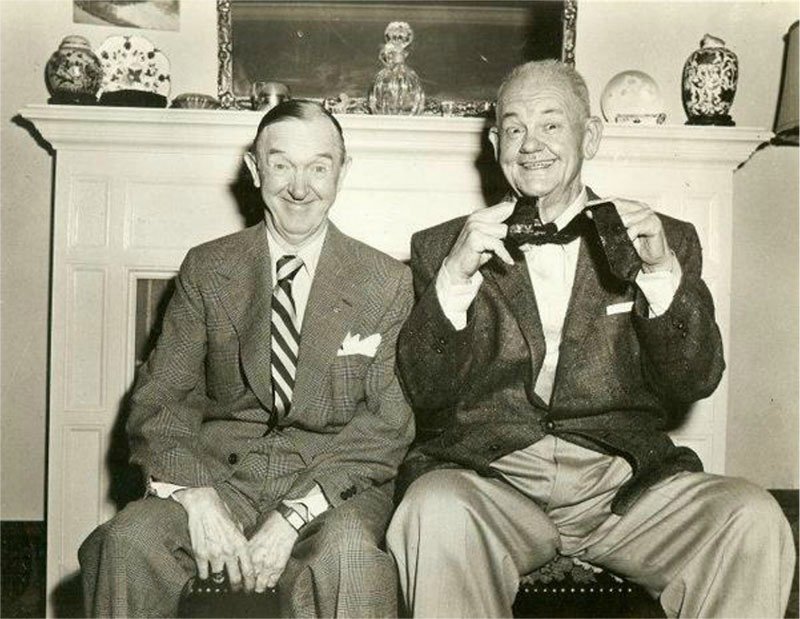 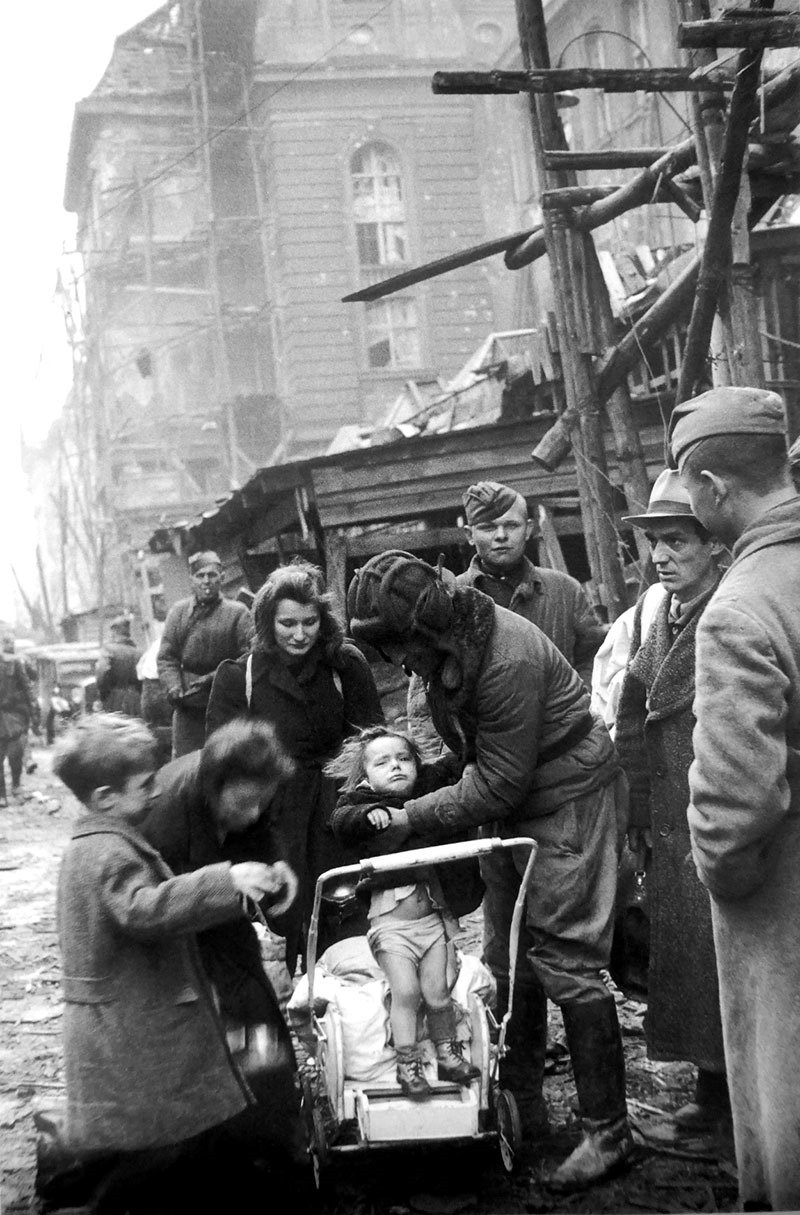 Soviet soldiers try to engage a less than cooperative German toddler for a photograph in the ruins of Monbijoustraße in defeated and Soviet occupied Berlin as the child’s mother looks on in resignation. May 1945.