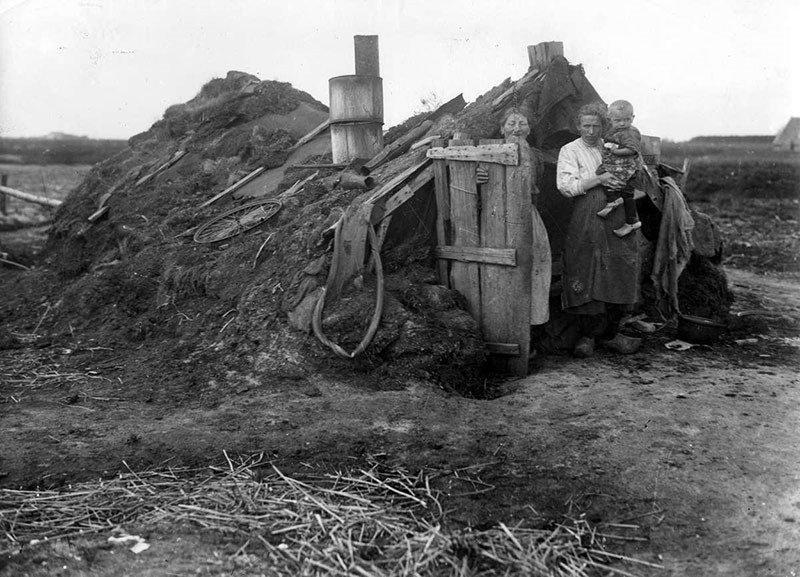 Before the war many poor Dutch families lived in sod houses. Drenthe, Netherlands, 1936.

Sod houses were also a prominent feature of the Canadian prairie right up until the early ’30s. They were very popular with homesteaders as a speedy-to-construct temporary dwelling, while they devoted the bulk of their first two years’ labor to “proving up” their quarter of land (that is, fulfilling the multiple conditions of homestead ownership), and until they could afford the time and money to build something more suitable out of local wood.

The walls of a one-room house would be constructed of tough, dense virgin sod. They would begin as a ribbon of black earth hundreds of feet long, typically 14 to 18 inches wide and 4 to 6 thick, cut out of the living prairie and simultaneously turned roots-up by a horse- or ox-drawn shank plow. Individual blocks would then be knife-cut about two feet in length, so each would be roughly the size of 2 or 3 modern coir welcome mats, stacked. The blocks would be interlocked like bricks to form walls of a suitable height, then left to compress under their own weight for a few days. A stout tree trunk spanning the two peaks would make a serviceable ridge pole (it’s collapsed in the above picture), smaller trunks the angled rafters, and thick branches and saplings would be woven into a dense, compact wattle that would support the individual sod “shingles”.

Soddys carried several unique advantages. Firstly, in a time and place where many had to first chop down and limb, then season and eventually hand-rip their own lumber, they were much faster to erect than building an equivalent structure out of the contents of one’s own woodlot. If one’s family was still living under the pitiless prairie sky in a canvas tent or Red River cart (a small, single-axle covered wagon), the closer winter approached, this immediacy would become more and more important. Secondly, a sod house cost almost nothing to build; the only parts that actually required money were a few tiny windows (assuming you didn’t want to make do with shutters) and a few big spikes to secure the roof joists. Unless of course, you wanted to spend time and effort carefully hand-mortising, auguring and pegging the whole roof frame together.

Thirdly, compared to an uninsulated, single-room wooden shack with a split-shake roof, a sod structure was far more liveable: cooler in the scorching heat of prairie summers, and much warmer and more windproof in the bitter winters. Unlike a wood-sheathed building, its walls were thick, self-insulating, and more-or-less thermally stable, so they usually did a good job of regulating the interior temperature. Sometimes a simple stucco of mud, lime and manure would be overlaid to the wind- and waterproof the whole exterior, but more usually a dense mixture of mud and chopped straw was used to selectively pack holes, crevices, and thin spots. 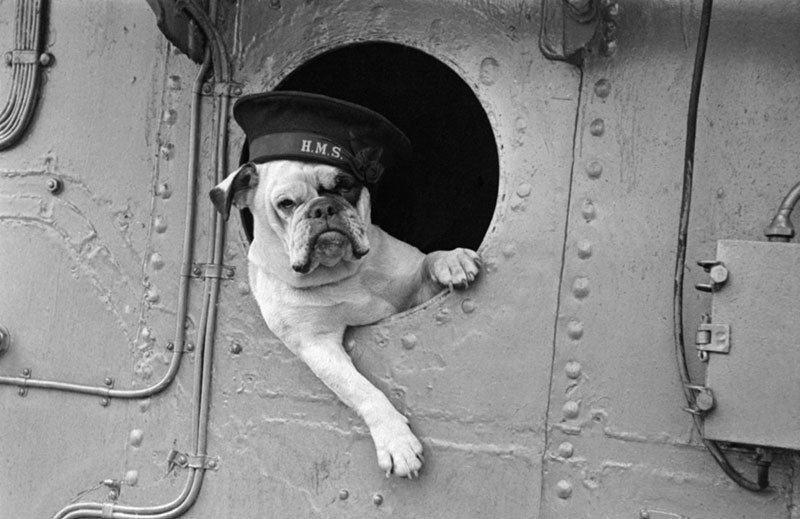 Venus the bulldog mascot of the British destroyer HMS Vansittart, circa 1941. 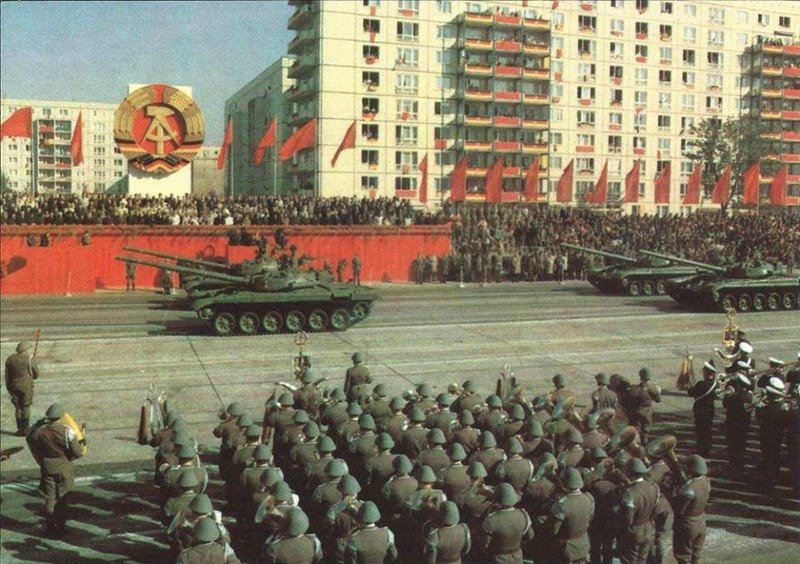 Tanks on parade in Berlin for the 30th anniversary of East Germany, 7 October 1979. 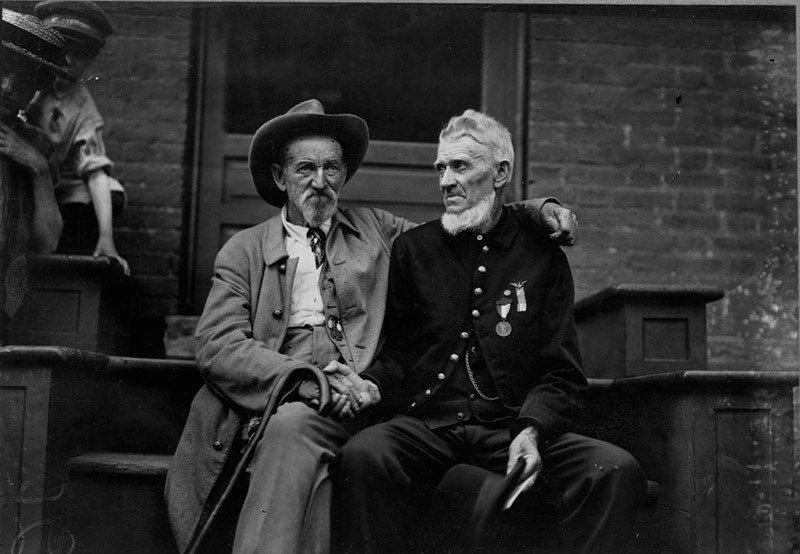 A veteran of the Union Army shakes hands with a Confederate veteran at the Gettysburg celebration, PA, circa 1913. 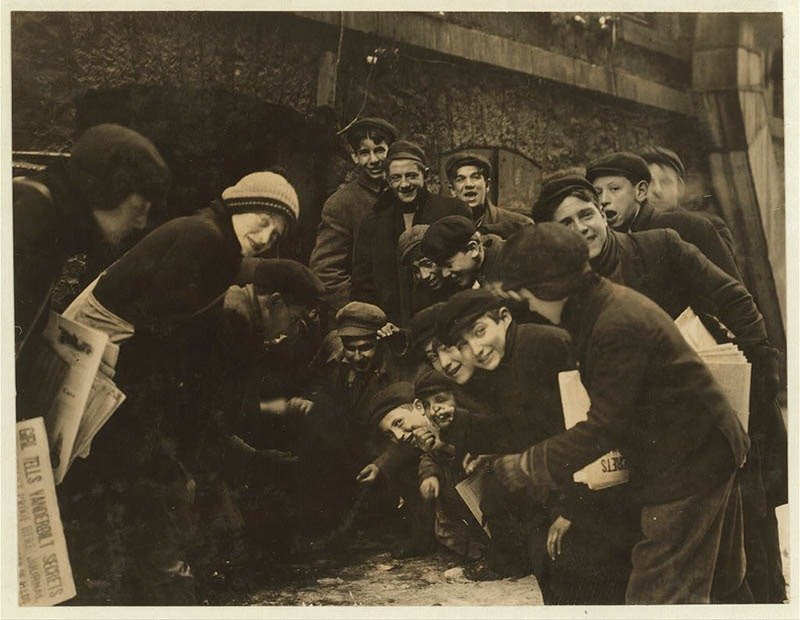 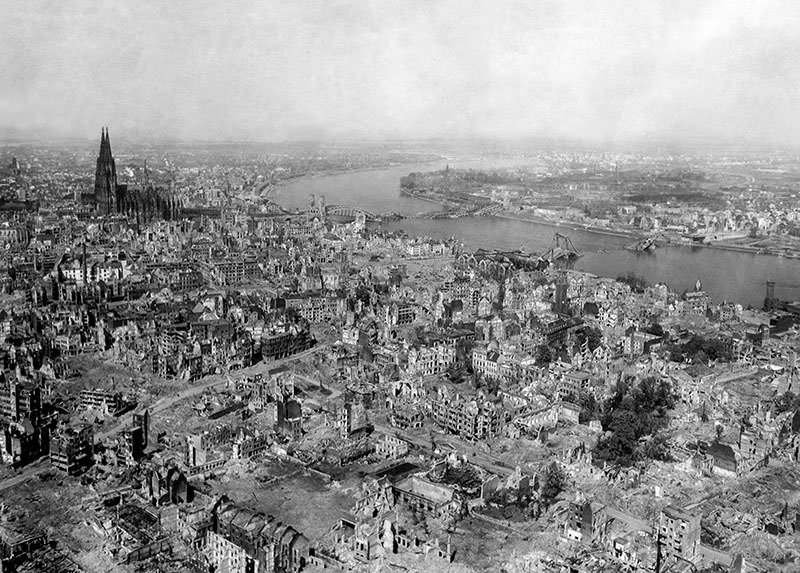 The German city of Cologne was bombed in 262 separate air raids by the Allies during World War II, 1945.

The German city of Cologne was bombed by the Royal Air Force (RAF) but for a single failed post-capture test of a guided missile by the United States Army Air Forces. A total of 34,711 long tons of bombs were dropped on the city by the RAF. While air raid alarms had gone off in the winter/spring of 1940 as British bombers passed overhead, the first bombing took place on 12 May 1940. The most notable attack on Cologne was the first 1,000 bomber raid on 30/31 May 1942. 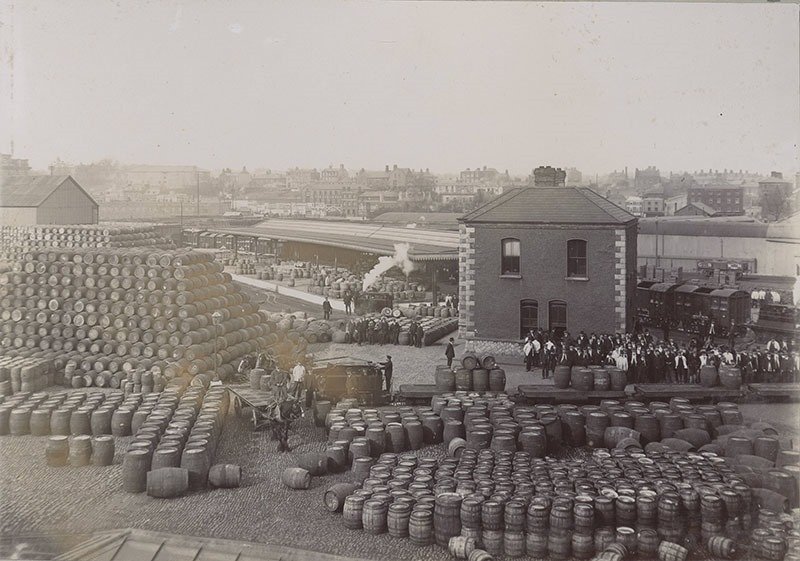 Originally leased in 1759 to Arthur Guinness at IR£45 (Irish pounds) per year for 9,000 years, St. James’s Gate has been the home of Guinness ever since. It became the largest brewery in Ireland in 1838, and the largest in the world by 1886, with an annual output of 1.2 million barrels. Although no longer the largest brewery in the world, it is still the largest brewer of stout in the world. The company has since bought out the originally leased property, and during the 19th and early 20th centuries the brewery owned most of the buildings in the surrounding area, including many streets of housing for brewery employees, and offices associated with the brewery. The brewery also made all of its own power using its own power plant. 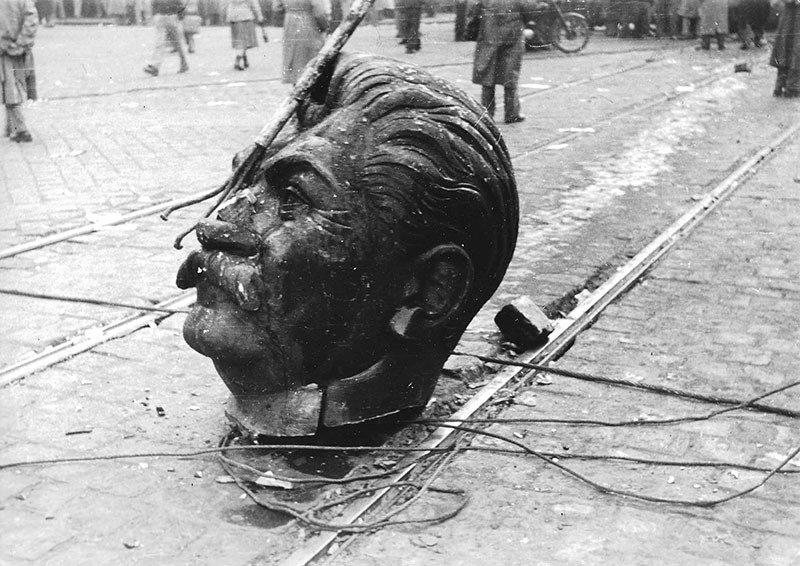 A disembodied statue of Joseph Stalin’s head on the streets of Budapest during the Hungarian Revolution, 1956.

Built as the birthday present to Stalin on his seventieth birthday (December 21st, 1949), the Stalin Monument in Budapest has become the iconic scene of the Hungarian Uprising in 1956.

The monument was erected on the edge of Városliget, the city park of Budapest. The large monument stood 25 meters tall in total. On October 23, 1956, around two hundred thousand Hungarians gathered in Budapest to demonstrate in sympathy for the Poles who had just gained political reform during the Polish October. The Hungarians broadcasted sixteen demands over the radio, one of them being the dismantling of Stalin’s statue.

A hundred thousand Hungarian revolutionaries demolished the Stalin statue, leaving only his boots, in which they planted a Hungarian flag. The bronze inscribed name of the Hungarians’ leader, teacher and “best friend” was ripped off from the pedestal. Before the toppling of the statue, someone had placed a sign over Stalin’s mouth that read “Russians, when you run away don’t leave me behind!”. The revolutionaries chanted “Russia go home!” while pulling down the statue. “W.C.” and other insulting remarks were scrawled over the fragmented parts of the statue. 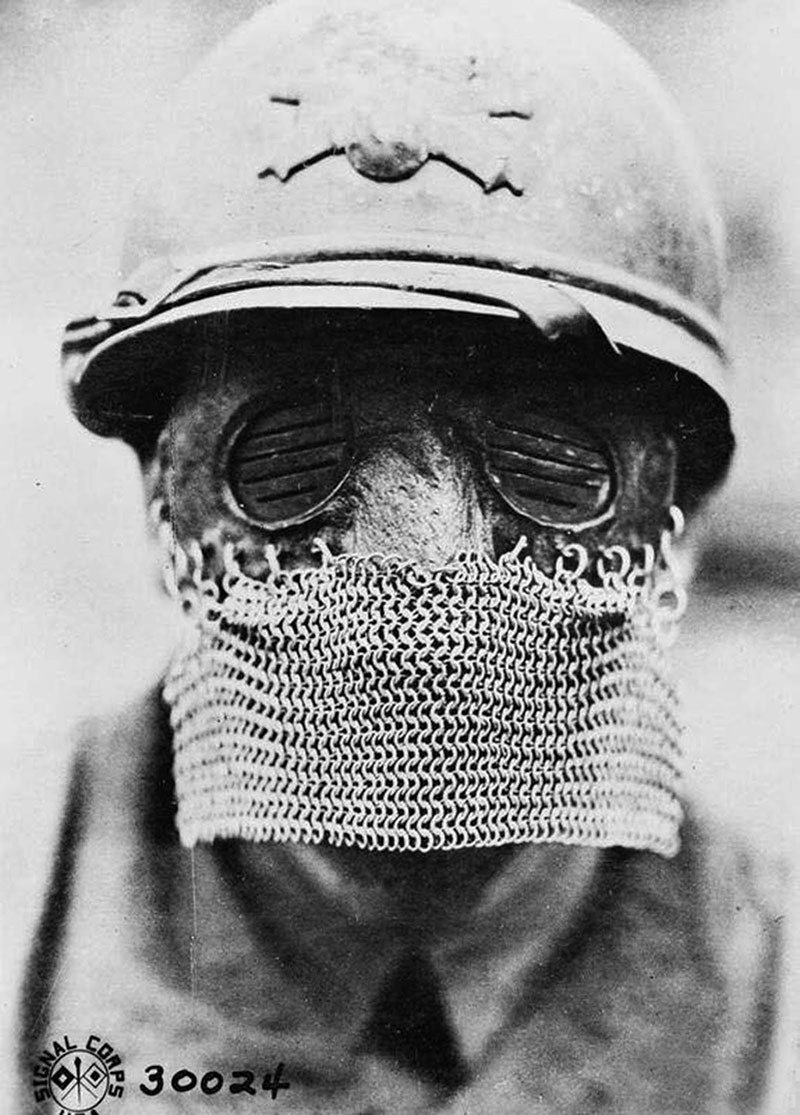 A British tank crew splatter mask was designed to help protect the crewmember’s face from shrapnel when looking through the view ports. The eye covers were metal, the mask was leather and there was a chainmail skirt to cover the mouth and chin. Various styles were worn by all sides.

The main reason of this mask’s existence was due to a terrible issue in the tanks during First World War called spalling. Basically, spalling occurs because the energy from the impacting round is transferred to the armor plate. This sends a shockwave through the armor plate, displacing the metal until the other side of the wall is reached by the shockwave. Since the armor plate can’t transfer the energy to anything else, fragments are ripped loose from the inside of the armor plate and are slung into the fighting compartment at very high lethal velocity. The thicker the armor, the less likely it is for spalling to occur, and the British Mark I-V Tanks (these particular masks were worn by British Mark I-V tank crews) had very thin armor. 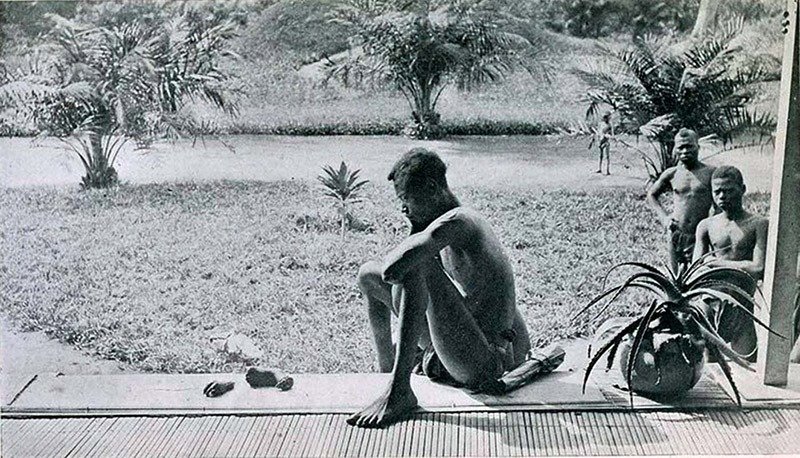 Father stares at the severed hand and foot of his five-year-old, severed as a punishment for failing to make the daily rubber quota, Belgian Congo, 1904.

The photograph is by Alice Seeley Harris, the man’s name is Nsala. Here is part of her account (from the book “Don’t Call Me Lady: The Journey of Lady Alice Seeley Harris”): He hadn’t made his rubber quota for the day so the Belgian-appointed overseers had cut off his daughter’s hand and foot. Her name was Boali. She was five years old. Then they killed her. But they weren’t finished. Then they killed his wife too. And because that didn’t seem quite cruel enough, quite strong enough to make their case, they cannibalized both Boali and her mother. And they presented Nsala with the tokens, the leftovers from the once living body of his darling child whom he so loved. His life was destroyed. They had partially destroyed it anyway by forcing his servitude but this act finished it for him. All of this filth had occurred because one man, one man who lived thousands of miles across the sea, one man who couldn’t get rich enough, had decreed that this land was his and that these people should serve his own greed. Leopold had not given any thought to the idea that these African children, these men, and women, were our fully human brothers, created equally by the same Hand that had created his own lineage of European Royalty.

The Congo Free State was a corporate state in Central Africa privately owned by King Leopold II of Belgium founded and recognized by the Berlin Conference of 1885. In the 23 years (1885-1908) Leopold II ruled the Congo he massacred 10 million Africans by cutting off their hands and genitals, flogging them to death, starving them into forced labor, holding children ransom and burning villages. The ironic part of this story is that Leopold II committed these atrocities by not even setting foot in the Congo. Under Leopold II’s administration, the Congo Free State became one of the greatest international scandals of the early 20th century.