Here are 25 Kickass and Interesting Facts About Inception. 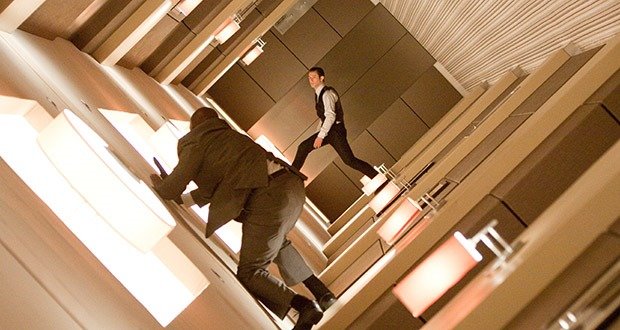 1. In spite of the films extensive surreal effects sequences, the majority special effects throughout the film, such as the Penrose stairs, rotating hallway, mountain avalanche, and zero gravity sequences, were created through practical methods, not through the use of computer generated imagery. The film only has around 500 visual effect shots, as opposed to most other visual effects epics which can have upwards of 2000 VFX shots.

2. In an effort to combat confusion, television broadcasts in Japan included text in the upper-left corner of the screen to remind viewers which level of the dream a specific scene takes place in.

3. In an interview with ‘Entertainment Weekly’, Christopher Nolan explained that he based roles of the Inception team similar to roles that are used in filmmaking – Cobb is the director(Leonardo DiCaprio), Arthur(Joseph Gordon-Levitt) is the producer, Ariadne(Ellen Page) is the production designer, Eames(Tom Hardy) is the actor, Saito is the studio, and Fischer is the audience. “In trying to write a team-based creative process, I wrote the one I know,” said Nolan.

4. The slow, gloomy, blaring trombones in the main theme of the film score are actually based on an extremely slowed down version of the fast, high pitched trumpets in the beginning of the Édith Piaf song “Non, je ne regrette rien,” which is used as a plot device in the film. Furthermore, when music is heard by someone who is currently within a dream, the music is perceived as slowed down. Thus, the main theme of the film score is almost exactly what the beginning of “Non, je ne regrette rien” would sound like to a dreamer. This thematic device is brought to its logical conclusion when the song plays at the end of the credits, signaling that the audience is about to ‘wake up’ from the film.

5. Joseph Gordon-Levitt performed all but one of his own stunts during the fight scene in the spinning hallway. 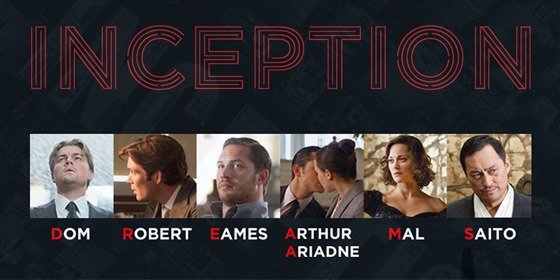 6. If you take the first letters of the main characters’ names – Dom, Robert, Eames, Arthur, Mal and Saito – they spell “Dreams”. If you add Peter, Ariadne and Yusuf, the whole makes “Dreams Pay”, which is what they do for a mind thief.

7. Christopher Nolan first pitched the film to Warner Bros. after the completion of his third feature, Insomnia (2002), and was met with approval from the studio. However, it was not yet written at the time, and Nolan determined that rather than writing it as an assignment, it would be more suitable to his working style if he wrote it as a spec script and then presented it to the studio whenever it was completed. So he went off to write it, thinking it would take “a couple of months”, but it ultimately took nearly eight years.

8. “Yusuf” is the Arabic form of “Joseph”, the Biblical figure from Genesis 37-50, who had the gift of interpreting dreams. He was sold out by his brothers to slavery. Through his gift of dream interpretation he helped Pharaoh to prepare for the disaster of the “seven lean years” and was rewarded as a result. The same story is also told in the Quran.

9. The running time of 2 hours 28 min is a reference to the original length of Édith Piaf’s song “Non, je ne regrette rien”, which lasts (on its first recorded edition) 2 minutes 28 seconds.

10. When explaining why he thinks implanting an idea is not possible, Arthur says “don’t think about elephants” to actually make Saito think of them and thus “insert” an idea into his mind. The line is a reference to the title of a famous cognitive semantics book, ‘Don’t Think of an Elephant’ by George Lakoff. The book describes conceptual framing, the use of certain words to literally insert certain ideas about a subject into the listener’s mind in a surreptitious way, e.g. implanting the idea that taxes are a bad thing by using the phrase “tax relief.” 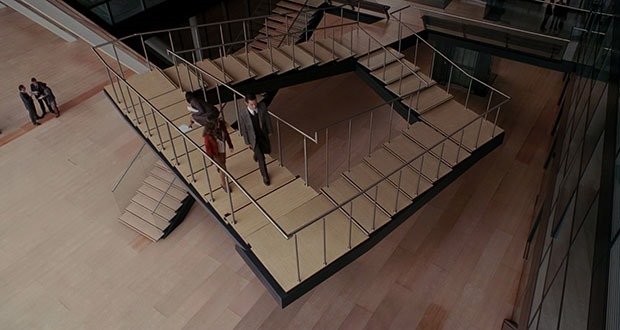 11. The “Penrose stairs” (with a woman perpetually picking up papers) that Arthur shows Ariadne is a reference to a lithograph print by the Dutch graphic artist M.C. Escher. The print is usually called “Ascending and Descending” or “The Infinite Staircase”, and was first printed in March 1960; Escher is well-known for his drawings exploring optical illusions and real architectural, mathematical, and philosophical principles rendered in fantastical ways.

12. Marion Cotillard’s character is called ‘Mal’, short for name ‘Malorie’, a name derived from French word ‘malheur’, meaning misfortune or unhappiness. The shorter version ‘mal’ means wrong/bad or evil (when a noun) in French, as well as some other Latin-based languages.

13. As of 2015, this is the last movie shot on film, not digitally, to win an Academy Award for Best Cinematography; all of the winners since have been shot digitally.

14. In the city scene on the first level of the dream with Fischer, the state motto on the license plates of the cars reads “The Alternate State.” 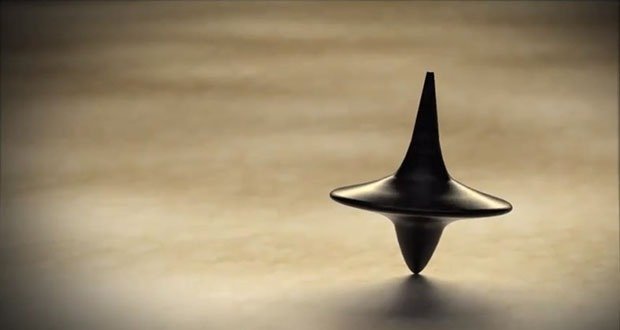 16. Mal’s totem, a spinning top, is (probably) a reference to the Clifford D. Simak’s story ‘Ring Around the Sun’ where the spinning top is used as a way to skip from one parallel Earth to another (by way of helping characters to concentrate).

18. The train scene from Inception was not a CGI. The crew fitted a tractor truck to look like a diesel locomotive and smashed cars with it.

19. Pete Postlethwaite, the actor who played the dying Maurice Fisher in Inception was really dying of cancer. He died 5 months after the film’s release.

20. This movie shares many similarities with ‘The Dream of a Lifetime,’ a Donald Duck comic released eight years before it. 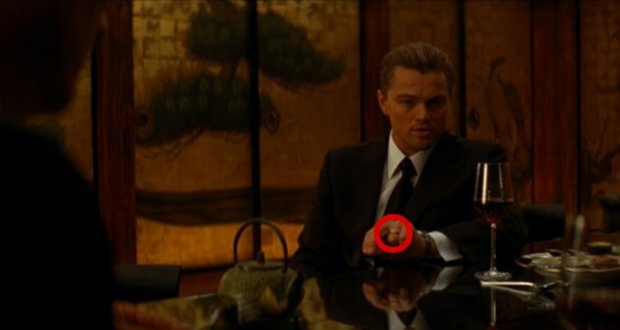 21. Not counting flashbacks, Cobb’s wedding ring only appears in scenes where he is dreaming. Many times in the film, the scene cuts away just as Cobb’s left hand comes into view.

22. When Cobb gave Ariadne the puzzle test, Ariadne’s final solution was a diagram of King Minos’ Labyrinth. Ariadne is the name of King Minos’ daughter in the same mythology.

23. During an interview Christopher Nolan addressed the ambiguous ending, saying he believes Cobb makes it home to his children, although it is open to interpretation by the viewer. He further claimed that the point of not seeing whether or not the top stops spinning is that Cobb no longer obsesses over his dreams.

24. When Cobb asks his kids what they have been doing at the end of the movie they answer (turn on captions), “building a house on a cliff,” referring one back to the beginning of the movie of Saito’s house on a cliff. The movie explains to the audience the significance of Fischer’s number in that it will subconsciously keep reappearing in dreams (e.g. the phone number, hotel rooms, safe combo); in light of this, the audience can watch the whole movie prepared and notice that the train that ran Cobb and Mal over in Limbo had a number on it. A combination of those numbers is used on the taxi cab that Mal and Cob get out of in the “real world,” as well as in their hotel room in the “real world.” Suppose the whole movie was a dream. If it was, then Nolan cleverly made the movie exactly 2 hours and 28 minutes for a reason, the song continually played to wake people up “from the dream” is 2 minutes 28 seconds.

25. Ariadne’s hair is in a tight bun in the hotel sequence so filmmakers didn’t have to figure out how her hair should move in zero-gravity.

AskReaders: What do you not fu*k with?