Here are 25 Kickass and Interesting Facts About Jurassic World. 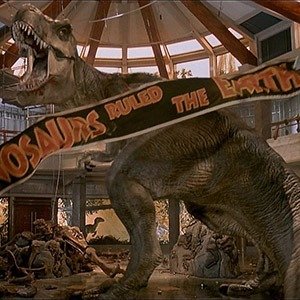 1. According to the filmmakers, the T-Rex in the film is the same T-Rex that appeared in the original Jurassic Park. She bears visible scars from the climactic fight with the Velociraptors in the first film.

2. New Orleans has an abandoned Six Flags theme park which has been used for other film productions in the past. Jurassic World created a 300-foot by 200-foot Main Street and Boardwalk in the amusement park’s abandoned parking lot. They shot on the set for two and a half weeks.

3. Jimmy Buffett has a very brief flash of a cameo, appropriately carrying two margaritas. A branch of his “Margaritaville” restaurant chain can be seen on the Jurassic World “City Walk”.

4. This is the first Jurassic Park film to not have animatronic dinosaurs created by Stan Winston, as he passed away in 2008. Instead the animatronics were created by effects studio Legacy Effects, a company formed from Winston’s former workshop staff. One of the shops in Jurassic World, Winstons, is named in Stan’s honour. 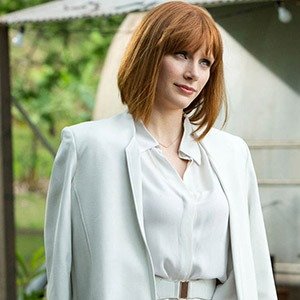 6. Bryce Dallas Howard (Claire) is seen running in high heels the entire movie. On an appearance with Chris Pratt on The Late Late Show with James Corden (2015), Howard said she did ankle exercises and “trained for running in heels as if I was in the Olympics.” Pratt then demonstrated how to run in high heels after the late night host, James Corden, surprised him with a pair of red high heels.

7. The cameo by Jimmy Fallon is a homage to the cameo he makes in the Universal Studios tram tours. He discusses similar safety instructions and also uses the same type of humor in both.

8. In an interview on the Tonight Show with Jimmy Fallon, Bryce Dallas Howard says that the little boy hugging the long neck in the petting zoo is her real-life son.

10. When Zach and Gray find the main building of the original Jurassic Park visitors center, it is decaying and overrun with vines. There’s a lot hidden within this scene, including the “When Dinosaurs Ruled The Earth” banner that fell after the T-Rex’s final attack, as well as the bones of the staged Dino-fight. There’s also the back-lit painting of a raptor, just like the one behind which a Raptor stalked Lex and Tim. Best of all, Gray plays with the night-vision goggles that were featured in the T-Rex sequence. 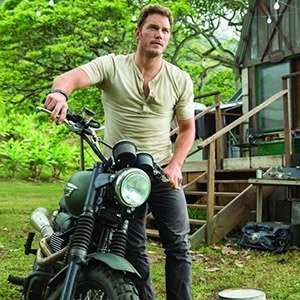 11. For the season two Parks and Recreation DVD (2010), Chris Pratt made a behind the scenes video. In the video he reads a fake text from Steven Spielberg about being cast in ‘Jurassic Park 4’. Jurassic World is in fact the fourth film in the series.

12. The original script was written in three weeks and the studio was pushing for a quick June start. Steven Spielberg decided that they needed some more time to make the movie good, and he had the pull to shut the production down before it started prematurely. Spielberg approved the screenplay in September 2013, and filming finally began in April 2014.

13. At one point in the film, toddlers can be seen riding baby triceratops in the “Gentle Giants Petting Zoo”. This scene was actually included in the original movie with one of the children riding a baby trike. Special effects technicians worked on the effect for a year, but the scene was finally canned after Spielberg felt it ruined the pacing of the movie.

15. The velociraptors of Owen’s pack all bear names from the first few letters of the NATO phonetic alphabet used by the military: Charlie (C), Delta (D), and Echo (E), with the notable exception of Blue (B), normally Bravo. The letters probably indicate their place in the pack’s pecking order. The Alpha (A), or dominant member of the pack, is Owen himself. 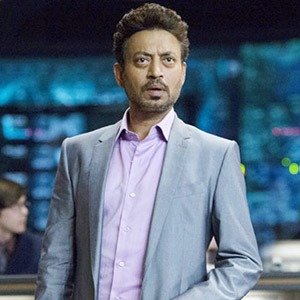 16. ‘Irrfan Khan’ said in an interview that he didn’t have money to buy a ticket for Steven Spielberg’s Jurassic Park (1993).

17. In the original Jurassic Park, in the mining scene, it is mentioned that Hammond is spending time with his daughter (Timmy and Lex’s mom) because she is going through a divorce. This is further referenced in subtext when a half-traumatized Lex repeats the phrase “He left us!”. In Jurassic World, Gray mentions to Zach that their parents are going to get a divorce. Thus, containing another element of the first movie. The theme of broken families and absent fathers is a trademark of “Jurassic Park” director Steven Spielberg.

18. The set was at the NASA Michoud assembly facility in New Orleans, Louisiana. Jurassic World (2015) was the latest in a bunch of Hollywood productions shooting in New Orleans due to tax incentives. The production rented out the huge buildings at the NASA facility which use to be used to construct the external fuel tanks for the space shuttles.

19. Bryce Dallas Howard’s character gives no regard for the holographic dinosaurs in the visitor center. She simply walks right through them, completely unimpressed. This symbolizes her view of the dinosaurs as nothing more than data, rather than living, breathing animals.

20. Empire magazine’s resident Jurassic Guru Nick de Semlyen can be seen playing the role of Edmund in the top left corner of the frame as the Mosasaurus splashes park guests. 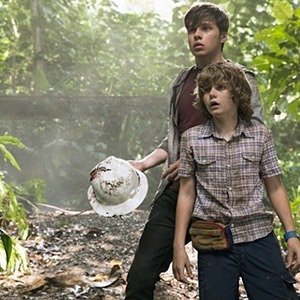 23. Jurassic World was originally going to be about Human-Raptor hybrid soldiers.

24. The lever-action rifle that Chris Pratt uses in the film is a Marlin model 1895SBL in .45-70 caliber. Although this rifle in this caliber is capable of taking down any animal in North America, it is apparently ineffective on Indominus Rex.

25. While Velicoraptor in this franchise is infamously and inaccurately much bigger than the actual turkey-sized (and feathered) real Velicoraptor was, the Mosasaur/Tylosaurus marine reptile also was given a considerable size increase for the film. The filmmakers report the Tylosaurus measures just over 72 feet long which the largest of this type of marine reptile was in reality around 40 feet in length, around the same length as a Tyrannosaurus rex. This was probably to make it more feasible when the Tylosaurus overtakes and preys on Indomimus rex at the finale of the film.

25 Kickass and Interesting Facts About Interstellar