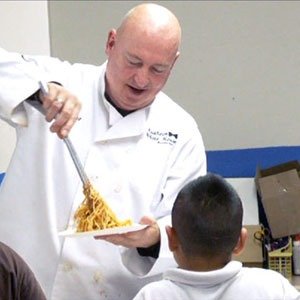 1. A chef named Bruno Serato in Anaheim, California serves free pasta meals to “motel kids,” whose families cannot afford permanent homes. The chef was inspired by his Italian mother who saw a child eating potato chips for dinner and told him in Italian, “You must feed them the pasta!” He has served over 270,000 meals. – Source

2. Football player Mardy Gilyard was kicked out of the University of Cincinnati and owed the school $10,000. He then worked 4 jobs simultaneously and slept in his car just to get back into school, eventually becoming the leading wide receiver in UC history. – Source

3. Actor David Spade did not attend his close friend Chris Farley’s funeral because he “could not be in a room where Chris was in a box.” – Source

4. In 1976, actress Margaret Hamilton reprised her role as the Wicked Witch of the West on an episode of Sesame Street. Initial screenings revealed that children were “exceptionally attentive” during scenes with the witch. The episode has never been re-run, and no known copies of the episode exist today. – Source

5. In the 1896 U.S. presidential election, William McKinley won despite the fact that he campaigned from the front porch of his home in Ohio while his opponent travelled extensively by railway speaking at over 600 events. – Source 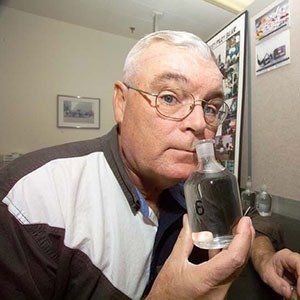 6. George Aldrich has worked for NASA for over 40 years, and his job is to smell things. This is to ensure that there are no unpleasant smells on the International Space Station and the shuttle. NASA calibrates and certifies its sniffers’ noses every four months using a “10-bottle test” in which seven of the bottles have odors and three of them are blanks. The seven scents must be categorized as musky, floral, ethereal, camphoraceous, minty, pungent or putrid. – Source

7. Despite smoking in some of his films, Eastwood is a lifelong non-smoker, has been conscious of his health and fitness since he was a teenager, and practices healthful eating and daily meditation. – Source

8. The Minnesota Vikings are the only NFL team to have an actual human as their mascot. His name is Ragnar. – Source

9. Since 1995, 7-Eleven has provided more than 6 million coupons to police departments across the country to “ticket” young people who are “caught in random acts of kindness” dubbed Operation Chill. – Source

10. Three men were arrested for attempting to steal Elvis Presley’s remains for ransom. This is why his body, along with his mother’s, was moved to Graceland where they are monitored by security. – Source 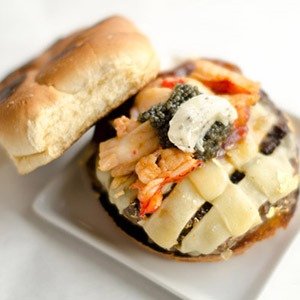 11. There is a food truck in New York that sells a $666 burger called the Douche Burger. They wanted to make “a burger and pile all the rich people stuff on it and it would be the douchiest thing in the world.” – Source

12. Professor Geoff Raisman spent 60 years of his life trying to find a cure for paralysis. He was fired twice, but 9 months ago he helped paralyzed Darek Fidyka walk again and believes his team’s work, and this breakthrough, will help many paralyzed people walk again in the near future. – Source

13. SR-71 pilots sometimes came from bomber aircraft because nobody else had experience in long supersonic flights. A crew taken from a B-58 Hustler ended up setting a world record for the longest supersonic flight after flying the SR-71 for over 10 hours over 15,000 miles, nonstop. – Source

15. In the late 980’s, Vladimir the Great chose to Christianize Russia rather than Islamisize it partly due to Islam’s ban on alcohol, saying, “Drinking is the joy of the Rus’, we can’t go without it.” – Source 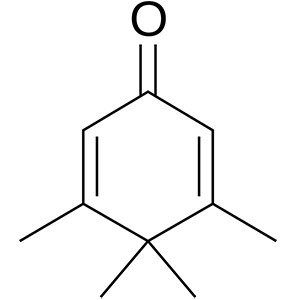 16. Penguinone, an organic chemical compound, got its name from the fact that its molecular structure resembles a penguin. – Source

18. A man named Cameron Todd Willingham was wrongfully executed after being convicted of murdering his 3 children. A prosecutor cited his tattoo of a serpent and his Led Zeppelin poster to prove he was a sociopath. – Source

19. When James Bond actor, Daniel Craig, first ran off with current wife, Rachel Weisz, he had a fiancée that ran up a million dollars on his credit as revenge when she found out. – Source

20. Actor George Carlin was court-martialed three times in less than three years during his service in the Air Force, once for smoking a joint in the crawlspace of a B-47. – Source 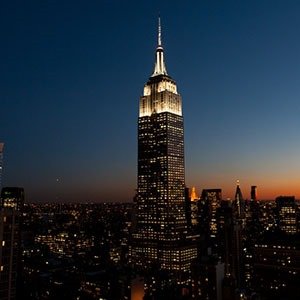 21. After the Empire State Building opened in New York City in 1931, much of its office space went unrented. It was nicknamed the “Empty State Building” by New Yorkers and didn’t become profitable until 1950. – Source

22. John F. Kennedy’s grandmother not only outlived him, but was never told about her grandson’s assassination. – Source

23. In 1999, BMX legend Mat Hoffman flew to Canada to have his ACL replaced. He chose to do so without any anesthesia and even helped the doctor steady the drill as it went through the bone. He was walking and back on his bike six days later. – Source

24. In 2009, a student in Ukraine died from a piece of bubble gum exploding in his mouth. He accidentally dipped the gum into a packet of explosive material, instead of citric acid. – Source

25. In 2013, 61-year-old old U.S. Navy vet Michael Boatwright was found unconscious in a motel room. When he woke up he only spoke Swedish instead of his native language English. He also insisted that he was a swede named Johan Ek and threw up when he saw his own reflection, in a state of confusion. – Source