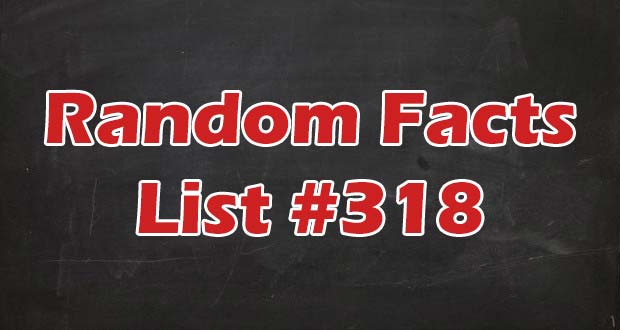 1. In 1943, a Mexican farmer named Dionisio Pulido had a volcano start to form in his corn field. By the early 50s it was over 400 meters tall. Before being evacuated and leaving his home for the last time, he left a sign that read “This volcano is owned and operated by Dionisio Pulido.” – Source

3. A woman fell asleep on a United flight and once the plane landed, the flight crew left her in the plane and locked her for 4 hours. A maintenance crew discovered her and had her detained and questioned. – Source

5. “Begs the question” doesn’t mean ‘asks the question’, and instead is a logical fallacy that means ‘the conclusion lacks support’. – Source

6. In 1973, Sarah Rector at age 10 was known as “Richest Colored Girl in the world”. After being given a land grant that unknowingly produced 2,500 barrels of oil a day. Soon she received a daily revenue of $300 (approx. $2.6 million annually today) and marriage offers worldwide at age 12. – Source

8. In Paris in 1778 lightning rods were the height of fashion, being included in hats, umbrellas and the like. – Source

9. Producers feared Johnny Depp’s portrayal of Jack Sparrow would kill the Pirates of the Caribbean, with the head of Disney Studios exclaiming “Goddammit, Johnny Depp’s ruining the film!” – Source

10. Most birds can’t move their eyes, which are not spherical like in mammals. They are also tetrachomatic, meaning they have 4 retinal cones (primary colors) versus 3 in humans, allowing most birds to see the UV spectrum and distinguish between colors that appear identical to humans. – Source

11. A few weeks after the Korean War ended, a North Korean pilot defected with a MiG-15 to South Korea and was paid $100k as a reward for being the first pilot to defect with an operational aircraft. – Source

12. Claw machines have variable PSI strength settings for the claws. They are designed to only allow you to pick up a toy as often as state regulations require. – Source

13. Katinka Hosszu is a Hungarian swimmer who failed to medal at her first two Olympics, got fourth in her third Olympics, and finally at her fourth Olympics won three gold medals. – Source

14. Electricity was installed in the White House in 1891 during the presidency of Benjamin Harrison. He was so afraid of being electrocuted that he and his family never operated the light switches, always making his servants do it for them. He often slept with the lights on. – Source

15. “A sentence must not end in a preposition.” is one of many misconceptions about the English language that even native speakers can’t get rid of. – Source

April 12, 2017
Latest Posts
Subscribe to Blog via Email
Did you know?
Loading...
Facts of the Day
Registration is disabled.