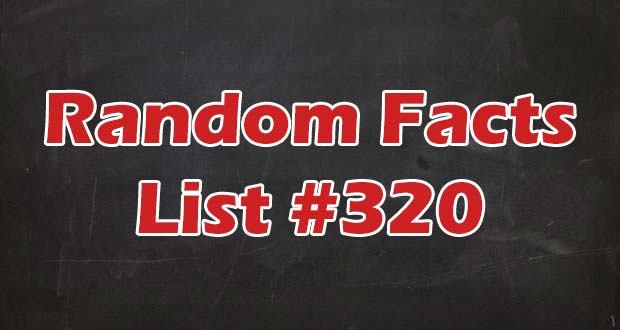 1. While filming Monty Python and the Holy Grail, the live rabbit they used for the “monster” scenes was covered in what they assumed was a washable red dye. But when they had trouble cleaning it off, they had to stop filming to desperately clean the rabbit before its owner arrived. – Source

2. In Indian elections, no voter is expected to travel more than 2km to a polling station. This sees an entire team setting up a full station for a single voter in the Gir forest. – Source

3. John Quincy Adams, the 6th US President, took the presidential oath of office not after placing his hand on a Bible but upon a book of law. – Source

5. During WW1 the Ottoman government murdered over 1,500,000 Armenians living in their empire. The event coined the word “Genocide”. The Armenian Genocide is the second most-studied case of genocide after the Holocaust. – Source

6. A Korean film called Silenced is depicting events which took place at a deaf school, where students were systematically abused for years. The film sparked a public outcry and re-investigation. Several teachers and the principal faced prosecution, eventually causing the school to be closed. – Source

7. Left turns make up less than 10% of all UPS truck turns. This policy was put into place in 2004 and has saved UPS 10 million gallons of fuel. – Source

8. Jazz legend George Melly once asked Mick Jagger why his face was so wrinkled. Jagger told him they were “laughter lines”. Melly replied, “Nothing’s that funny.” – Source

9. Author Roald Dahl’s last words would have been “It’s just that I will miss you all so much”, but after a morphine injection, his last words were “Ow, f*ck.” – Source

10. One nonprofit has gotten over 8,000 communities to end Female Genital Mutilation in West Africa. – Source

11. Fascist dictator Francisco Franco brought back the Spanish Monarchy, but the King of Spain instituted a democracy instead as soon as he came into power. – Source

12. The HMS Black Joke was previously a Brazilian slave ship called the Henriquetta. It was captured by the Royal Navy and re purposed to chase down slave ships, ultimately freeing hundreds of slaves during her five-year career. – Source

13. Elon Musk stated in an interview that he “wants to die on Mars, just not on impact.” – Source

14. Head injuries were so common on Penny-farthing bicycles that riders would put their feet over the handlebar when going downhill so that they would be thrown off feet-first instead of head-first. – Source

15. During a battle in 1797, British Admiral Horatio Nelson was badly wounded in the right arm. When he came to the surgeon he said, “the sooner it is off the better,” within a half hour of the amputation he returned to command of his forces. – Source

April 26, 2017
Latest Posts
Subscribe to Blog via Email
Did you know?
Loading...
Facts of the Day
Registration is disabled.