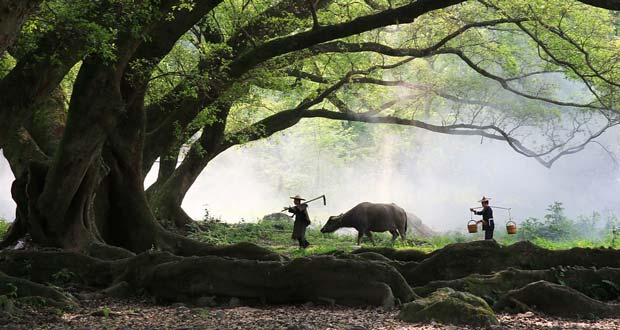 16. Statistically, a mature tree will only produce one adult descendent throughout its lifetime. – Source

17. When Blackbeard captured the ship that would become Queen Anne’s Revenge, there 455 African slaves on board. Many of the African slaves would go on to become pirates rather than continue to be slaves. At the time of Blackbeard’s death, nearly one-third of his total crew were former slaves. – Source

18. In 1995, the Chinese government kidnapped a 6-year old Tibetan boy called the Panchen Lama and replaced him with a Han Chinese “fake Panchen”. The Panchen Lama is in charge of choosing the next Dalai Lama, and the real Panchen Lama has never been heard from since. – Source

19. George Washington had a massive chain strung across the Hudson River in order to keep to British from sailing upriver. Each link weighed 100+ pounds. – Source

20. Scrappy-Doo, widely considered to be one of the most hated characters in fiction, has not appeared in an animated Scooby-Doo production since 1988 due to audience backlash. – Source

21. A “get out of jail free card” was a real thing in 1567 England; a lottery to raise money for the Navy promised winners “freedom from arrest” for all but the most serious crimes. – Source

22. We produce a lot of salivae just before vomiting in order to protect our teeth from erosion due to the acidity of vomit. – Source

23. A convenience store employee and his father stole a 5million dollar lottery ticket, told the winner it was only worth $5,000, only paid him $4,000 and then pushed him out the door and locked it. – Source

24. Ed Sheeran bought a ticket to LA with no contacts other than one poetry night. He played open mic nights all over the city before he was spotted by Jamie Foxx, who was so impressed that he offered Sheeran the use of his recording studio and a bed in his Hollywood home for six weeks. – Source