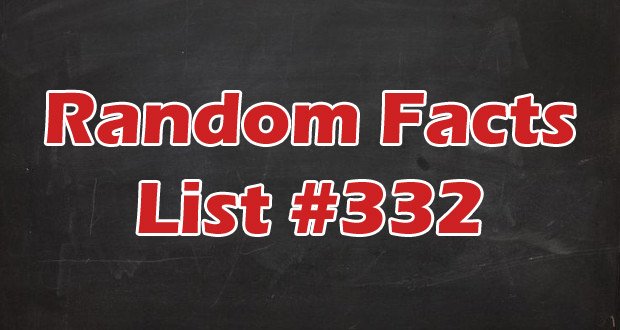 1. The town of Dull in Scotland has been twinned with the town of Boring, Oregon since 2012. In 2013 the town of Bland, Australia joined them in what has become known as the ‘Trinity of Tedium’. – Source

2. Adding a type of seaweed to the diet of cow reduces their methane production by 70%. – Source

3. Braveheart has been described as one of the most historically inaccurate modern films. One historian took particular exception to the costumes and compared it to, “a film about Colonial America showing the colonial men wearing 20th-century business suits, but with the jackets worn back-to-front”. – Source

4. One of the two daggers buried with King Tutankhamen was made out of a meteorite. – Source

5. You only need 40 digits of pi to calculate the circumference of the observable universe to a margin of error of 1 hydrogen atom. – Source

6. When his heir died childlessly, the estate of British scientist James Smithson passed to the U.S. government. American diplomat Richard Rush was sent to England to collect the money and returned with today’s equivalent of $11M in gold coins, which was used to found the Smithsonian Institution. – Source

7. The Defense Department spent an estimated $100 million for airline tickets that were not used over a six-year period and failed to seek refunds even though the tickets were reimbursable. – Source

8. When Henry Ford explained his idea of a gasoline powered car to Thomas Edison, Edison encouraged Ford that he “had it”. Ford claimed later that “No man up to then had given me any encouragement”. – Source

9. In 2012, Jose Alvarenga, a Salvadorian fisherman, survived 438 days on a raft in the Pacific Ocean. With no motor or GPS or food, he survived on raw turtle and fish, rain water, turtle blood, and his own urine. He is believed to be the longest surviving castaway. – Source

10. In Deep Blue’s first game against Garry Kasparov, the computer made a move that puzzled the Grandmaster so much, it made him believe the machine had superior intelligence. It threw Garry off his game, and ultimately cost him the match. The move was the result of a bug in Deep Blue’s code. – Source

11. Philip II (father of Alexander the Great) threatened Sparta with “If I bring my army into your land, I will destroy your farms, slay your people, and raze your city.” The Spartans simply replied with “if.” Neither Philip or Alexander attempted to capture the city. – Source

12. Rosie O’Donnell hated the movie ‘Fight Club’ so much, she spoiled the ending on her talk show and urged viewers not to see it. – Source

14. Toyota’s Tundra pickup is made of 70% Domestic parts, which ties the Ford F-150 for “Most American truck.” RAM trucks came in 3rd at 61% domestic parts. Chevy and GMC trucks came in last behind Nissan with less than half of their parts made in America. – Source

15. Cate Blanchett’s Academy Award for playing Katherine Hepburn in “The Aviator” made her the only actor to win an Oscar for portraying another Oscar-winning actor. – Source

July 18, 2017
Latest Posts
Did you know?
Loading...
Facts of the Day
Registration is disabled.