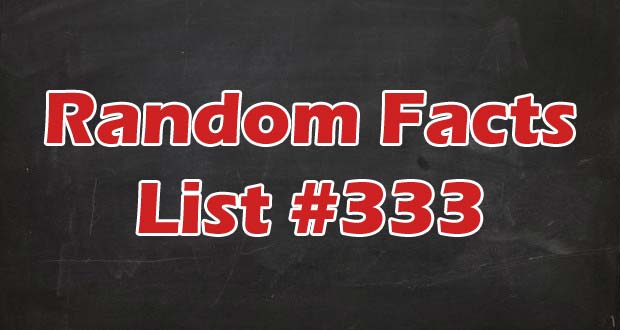 1. Actor Martin Sheen has been arrested a total of 66 times for protesting and acts of civil disobedience most recently in 2007 for trespassing at a Nevada nuclear test facility. – Source

2. The reason hurricanes and cyclones have human names is that the original meteorologist to name them, Clement Wragge, began naming them after politicians he didn’t like. This lets him say they were ‘causing great distress’ or ‘wandering aimlessly’. – Source

3. The FBI started compiling a file on Sacha Baron Cohen while he was filming ‘Borat’ after receiving numerous complaints about a strange man traveling around the country in an ice cream truck. – Source

4. When Kiefer Sutherland found out about a “24” drinking game where you drink every time he says “damn it,” he decided to play along and started saying the phrase as many times as he could in an episode. – Source

5. James Doohan (Scotty on ‘Star Trek’) received an honorary doctorate from the Milwaukee School of Engineering. The university gave him the degree after half of its students said in a survey that his character had inspired them to choose engineering as a career. – Source

6. Thioacetone is a chemical so stinky that a small amount (test tube amount) causes nausea a half mile away. A smell so bad it was described as “Fearful”. – Source

7. In 1990, First Lady Barbara Bush criticized The Simpsons as “the dumbest thing I’ve ever seen.” Marge wrote a letter to her, in character, politely telling her not to be so judgmental and explaining that her family tried their best. Mrs. Bush later apologized for her “loose tongue”. – Source

8. One of the reasons the gloves didn’t fit O.J. Simpson is that he stopped taking medication for his arthritis which led to his hands becoming swollen. – Source

9. The “6” in SEAL Team 6 was added to throw off the Russians during the Cold War. They wanted Russian intelligence to think five more teams of equal caliber were deployed. – Source

10. R.L. Stine, author of Goosebumps, never included things like divorce, drug use, and abuse because he didn’t “really want to terrify kids.” He wanted his stories to be strictly fantasy and kids to know that it couldn’t really happen. – Source

11. In responding to why he starred in Jaws: The Revenge, Michael Caine said “I have never seen the film, but by all accounts it was terrible. However, I have seen the house that it built, and it is terrific.” – Source

13. The voice of Boo from Monsters, Inc., Mary Gibbs, was just a toddler during production. The crew couldn’t get her to sit still and read her lines, so they had her play in the studio while following her around with a mic. – Source

14. There is a Star Wars comic called Into the Great Unknown in which Han Solo and Chewbacca crash into Earth after using Hyperspace blindly. Native Americans kill Han, and his body is discovered by Indiana Jones 126 years later while searching for Sasquatch which turns out to be Chewbacca. – Source

15. The US allows US chickens to be shipped to China for processing and then shipped back to the US without notifying consumers the chicken came from China. – Source

25 Kickass and Scariest Places on Earth

July 26, 2017
Latest Posts
Subscribe to Blog via Email
Did you know?
Loading...
Facts of the Day
Registration is disabled.