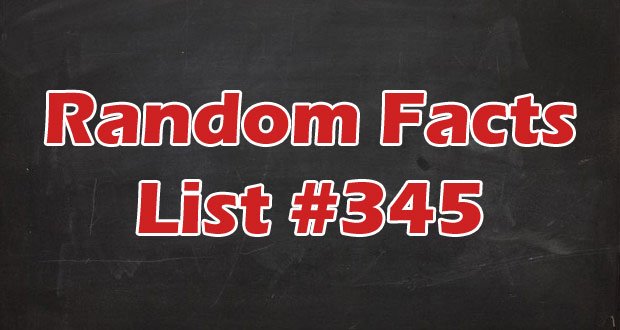 1. Eminem set the Guinness World Record with “Rap God” for most words in a hit single. The song has a record-breaking 1560 words in 6 minutes 4 seconds and averaging 4.28 words per second. One section of the song features 97 words in 15 seconds at 6.5 words per second. – Source

2. In WWI, the Germans disguised one of their ships as the British ship, the RMS Carmania and sent the disguised ship to ambush the British ones. Unluckily, the first ship it encountered was the real RMS Carmania, which promptly sank them. – Source

3. Eminem watched his daughter, Hailie, get crowned homecoming queen from an empty classroom in the school because he didn’t want to take the attention away from her. – Source

4. English is the universal “language of the skies”. All pilots must learn and speak English, regardless of their origin. – Source

5. The Retail Credit Company’s public image took such a beating after a series of congressional testimonies that they changed their name. Today, they are known as Equifax. – Source

6. The first Roman fire brigade was created to be very lucrative. Arriving at the scene the firefighters did nothing while a price was negotiated. Failing to reach a deal, the structure was allowed to burn to the ground after which an offer was made to purchase it for a fraction of its value. – Source

7. In 1926, Poland sent the US a birthday card with over 5 million signatures. Polish citizen Leopold Kotnowski visited the White House to present the card for America’s 150th birthday. It has 30,000 pages full of art, photos, poems and pressed flowers. – Source

8. In the US, peanut butter must contain 90% peanuts, otherwise, it must be called “peanut spread”. – Source

11.  The secret police in Communist Romania subjected the leaders of a 1977 coal miners’ strike to 5-minute chest X-rays to ensure that they developed cancer. – Source

12. When the band plays “Jump Around” at University of Wisconsin football games the fans jumping registers on the Geology Department’s seismograph 2 miles away. – Source

13. The residents of a neighborhood complaining of mysterious ailments from a new cell phone tower. During a meeting, the owner revealed that the tower had been off for over a month. Residents didn’t show up to the follow-up meeting. – Source

14. Cruise ships emissions can equal the equivalent of one million cars per day and air quality on deck can be worse than in the world’s most polluted cities. – Source

15. Ken Jeong would add little inside jokes into the Hangover movie to make his wife, who was battling breast cancer, laugh when she watched it. – Source

October 18, 2017
Latest Posts
Subscribe to Blog via Email
Did you know?
Loading...
Facts of the Day
Registration is disabled.