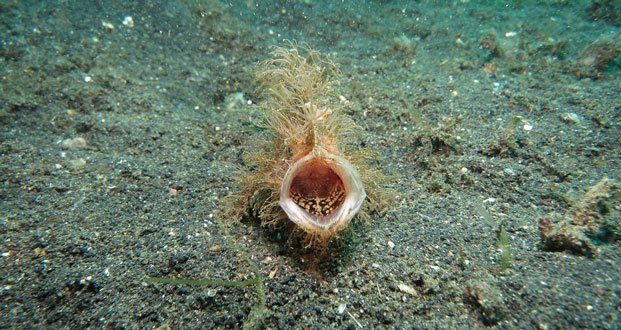 16. Only female Anglerfish have lures and actively look for food. The males are tiny and pale and spend their entire life finding and fusing to female Anglers, where they begin to degenerate until they are little more than a pair of gonads providing sperm to the female on her command. – Source

17. Clowns paint their faces onto eggs to copyright them so other clowns can’t use the same face. There is a registry of egg faces in both Europe and in the United States. – Source

18. The Carménère grape was considered extinct. That was until 1994 when an oenologist went to Chile and discovered that the Merlot he was tasting was, in fact, Carménère. Turns out the grape was accidentally planted and preserved when it was mistaken for Merlot. – Source

19. Cup Noodles were invented after Momofuku Ando, the inventor of instant ramen, watched as American supermarket executives broke up his ramen to fit into styrofoam coffee cups, added boiling water & then proceeded to eat the ramen with forks. – Source

20. Bette Graham became a typist to support herself and her son Michael in 1951. She was a poor typist and invented a white tempera paint to cover her mistakes. This led to her business Liquid Paper Co. which she sold 25 years later for $48 million. Michael went on to become a member of The Monkees. – Source

21. During Prohibition, Pabst Brewing Company stopped making beer and switched to cheese production, selling more than 8 million pounds of Pabst-ett Cheese. When Prohibition ended, the company went back to selling beer, and the cheese line was sold to Kraft. – Source

22. NASA engineers had issues with the honeycomb insulation of the Saturn V rocket, so they ended up hiring local surfers, who had experience in working with the material, to apply it to the rocket. – Source

23. “The Simpsons” co-creator Sam Simon left most of his fortune to animal charities and feeding the hungry when he passed away from cancer in 2015. – Source

24. Matches weren’t invented until 1826. As John Walker stirred a pot of chemicals, a lump formed on the end of the mixing stick. He tried scraping the dried chemicals off, igniting the stick and accidentally inventing matches. – Source

25. In 2004, a flawless diamond worth $300,000 was attached to the nose cone of each Jaguar Formula One car in order to promote the film Ocean’s 12. On the first lap of the Monaco Grand Prix, one of the drivers crashed into a barrier, and the diamond was lost. – Source

25 Uplifting Headlines of the Week - Part 83