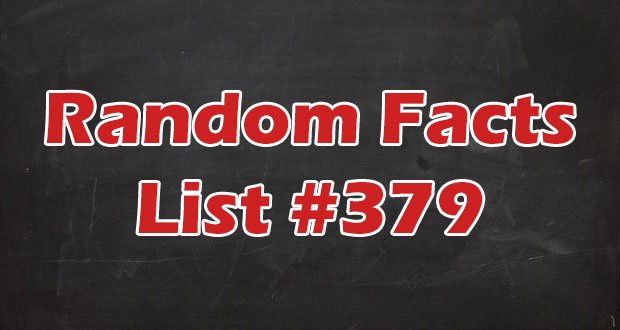 1. Guns and Roses guitarist Slash did not allow the TV show Glee to use any of Guns and Roses’ music despite many attempts from producers. He stated, “Glee is worse than Grease and Grease is bad enough.” – Source

4. Opossums are great at reducing the tick population in a given area. Scientists estimate that a single opossum can kill about 5,000 ticks in a single season. – Source

5. Maple syrup was promoted in the 1800s as a slavery-free alternative to cane sugar: “Suffer not your cup to be sweetened by the blood of slaves.” – Source

6. Dr. Denis Mukwege is a Congolese gynecologist who specialized in women victims of extreme sexual violence. Threatened, he exiled with his family, but the Congolese women joined forces for him to come back. He now works in Bukavu where he is under constant protection from the UN. – Source

7. Walking through a doorway can cause memory lapses. That is why sometimes when we walk into another room, we often forget why we even came here. – Source

8. Japanese football fans always clean up their stadium after their World Cup Finals games, a tradition stemming back to the 1998 World Cup. – Source

9. Anthony Bourdain at times wouldn’t name the places he’d visit while filming. He did this sometimes to prevent tourists from turning a bar or restaurant into a tourist trap after filming there. – Source

10. Gaslighting is the act of deliberately driving someone crazy by altering the environment and denying their sense of reality. – Source

11. When the British burned the White House in 1812, they did not burn the Marine Barracks or the Commandant’s House out of respect for the honorable conduct of the Marines at the Battle of Bladensburg. – Source

12. After leaving office, former President Harry S. Truman oftentimes struggled to make ends meet. Despite only having an Army pension of $112/month as a steady source of income, Truman refused to “commercialize on the prestige and dignity of the office of the presidency.” – Source

13. During the Vietnam War, the U.S. carried out Operation Popeye, a “cloud-seeding” mission to stimulate clouds in Vietnam to increase rainfall and lengthen the monsoon season. After the operation was declassified in 1974, the United Nations banned the weaponization of weather. – Source

15. Red Bull was sued for “false advertising” by a consumer after 10 years of drinking Red Bull that he neither grew wings nor any enhanced athletic or intellectual performance. – Source

June 17, 2018
Latest Posts
Subscribe to Blog via Email
Did you know?
Loading...
Facts of the Day
Registration is disabled.