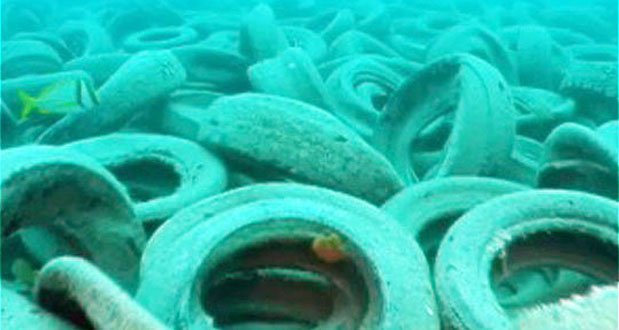 16. In the 70s, the U.S. government tried to create an artificial reef using concrete jacks and old tires. The reef ended up becoming an ecological disaster as it eroded, causing loose tires to be picked up by hurricanes and collide with natural reefs elsewhere. – Source

18. Cardiac surgeon Michael DeBakey developed MASH hospitals and many new surgical techniques, including the first treatment for aortic dissection. In 2005, he suffered an aortic dissection and his life was saved by the surgery he invented. – Source

19. Polydactyly (having many fingers) in cats was seen by sailors as advantageous for catching mice aboard ships. Consequently, there is a high proportion of these cats in seaport areas such as Boston, Nova Scotia, and Great Britain. – Source

20. The French have been building a castle for 20 years using medieval techniques and building material, anyone can participate in the project, which will be completed in 2023. – Source

21. The University of Paris existed for 820 years from 1150 AD to 1970, when it was broken up for being the main source of student revolutionaries who nearly overthrew the French government in May 1968. – Source

22. Isaac Newton set out the colors of the rainbow we memorize today. However, he originally didn’t include orange or indigo. He only added them later because of his occult belief that there must be 7 separate colors, just like there are 7 notes in a musical scale and 7 days of the week. – Source

23. The town of Greensburg, Kansas was almost completely destroyed by an F5 tornado in 2007. The city used the opportunity to rebuild as one of the greenest cities in the world. – Source

24. In 1973, the CEO of GM dismissed Honda’s CVCC technology as only good for “little toy motorcycle engines.” Soichiro Honda then bought a Chevy Impala with a 5.7L V8 and had engineers build a CVCC system for it. Flown back to the U.S., it passed EPA tests without a catalytic converter. – Source

25. Approximately 90% of all gunpowder used by the Patriots during the American Revolution was supplied by France. – Source