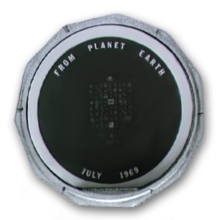 16. When the Apollo 11 astronauts landed on the moon in 1969, they left behind a white pouch containing a silicon disc slightly bigger than a silver dollar. Inscribed in microscopic font on the disc are 73 messages, each from a different country, expressing wishes of goodwill and peace. – Source

17. The creator of Attack on Titan was inspired to create the Titans after seeing a drunk customer at a cafe. He was inspired by the lack of the ability to communicate even though the person was of the same species. He decided the most familiar and scary animal in the world is actually the human. – Source

18. When Jeff Hilger first started marketing the Koala Bear Kare Baby Changing Station in the 80’s most businesses saw no need for it. It wasn’t until after he started passing out fliers of a woman changing her baby’s diaper on a dirty bathroom floor that his idea became a huge success. – Source

19. Naoto Matsumura, the “guardian of Fukushima’s animals” is the only human brave enough to live in Fukushima’s radioactive exclusion zone and cares for all the animals left behind. He refuses to worry that radiation levels will kill him, saying “I’ll probably be dead by then anyway.” – Source

20. Reginald Dwayne Betts spent 8 years in prison as a result of a carjacking when he was 16 after getting out of prison he became one of the rarely convicted felons to get a law degree from Yale and passed the Connecticut bar exam in September 2017. – Source

21. Elton John’s 1970 breakout hit “Your Song” was written by Elton and originally recorded by the band Three Dog Night, but they did not release it as a single as they wanted to let John, then an upcoming artist, have a go with it. – Source

22. There is a gold fire hydrant in San Francisco that is said to have been the only functioning hydrant and is credited with saving the historic Mission District neighborhood during the 1906 quake. It is Painted with a fresh coat of gold paint each April 18. – Source

23. Guinness Book of Records holds the record for being the book most often stolen from Public Libraries. – Source

24. There is a bridge built especially for squirrels to be able to cross a busy motorway in the Netherlands which cost €150,000 to construct had been used 5 times in the first 2 years since its construction. – Source

25. The University of Georgia was caught having a 300-level Coaching Principles and Strategies of Basketball class, attended mainly by its basketball team, where the final exam had questions like “How many points does a 3-point field goal account for in a basketball game?” – Source