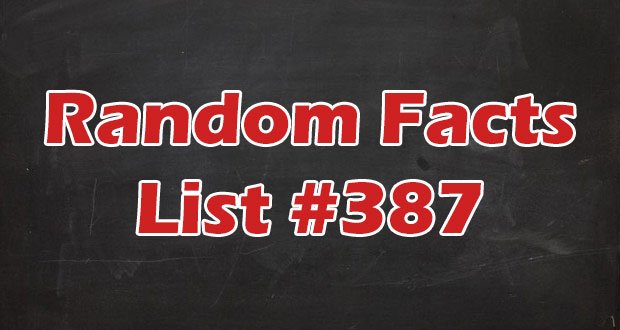 1. Some Jewish males celebrate a second Bar Mitzvah at age 83, under the logic that the Torah states a normal lifespan is 70 years, thus an 83-year-old can be considered 13 in a second lifetime. This practice is becoming more common as people live longer, healthier lives. – Source

2. To fight illegal logging of their land, an indigenous community of 9000 members in Guyana built a drone by watching DIY videos on YouTube, to film the illegal activities and report the footage to Guyanese authorities. – Source

3. Stephen King threw away the first few pages of Carrie until his wife fished it out of the trash can and said she liked it and would help him with the female perspective. The book would become his first published novel and wildly successful, launching his $400 million careers. – Source

4. Kevin Smith actually worked at the convenience store in Clerks. He worked all day, and they filmed all night (thus the closed shutters) for 21 straight days. He slept one hour a day during filming. The whole production cost $27k, funded by maxing out credit cards and selling his comic books. – Source

5. American wine had a terrible reputation until an event in 1976, called the Judgment of Paris. Wine industry luminaries blind tasted California and renowned French wines, side by side, and scored them. Surprisingly, the winning red and white wines were both from California. – Source

6. The chemical Thioacetone is the world’s smelliest substance. It’s so bad that, after a lab technician dropped a vial of it, it induced instant vomiting from people in buildings almost 1/2 mile away. – Source

7. Notre Dame students once stormed a KKK parade in Indiana, ripping robes and hoods off the Klansmen and driving them out of the area, ruining the rally. – Source

8. Little Merrit, an 8-year-old boy died in 1865. A few days before he died, he told his dad he was afraid to be buried in a dark tomb. His parents honored his wish and put a window in his tomb. – Source

9. The most rural post office in the U.S., the Supai Post Office is at the bottom of the Grand Canyon and is serviced by a mule train that takes 2.5 hours to reach it. It services the Havasupai reservation and demonstrates the obligation of the U.S. Postal System to service every community. – Source

10. After a decompression accident killed four people in 1983, doctors discovered that decompression does not kill from pressure, but that fat in the bloodstream suddenly condenses in veins and immediately stops all blood flow. – Source

11. In Elizabethan England, the word “Nothing” was slang for female genitalia. The title of the Shakespeare play “Much Ado About Nothing” is a double entendre. – Source

12. Tom Hanks produced Mamma Mia with his wife, Rita Wilson. Hanks even auditioned to be one of the three main men but was denied because his singing voice wasn’t quite up to snuff. – Source

13. Margaret Dickson was hanged in 1724. She was later found still alive. Under Scots Law, since her punishment had been carried out, she could not be executed for the second time for the same crime. Only later were the words “until dead” added to the sentence of hanging. – Source

14. The Mars rover only hummed “Happy Birthday” to itself once, and doesn’t anymore. – Source

15. A study has shown that Male Robins Make the Best Bird Husbands as they possess the capability to guess what their wives want to eat, whether or not they saw what the females ate last, they can still get exactly what their partner wished for. They are also Monogamous. – Source

August 8, 2018
Latest Posts
Subscribe to Blog via Email
Did you know?
Loading...
Facts of the Day
Registration is disabled.