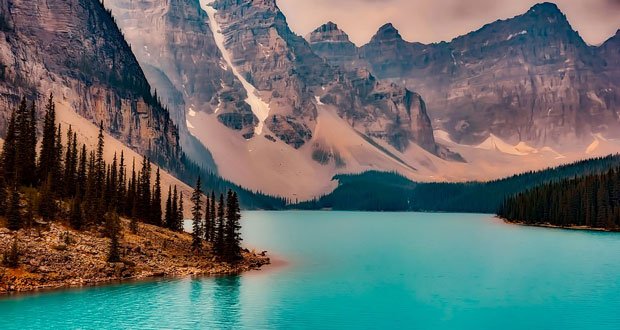 16. Canada holds 25% of the world’s freshwater, is surrounded by 3 oceans, and contains over 2 million lakes. – Source

17. Andy George spent $1,500 and 6 months making a single sandwich completely from scratch. He did absolutely everything from making his own cheese to harvesting his own wheat. He made his own salt and made his own oil. He grew sunflowers and collected their seeds to extract fat. – Source

18. Japanese train drivers and conductors to purposely point at all the signs they pass as a way to keep focus and prevent accidents. The technique is called Shisa Kanko and has been in use for more than 100 years. – Source

19. In 2017, Offspring’s Dexter Holland finished a Ph.D. program in molecular biology. Publishing a 175-page dissertation on the molecular dynamics of HIV and general virus/host interactions. – Source

20. According to a study on Academy Award speeches, Steven Spielberg has been thanked more than God. – Source

21. In 1981, a German landlord evicted a tenant after they spread surströmming brine, the world’s smelliest food, in the building’s stairwell. When the landlord was taken to court, the court ruled in favor of the landlord after they demonstrated their case by opening a can inside the courtroom. – Source

23. When Robin Thicke was 11, he was being babysat by Wayne Gretzky while his father was on vacation. During that time, Gretzky learned he had been traded from the Edmonton Oilers to the LA Kings and abruptly had to leave, leaving Robin Thicke home alone. – Source

24. During a London Cholera outbreak, workers at a local brewery near the outbreak were saved because they only drank beer, which protected them from the infected water. – Source

25. According to Taika Waititi, 80% of the dialogue in Thor: Ragnarok was improvised, in order to create a “very loose and collaborate mood” among the cast an attempt to replicate the tone and sensibility from his previous films. – Source