Here are 25 Interesting Facts About Dolphins. 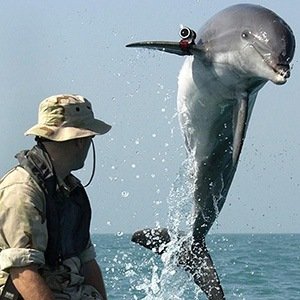 1. Thirty-six armed dolphins trained by the U.S. Navy to kill terrorists have been missing since 2005. The dolphins carry “toxic dart guns” capable of killing a man in a single shot. – Source

2. During late 1950’s, in an experiment to try and see if dolphins could learn human language, the experimenter gave the dolphin handjobs after it tried to aggressively woo and mate with her. They then gave the dolphin LSD as a last resort to see if that could get the dolphin to talk. – Source

3. Research has found that dolphins name themselves when they are young and keep the same name throughout their lives. Other dolphins recognize the name even if it’s not spoken by the dolphin whose name it is. – Source

4. The dolphin who played Flipper (1964) committed suicide by voluntarily ceasing to breathe. Dolphins are not “automatic breathers” and they can choose to stop. There are other cases of captive dolphins doing the same. – Source

5. Male dolphins are known to separate female dolphins from their families and deny them food until they agree to mate. – Source 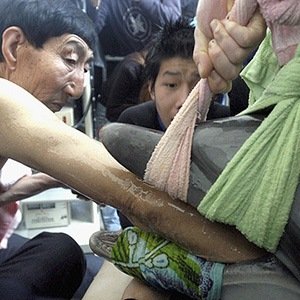 6. In 2006, the world’s tallest man, Bao Xishun, used his incredibly long arms (1.06m) to remove plastic from the stomachs of 2 dolphins, which ultimately saved their lives. He was called after trainers tried numerous other methods and failed. – Source

7. Dolphins can identify humans underwater by checking our skeletal structure through their sonar. They are known to often help shipwreck victims fight sharks and stay afloat, because as a mammal, they understand drowning. – Source

8. A dolphin named Pelorus Jack regularly used to guide ships in New Zealand through the treacherous waters of Cook Strait until his disappearance in 1912. He was even protected by Order in Council under the Sea Fisheries Act of 1904 after someone tried to shoot the dolphin with a rifle. . It is believed that Pelorus Jack was the first individual sea creature protected by law in any country. – Source

9. Dolphins can rapidly heal from extreme injuries, such as shark bites, and regenerate their original body shape. – Source

10. In 2013, scientists found that a lonely, deformed dolphin was adopted by a family of sperm whales. – Source 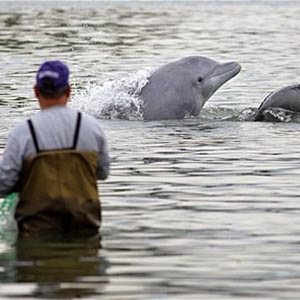 11. In Laguna, Brazil, bottlenose dolphins actively herd fish towards local fishermen and then signal with tail slaps for the fishermen to throw their nets. The dolphins feed on the escaping fish. The dolphins were not trained for this behavior and this collaboration between the dolphins and the fishermen has been going on since at least 1847. – Source

12. Scientists have proposed that we give Dolphins similar rights as Humans, given their brain structure and complex social systems. One ethics professor has even called them “non-human persons”. – Source

13. Dolphins only sleep one hemisphere of the brain at a time, so that they can breathe while resting. – Source

14. Dolphins are known to go on killing sprees when they sexually frustrated. – Source

15. There have been several recorded instances where whales play around and give rides to dolphins on their back. – Source 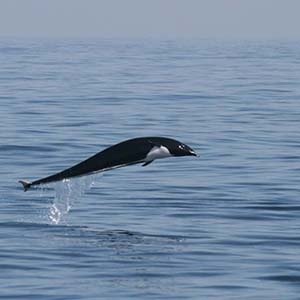 17. In 1991, an English man was prosecuted for allegedly having sexual contact with a dolphin. The man was found not guilty after it was revealed at trial that the dolphin was known to tow bathers through the water by hooking his large penis around them – Source

18. There is an organization called Anti-Dolphin Organization, whose members fear that dolphins are a threat to the human race and should be eliminated. – Source

19. India recognizes dolphins as non-human persons and is one of four countries to ban the import/export of cetaceans (whales; dolphins; porpoises; narwhals) for commercial entertainment – Source

20. A species of dolphin is born naturally blind in the Indus and Ganges rivers of South Asia. These dolphins have a highly sophisticated sonar system and swim on only one side of their body. – Source 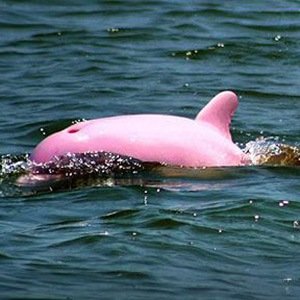 21. There is a pink albino dolphin in Lake Calcasieu, Louisiana USA – Source

22. Soviet Navy once deployed dolphins that were armed with syringes loaded with carbon dioxide. Those Soviet dolphins also were trained to attach mines onto ships and were sometimes parachuted out of choppers. – Source

23. The world’s smallest dolphin species is critically endangered. There are only approx. fifty-five left. – Source

24. In 2008, Moko, a bottle nose dolphin, approached and led a pair of distressed sperm whales through a narrow channel to the safety of the sea despite failed attempts by conservation workers. – Source

25. Killer Whales are not actually full whales; they are part of the dolphin sub-category and the largest of the group. The name comes from a Spanish mis-translation and should be “Whale Killer” – Source