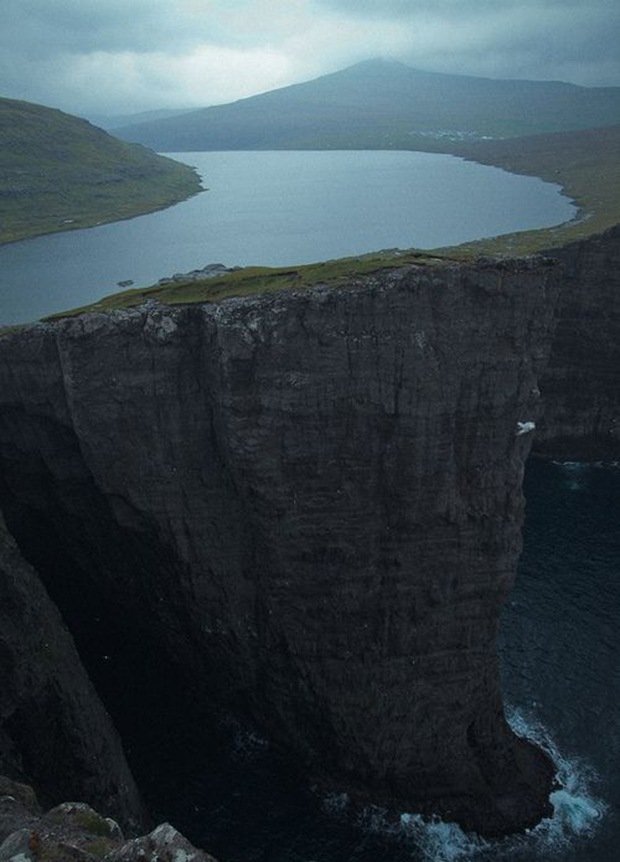 Sørvágsvatn (or Leitisvatn) is the biggest lake of the Faroe Islands, situated on the island of Vágar. It covers an area of 3.4 square km, more than three times the size of the second biggest lake Fjallavatn, which also lies on the island of Vágar. This picture you see is actually an optical illusion. It appears as if the lake is significantly higher than the ocean. In real, the lake is only 30 meter above the sea level, but the cliff facing the camera is 100 meters high. The position of the camera and the angle of the shot makes it seem like the lake is about the same level as the cliff. 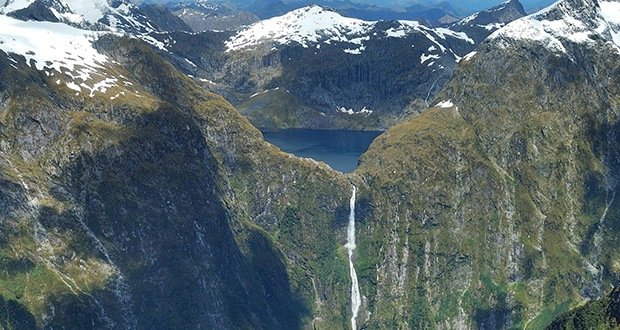 Sutherland Falls is a waterfall near Milford Sound in the Fiordland National Park, New Zealand. Amongst the tallest waterfalls in the world, it has a steep slope. Sutherland Falls are fed by a small circular lake, named Lake Quill, which occupies a small rock basin that was formed by ice-action during the Ice Age, and spills almost directly down a near-vertical mountain-wall into a valley. Its most beautiful angle is taken from above on a helicopter flight, when you can see the lake behind the waterfall framed with snow-capped mountains in the cold seasons. 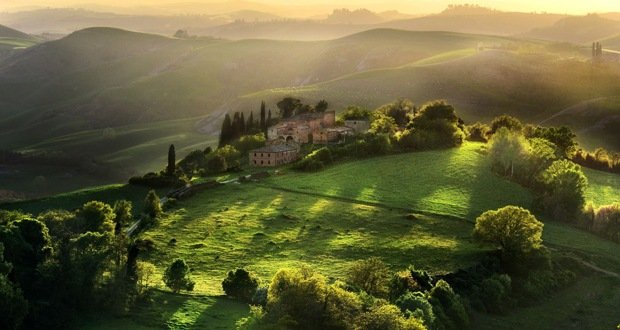 In the central Italy lies the beautiful region of Tuscany, a place that is home to cities such as Arezzo, Grosseto, Livorno, Lucca, Massa Carrara, Pisa, Pistoia, Prato, Siena, Chianti, Florence Casentino and its capital. The Tuscany region is crossed by mountain ranges, so there are few flat plains, but they are particularly fertile and extremely beautiful. 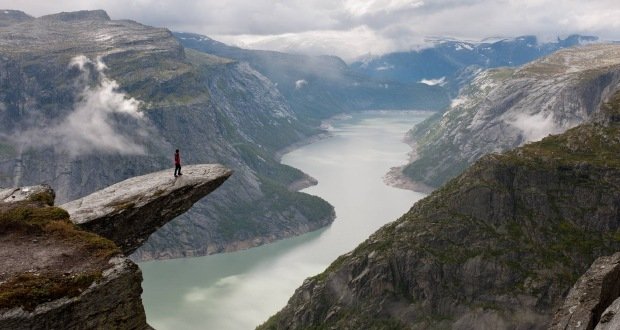 Trolltunga is one of the most spectactular scenic cliffs in Norway. Trolltunga is situated about 1100 meters above sea level, hovering 700 metres above lake Ringedalsvatnet in Skjeggedal. The view is breathtaking. The hike goes through high mountains, takes 8-10 hours in total (to Trolltunga and return) and the ascent is about 900 meters. 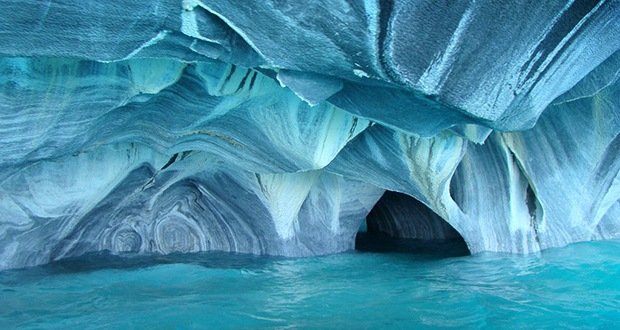 Marble Caves Chile Chico located on the border of Chile and Argentina is one of the most beautiful places of our planet. The primitive beauty of the marble rocks, combined with the crystal clear water of the Lago General Carrera mountain lake makes one believe, that heaven does exist, and it is somewhere in this place. Marble Caves are the most famous attraction of Patagonia (Chile). These caves attract a lot of tourists from the different corners of the globe. 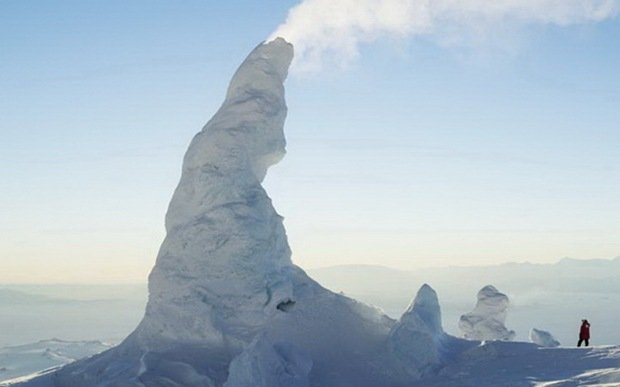 Hundreds of ice towers are located on Mount Erebus (height 3800 m above sea level) look like a one-day stubble on the face of the giant. A constantly active volcano, and probably the only place in Antarctica where fire and ice meet, interacting to and create something unique, encompassing both their natures. Towers can reach up to 20 meters in height and look almost alive as they produce jets of steam into the south polar sky. Part of the volcanic vapor freezes in the inner parts of the towers, increasing their breadth and height.

Located on the island of Staffa, Scotland, Fingal’s Cave, also known as “Uamh-Binn” in Gaelic (meaning “cave of melody”), is well-known for its arching, cathedral-like geological features and emanating eerie sounds. The cave, along with the entire island of Staffa, is composed entirely of hexagonal basalt columns, which produces the naturally arched ceiling. The easiest way to see this awe-inspiring cave for yourself is to take a sightseeing cruise from the town of Mull. The cruises land close to the cave, and the hexagonal basalt columns serve as perfect stepping stones to walk along the shore and enter the cave. 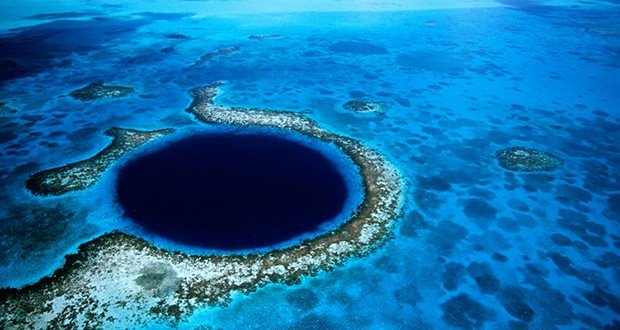 The Great Blue hole, located just 100 kilometers (60 miles) off the coast of Belize, is an underwater sinkhole that researchers believe is the largest of its kind. Circular in shape and characterized by its rich, blue color, it is over 300 meters (984 ft) across and 125 meters (410 ft) deep. It lies in the center of an atoll called Lighthouse Reef, where an island of coral encircles the shallow, light turquoise-colored waters of a lagoon. Water levels there are so shallow that parts of the ring surrounding the dark blue sinkhole are even known to crest the surface at low tide. 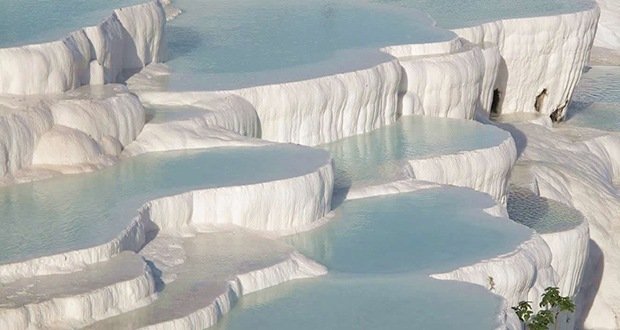 Pamukkale, 19 km (12 miles) north of Denizli (map), is Turkey’s foremost mineral-bath spa because of its natural beauty: hot calcium-laden waters spring from the earth and cascade over a cliff. As they cool they form dramatic travertines of hard, brilliantly white calcium that form pools. Pamukkale (“cotton fortress”) has been a spa since the Romans built the spa city of Hierapolis around a sacred warm-water spring. The Sacred Pool is still there, littered with marble columns from the Roman Temple of Apollo. You can swim in it for a fee. 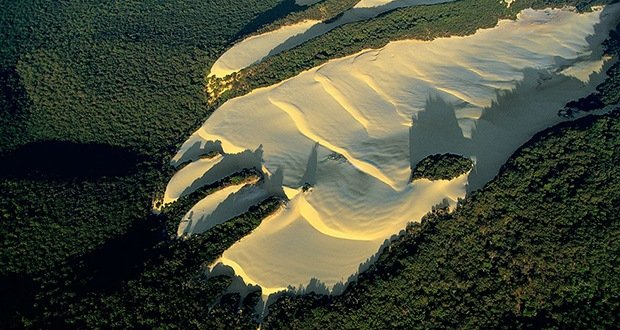 Fraser Island lies just off the east coast of Australia. At 122 km long, it is the largest sand island in the world. Majestic remnants of tall rainforest growing on sand and half the world’s perched freshwater dune lakes are found inland from the beach. The combination of shifting sand-dunes, tropical rainforests and lakes makes it an exceptional site.