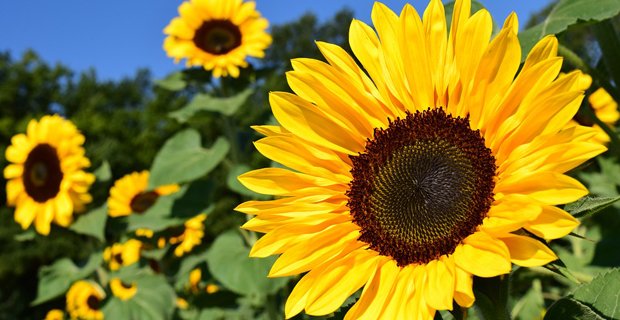 1. The petals of a sunflower are actually each single-petalled flowers; a sunflower is actually a cluster of hundreds of flowers. – Source

3. Vanilla flowers only open once for 2-3 hours and require hand pollination to produce a bean. – Source

5. Many rose cultivars never produce fruit (rose hips) because the flowers are too tightly petalled to allow pollination. The flowers are beautiful but “broken” in that they don’t serve the biological purpose of a flower. – Source

6. The Aalsmeer Flower Auction is the largest of its kind in the world. Around 20 million flowers are auctioned daily from the 10.6 million square foot warehouse in the Netherlands. – Source

8. When Darwin was studying a Madagascar orchid whose flower had a foot long nectar filled tube, he hypothesized it had an as yet unknown pollinating moth with a proboscis of the same length, a length unprecedented at the time. Not until 21 years after his death was the moth finally discovered. – Source

9. Lilies are toxic and potentially fatal for cats. – Source

10. It’s a faux pas in Russia to give your date a dozen flowers; You give an odd number of flowers for a happy occasion, and an even number for condolences. – Source

11. The oleander is the official flower of the city of Hiroshima because it was the first to bloom again after the explosion of the atomic bomb in 1945. – Source

13. There is a flower that literally looks like a set of hooker’s lips and it’s actually called “Hooker’s Lips.” – Source

14. Certain flowers only release pollen when a bee buzzes on them. – Source

15. Nintendo actually bred its own type of flower to market their series “Pikmin”. This flower the Chaenostoma cordatum also known as the bacopa cabana is also called the “Pikmin flower” for that reason. – Source

16. Ghost flower is a flowering plant with no chlorophyll. – Source

17. There is a plant called Ramonda Serbica, which miraculously comes to life when watered, even if it’s completely dried. That’s why it’s also called Serbian Phoenix Flower. – Source

19. There is a flower often used as a food dye in Southeast Asian cuisine called “Clitoria” – named because it resembles a woman’s sexual organs. – Source

20. The foxglove flower can cause your heart rate to drop by simply handling the plant. – Source