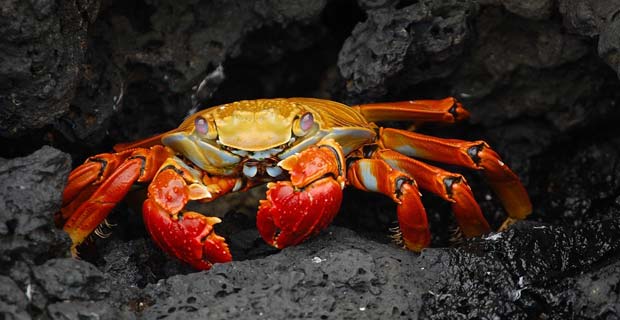 21. Crab traps can kill dozens of crabs when detached. As a result, crab traps in many jurisdictions are required to have a “rot-out panel”, which will disintegrate with a few weeks’ exposure to seawater, opening the trap and allowing any crabs inside to escape. – Source

22. You can buy live crabs in vending machines in China. – Source

23. Tiny crabs can live inside the gills of oysters. They use the oyster as protection and live on the food that the oyster gets for itself. These crabs are themselves considered an edible seafood delicacy. – Source

24. The reason some beaches will be covered in small sand balls is because it is the leftover sand after a Light-blue Soldier Crab has finished processing it looking for microscopic food to eat. – Source

25. The Pom Pom Crab brandishes a stinging sea anemone in each claw not only to defend against predators but to also gather food particles with the anemone’s tentacles which the crab scrapes off for its own use. – Source

26. Some crabs will carry a species of “upside down” jellyfish on their back as a means of defense against predators. – Source

27. There’s a crab named the Hasselhoff Crab because it has hair on its chest. – Source

28. The reason some crabs have one claw bigger than the other is that, if ripped off, the claw grows back over time. – Source

29. Crabs have teeth in their stomach. – Source

30. Alaskan King Crab fishing is one of the most dangerous occupations, with a 75% higher fatality rate than pilots. People have literally died for your food. – Source

31. The red king crab was introduced to the Barents Sea from the North Pacific in the 1960’s and is now destroying the ecosystem. – Source

32. Some injured crabs rip off their own limbs like it’s no big deal. – Source

33. Two new species of Vampire Crab with a bright eye and claw colors for visual communication have been identified by scientists. – Source

34. There is a crab species called “palm thief” because people claim the crabs steal shiny objects out of houses. – Source

35. Crabs have their own version of a fist pump that they use to attract mates. – Source

May 19, 2017
Latest Posts
Subscribe to Blog via Email
Did you know?
Loading...
Facts of the Day
Registration is disabled.