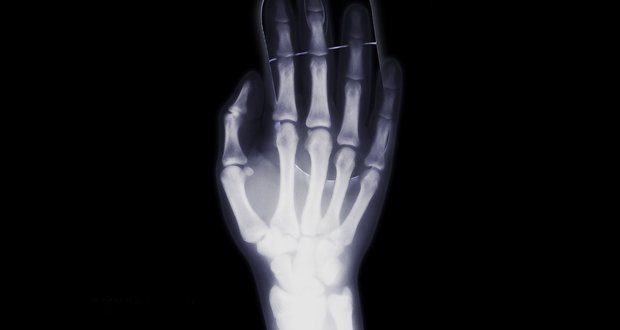 1. The first man to perform cardiac catheterization did it on himself then walked downstairs to the radiology department to take the x-ray to prove you would not die. He was fired, became a Nazi, and then won the Nobel Prize. – Source

3. Because of the shortage of vinyl recording material and censorship of some Western music during the Soviet era, bootleg recordings known as Ribs, Bones or roentgenizdat were produced on discarded medical X-ray prints. – Source

4. Scientists are working on a “GPS” that works in space. It uses x-rays emitted by pulsars to get a position anywhere, accurate to 5km. It’s called XNAV. – Source

5. X-rays are named such because Röntgen didn’t have a name for them, and temporarily used the mathematical designation “x” for something unknown. – Source

6. Thomas Edison abandoned his research into x-rays when he damaged his eyesight, and his assistant had his arms amputated from repeated exposure. “Don’t talk to me about X-rays,” he said. “I am afraid of them.” – Source

7. Nazi Germany had a research program (Wunderwaffe) that included a stealth bomber, night vision, a 1,500-ton super tank, submarine aircraft carrier, an x-ray gun, and a satellite with a concave mirror to “make an ocean boil or burn a city”. – Source

8. In the 1980’s an X-Ray machine was in use that randomly killed patients with overdoses of radiation due to a programming error. – Source

9. Serial killer Albert Fish would embed needles into his groin and abdomen. After his arrest, x-rays revealed that he had at least 29 needles lodged in his pelvic region. He also hit himself with a nail-studded paddle and inserted wool doused with lighter fluid into his anus and lit it. – Source

10. From the thirties until the seventies, fluoroscopes were common in children’s shoe stores. They are live x-ray machines that let you see the bones in your feet when you wiggle your toes. By 1970, 33 states had banned them due to health concerns. – Source

11. There is a massive X-Ray generator called the “Z machine” in New Mexico. It has produced temperatures greater than 6 billion degrees Fahrenheit. – Source

13. Florida Man Carl Tanzler, an X-ray tech, fell in love with a patient and exhumed her body when she died to sleep with her corpse for 7 years. Charges were dropped because the statute of limitations expired by the time anyone found out. – Source

14. Vincent Van Gogh painted over some of his paintings, keeping them hidden until X-ray technology brought their beauty to light. – Source

15. Because of the urban myth in the ’60s and ’70s that trick-or-treaters were given candy apples with razor blades in them, hospitals offered free x-rays for any candy apple given to children during the Halloween season. – Source

16. Until the 1970’s, the only way to do neuroimaging was to replace most of the cerebrospinal fluid surrounding the brain with air. The patient’s entire body was then rotated into different positions in order to insert air into the brain to facilitate the X-ray imaging. – Source

17. The X-rays from an atomic bomb are so powerful; they can compress lithium until it causes a fusion explosion… even without the shockwave. It’s called a “Teller-Ulam” nuclear weapon, and it uses an atomic bomb as a “spark plug”. – Source

19. A thief stole an x-ray machine from an abandoned hospital in Brazil for scrap metal and found a caesium-137 core inside, that went on to contaminate an entire community. – Source

20. When World War I broke out in 1914, Marie Curie (Pioneer in radioactivity) suspended her studies and organized a fleet of portable X-ray machines for doctors on the front. – Source

March 3, 2017
Latest Posts
Subscribe to Blog via Email
Did you know?
Loading...
Facts of the Day
Registration is disabled.