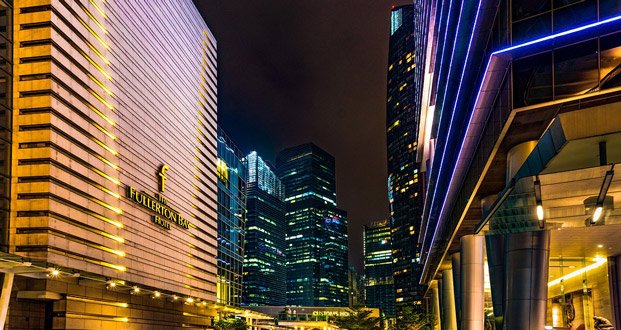 1. The “Sky Beam” that shoots out of the Luxor Hotel in Las Vegas attracts so many insects that it has established a new ecosystem of moths, bats, and owls. – Source

2. The oldest hotel in the world has been operated by the same Japanese family for over 1,300 years. 52 different generations of descendants have cared for and operated the inn. – Source

4. Hotels use RFID chips to track their towels and linens. One hotel in Hawaii saved over $15000 in stolen towels using the RFID chips. – Source

5. Half-used hotel soap is sterilized, melted down, and reformed and sent to poorer countries with scarce hygiene resources. – Source

6. Police in Clearwater, FL received 161 calls to 911 from the rooms of the Fort Harrison Hotel within a span of 11 months. Each time, Scientology security denied them entry, insisting there was no emergency. – Source

7. H.H. Holmes, a 19th century serial killer in the U.S., opened a hotel which he had designed and built for himself specifically with murder in mind. It included soundproofed bedrooms, trap doors, walls lined with blowtorches and two incinerators. – Source

9. The Aurora Ice Hotel in Alaska was made entirely of ice. Ice walls, ceiling, beds, bar, barstools, even martini glasses were made of ice. It was closed by the fire marshall for not having smoke detectors. – Source

10. Las Vegas’s MGM Grand Hotel & Casino had its worst financial week ever when it hosted a physicist convention. – Source

12. Fairmont hotel chain has resident dogs who greet guests in the lobby, accompany them on walks and to make them feel at home. – Source

13. In 2013, a 39-story hotel in Tokyo “disappeared,” in that it was demolished without explosives or a wrecking ball. All 39 floors were disassembled by a small crane from inside the building and there’s a time-lapse of it shrinking floor by floor. – Source

14. The hotel that inspired Stephen King to write “The Shining” plays the Kubrick film on a continuous loop on channel 42 for all guests. – Source

15. There is a secret train platform beneath the Waldorf-Astoria hotel in New York. – Source

16. There is a hotel that sits right on the border of Switzerland and France. A set of stairs started in France and ended in Switzerland upstairs. The upper rooms were thus ideal as a hideout for French Resistance members during WWII as the Nazis weren’t allowed to cross into the Swiss side. – Source

18. One of the largest hotel suites in the world is located 22 stories under the surface in the Grand Canyon Caverns. One night for two people in this 65 million-year-old cave is around $700. – Source

19. There is a hotel in Kenya that also serves as a giraffe sanctuary, and the giraffes stick their heads into the windows to get snacks at breakfast time. – Source

20. The Hyatt Regency Hotel in KC, MO had multiple crosswalks that collapsed on top of each other. 114 died and another 216 were injured. Up until 9-11, it was the largest structural collapse in the USA. – Source

21. There is a hotel in Bolivia made completely out of salt, and licking the walls is strictly forbidden. – Source

22. In 2014, chlorine gas was released in a hotel hosting a furry convention, injuring 19 people. The apparent chemical attack is unsolved, and the source of the chlorine is still unknown. – Source

23. When Thomas Edison installed the modern electric lighting in the Ponce De Leon Hotel in St Augustine, FL they had to hire extra staff to turn lights on and off for guests that were scared of being shocked. – Source

24. If you don’t pay a hotel bill in Ontario, there is a law that says that hotel can sell your horse. – Source

25. A Chinese construction company built a 30-story hotel in 15 days. The hotel is energy efficient, has air 20 times cleaner than comparable hotels, and can withstand earthquakes up to magnitude 9. – Source

March 15, 2018
Latest Posts
Subscribe to Blog via Email
Did you know?
Loading...
Facts of the Day
Registration is disabled.