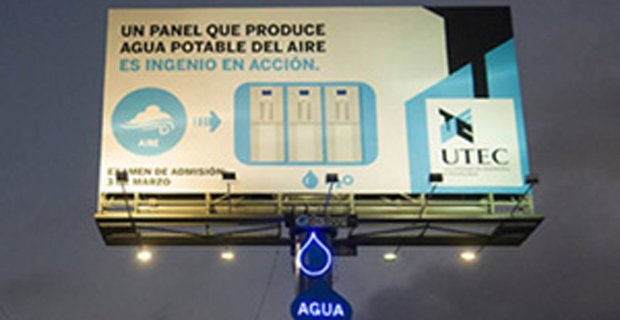 1. In Lima, Peru there is a billboard that creates drinkable water out of thin air. – Source

2. Yungay, Peru was the site of the deadliest avalanche in history. In 1962, two American scientists predicted the calamity and were consequently forced to flee by the government. 8 years later, their prediction came true and 20,000 people were killed in a day. – Source

3. On Dec 25th (Christmas), a town in Peru celebrates ‘Takanakuy’. Men, women, and children settle grudges from the past year with a fist fight in the town center. After the fight, fighters will drink alcohol to numb the pain and bring in the New Year. – Source

4. La Rinconada, Peru the highest elevated city on earth has a gold mine where miners work for 30 days without pay. On the 31st day, they are allowed to take as much ore as they can carry on their shoulders. – Source

5. A species of orchid evolved to look like a replica of a monkey’s face, grows in the cloud forests of Peru and Ecuador. – Source

6. There is a bridge made of grass in Peru that was originally built around 500 years ago and is rebuilt every June. – Source

7. In 1600 a volcano eruption in Peru killed approximately 2 million in Russia. – Source

8. In order for Coca-Cola to continue to exist in its current form, the company has a special arrangement with the Drug Enforcement Agency (DEA) to allow them to import dried coca leaves from Peru in huge quantities. – Source

9. In 1930, Albert Einstein supported the idea of a Jewish Homeland in Peru. Oppenheimer told him: “the land and climate are quite suitable”. – Source

10. The world’s largest cocaine producer is Peru. It has dethroned Colombia. – Source

11. Gocta Falls in Peru, the 3rd highest waterfall in the world, was not even discovered by the outside world until 2005. – Source

12. The mysterious 120-ton boulder walls of an ancient fortress in Sacsayhuaman, Peru have survived thousands of years, including earthquakes, in part because they are “fit together with such precision you can’t fit a piece of paper between them.” – Source

13. There is a Greek community in Peru (650) descended from 7 Greek merchant mariners, who survived the onslaught of the Chilean – Peruvian war in 1880 because they raised a Greek flag. – Source

14. Incans in Peru would purposely deform infant heads to stretch their skulls out permanently; the nobility would have significantly longer skulls than everyone else. – Source

15. During WW2 Peru deported its entire Japanese ethnic population to the US to live in the Camps. – Source

16. Iquitos, Peru is the largest city in the world inaccessible by road. It’s located deep in the Amazon rainforest and has over 400,000 people. – Source

17. The earliest known telephone in the West were made of resin-coated gourds and 75 feet of twine. The only known example is from the Chimu empire of Peru and is between 1200-1400 years old. – Source

18. Peru and Ecuador have fought four wars over differing interpretations of an 1830 treaty which no one can find. – Source

19. Peru is the world’s #1 producer of counterfeit US dollars. In 2015, over 16 million forged bills seized in the US were of Peruvian origin. The forged dollars are finished by hand, giving them an exceptional quality which has earned the country its top spot. – Source

20. Vultures with GoPros and GPS trackers are used to find illegal trash dumps in Peru. – Source