1. In 1907 a woman was arrested and charged with indecency for wearing a one-piece swimsuit. Her case led to relaxed swimwear restrictions nationwide. – Source

2. The bikini swimsuit was named after the nuclear explosions that destroyed Bikini island. The inventor wanted to imply the bikini was as momentous an invention as the new bomb. This was a time when beautiful women were “bombshells” and anything cool was “atomic.” – Source

3. In 2008 Speedo, in collaboration with NASA, released a swimsuit so drag-resistant that it was banned from use in swimming competitions for giving swimmers using it too much of an advantage. – Source

5. There’s a special swimsuit known as a Burqini that “[preserves] Muslim modesty.” – Source

6. The Sports Illustrated Swimsuit Issue was created to fill the winter months between sports seasons. – Source

7. In Australia, swimsuits are known as “cossies.” In the UK and Ireland, they are called “togs.” – Source

8. There is a sport called Extreme ironing which involves people diving with swimsuits underwater to iron the clothes. – Source

9. After the 1951-1963 Atomic Trials on the Nevada Test Site near Las Vegas, the public viewed the bombs as a spectacle, going so far as to have fashion shows dedicated to mushroom-cloud-esque swimsuits, despite fear of a bad reaction. – Source

10. In the 1950s, swimsuits with pointed breasts, known jokingly as “high beams,” were popular. Some suits even offered inflatable bras that could be blown up to the wearer’s desired size. – Source

11. Susan Rosen and Steinmetz Diamonds designed the most expensive swimsuit in the world with more than 150 carats of D flawless diamonds which are all set in platinum. It is a bikini worth $30 million dollars. – Source

12. Perhaps the most celebrated cinematic swimwear moment of all time is when Bo Derek ran down the beach in hair braids and a nude swimsuit in the movie 10. The most celebrated bikini moment was when Ursula Andress emerged from the water donning a white bikini as Honey Ryder in the 1962 Bond film Dr. No. – Source

13. Swimsuits now can be made from UV-protective fabrics. The suits can offer 50+ UPF, blocking up to 98% of the sun’s rays.- Source

14. Tan-through swimsuits are created using thousands of tiny pores that let enough sunlight in to create a tan-free line without appearing naked. – Source

15. The U.S. women’s apparel industry is worth nearly $100 billion, of which swimsuits is 2% at $2.2 billion (including one-pieces and accessories). The entire swimsuits and beachwear market retail value is nearly $13 billion. – Source 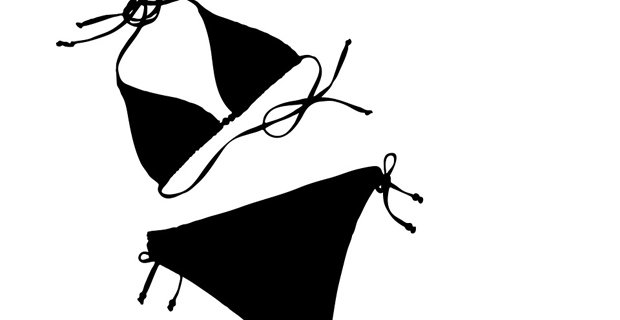 16. China is the world’s largest exporter of swimsuits, constituting approximately 70% of the global shipments. – Source

17. In the famous make-out scene on the beach in the film From Here to Eternity (1953), censors demanded Deborah Kerr’s swimsuit have a skirt to avoid being too provocative. – Source

18. Participants in the Miss USA swimsuit contest are judged by “body symmetry.” – Source

19. In 1964, Rudi Gernreich (1922-1985), cofounder of one of the first American gay rights groups, the Mattachine Society, created the shocking “monokini” — a swimsuit for women consisting of the lower half of a bikini with two thin halter straps which came up between the cleavage and around the neck, leaving the breasts bare. Today the term is used for any women’s topless swimsuit. – Source

20. In the 1950s the California deserts were transformed to provide fantasized portrayals of the Middle East. Instead of swimsuits, and evening gowns young women attended festivals dressed as harem girls, with bare midriffs, and billowing pants. – Source