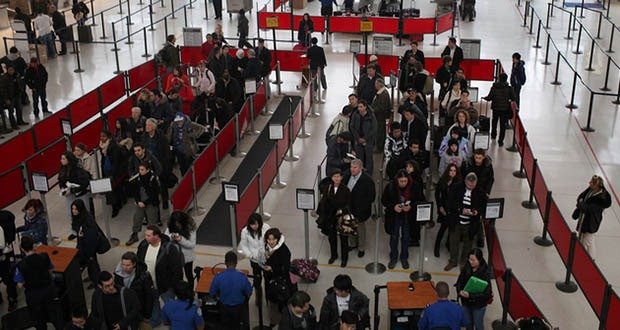 21. This happened a few years back when I was a kid. After a long long flight through a few connections from Kuwait, my dad wakes me up telling me that the plane has landed and we take our things from the overhead compartment and wait for the signal that it is safe to leave the plane. The signal is given and we start leaving the plane to enter JFK and head to the security point to stamp our passports.

Everything goes well and after a few questions that the immigration officer had asked my dad, his passport was stamped. The officer opens my passport and looks at me with a nice smile and says “hey there… What brings you to the states?”. With a big grin on my face I say “I come with dad” and he replies “and what is he here for?” and the most fu*ked up thing ever come out of my mouth. Having English as my second language made me go with “he is a terrorist” with the grin going from ear to ear from the excitement that am speaking English to a native speaker.

Well what I meant to say if you didn’t already get it is “tourist.” From there on, there was no more grin. We get pulled into separate rooms and I get asked a series of questions. I kept using the word terrorist and it didn’t help at all. Someone who speaks Arabic was brought and asked me what I meant when I called him that and I explained in Arabic. He then laughed and the officer in the room looked at him weirdly. When he told the officer about the misunderstanding he laughed too.

I get reunited with my father after a while and he told me not to speak English until I learned it properly.

22. My boyfriend’s neighbors just had a baby. The husband came outside to say hi. He said his wife was out to dinner with her friends so he was watching The Martian. Thinking that was a cute nickname for a newborn I said “it’s okay, all babies come out like that”.

23. I’m a single guy and whenever my daughter asks what I want as a present, I always say she should bring me back a pretty girlfriend. It’s like a running joke with her usual response being “she better not be prettier than me.”

Anyway I was recently really ill with tonsillitis. Like the most ill I’ve ever been as an adult, and after a week of it I decided to go to the docs to get some antibiotics. We’re in the waiting room of the surgery and my daughter is reading through the magazines. She’s holding up pictures of different women asking me “how bout that one Dad? or that one, or that one” I’m like “what for?” thinking she means hairstyles. She comes and whispers in my ear “for a new girlfriend” (bless her).

I tell her magazine people are not real and she needs to find me a real person to be my girlfriend. And that I would be really silly if I cut one of them out, put it in my pocket and told everyone that she was my girlfriend! While we’re having this stupid conversation a large elderly woman shuffles across the waiting room and sits opposite us. She remarks about daughter and how cute and well behaved she is. My daughter looks at her, then at me, then back at her and says, as loud as anything, “YOU CAN’T HAVE HER AS YOUR GIRLFRIEND, SHE EATS TOO MUCH!!!”

Before I had even processed what she just said, the stunned silence was broken by people giggling in the background, and the woman just “hmmphd” and turned away before I could apologize. ( I did say sorry).

24. A few months ago, I got back home in the early hours of the morning with no key. I live in a terraced house and so usually use the back door as an entrance. So I went around the front of the house and proceeded to lift open a grate which I thought would lead into my basement. I opened the grate and slid through this really tight sloping hole. Got covered in cobwebs, the lot. When my feet touched the ground I couldn’t see a thing. Pitch black. I then stumbled into something metallic, like a drum kit. I turned my phone light on. I don’t own a drum kit. Sh*t, this isn’t my house.

At that moment my next door neighbor comes running into his basement with a baseball bat ready to knock me out. The lights switched on and I’m just stood there with the most sorry look on my face. He laughed it off in the end but I still felt like such an idiot.

25. I am a travel RN. I just started my new shift at a hospital in Texas. In the nurses station, there is this grey button on the wall that kind of resembles a garage door opener. I asked a few nurses what the button was for, and no one seemed to know. Naturally, I pushed it. Nothing happened. No lights came off or on, no secret doors opened up. I pushed it a couple of times really fast, thinking something might happen, still nothing. So I go and sit down to continue charting. Within a minute, four security guards came running, one from each entrance. They were all sweaty and out of breath- with panicked expressions on their faces. Turns out, that is the button you push when someone has a gun or bomb. You’d think they would’ve mentioned this in orientation.