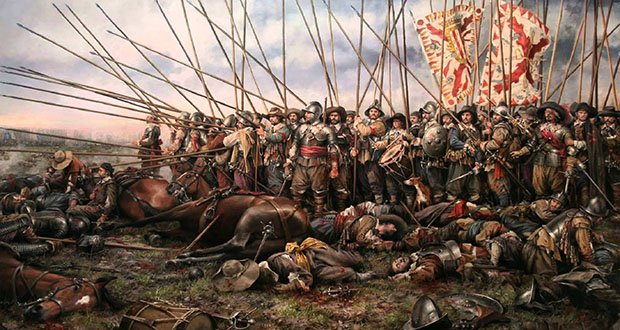 So one of our readers asked us this question the other day: How common was “friendly fire” in medieval battles? Did soldiers commonly die because they got stabbed by their brothers in arms by mistake?

As the ‘mechanics” of Medieval battle, so to speak, are pretty comparable to that in Ancient warfare (not to mention that medieval sources don’t seem to really talk much about the ‘mechanics’ of fighting) I think I can help you out here by using examples from the Classical world.

There were lots of ways to die in ancient or medieval fighting other than being transfixed or beaten to death by an opponent. For one, it was a phenomenon of the ‘rout’ stage of a battle that soldiers might deliberately attack men of their own side, in wild panic or in a more deliberate attempt to clear a path. This phenomenon pops up in literary accounts of the conduct of wild, terrified troops. Here’s an example from a battle between the Romans and Gauls in 350 BC under the consul Marcus Popilius Laenas, from Livy Book 7.24:

“…the Gallic host, superior to any feeling for such losses, sprang up like a new army, and urged their fresh troops against the victorious foe”.

At this stage, the battle had been going on for a while. The Romans were nearing exhaustion and the consul rashly exposed himself during the fighting, and got a javelin in the shoulder for his trouble, forcing his guards to take him off the field to dress the wound. But once he had done this, he rode back to the front and re-invigorated his troops, who:

“drove back the foremost of the Gallic maniples, and then, forming in wedges, burst through into the midst of the main array…barbarians thrown into confusion, having no definite orders nor commanders and, turning, charged upon their fellows.”

In this example, the section of the Gauls whose nerve broke first actually charged a body of other Gauls to clear a path for their escape. We might imagine that this might have resulted in a number of ‘friendly fire’ casualties, especially if the Gauls receiving the charge really tried to stop the runners. This appears to have been a relatively common occurrence in battlefield routs. A more visceral depiction of this phenomenon can be found in Polybius’ description of Zama in Book 15.13, after Hannibal’s front line of mercenaries had broken and tried to get away from the Romans through their own second line:

“…the [Carthagingian second line] by contrast shrank back in cowardly fashion and failed to support the mercenaries. The result was that at last the [mercenaries] themselves gave way; it seemed to them that they had been abandoned by their own side, and so as they retreated they turned upon the soldiers in their rear and began to cut them down. This action forced the [second line] to die bravely in spite of themselves, for when they found they were being slaughtered by the mercenaries, they were obliged quite against their will to fight both the barbarians and the Romans at the same time: when they had been brought to bay they defended themselves with desperate courage and killed a great number both of the mercenaries and the enemy.”

‘Friendly’ casualties could occur during partial routs as officers used violence to compel men to stand and fight. Standard bearers and centurions were particularly liable as targets of exemplary punishment for their decisive role in motivating most soldiers to stand their ground (Livy 2.59). In the Battle of Apulia of 294 BC against the Samnites, after an initial flight the Roman consul, Marcus Atilius formed up his cavalry at the entrances to the Roman camp with spears leveled, so that the Roman soldiers had the choice of going back to the fight or physically fighting the consul and cavalry. I can’t find the specific sources at the moment, but I am fairly sure I have read of at least one example of an officer killing a standard bearer during battle to set an example. Sidebottom (2004, 109) for instance takes it for granted that officers on occasion killed fleeing soldiers. The role of coercive violence in forcing armies to fight, even the vaguely ‘democratic’ Mid-Republican Roman armies, make it not hard to imagine that in the heat of battle violence might occur between officers and men whose fear of the enemy has overwhelmed their shame and respect for authority. Indeed, this is why the Romans put the Centurion’s second in command, the optio, at the back of maniples and cohorts, with a big stick in their hands.

Combatants could die during routs, and no doubt during the press of fighting but especially during routs, due to ‘crowd-crush’ or being trampled. Livy provides another example of this occurring in Book 10.28, after an impetuous commander by the name of Decius committed his cavalry to an unfavorable engagement against more Gauls:

“Twice they compelled the Gallic cavalry to gave way. At the second charge they advanced nearer and were briskly engaged in the midst of the enemy’s squadrons, when, by a method of fighting, to which they were utter strangers, they were thrown into dismay. A number of the enemy mounted on chariots and cars, made towards them with such a prodigious clatter from the trampling of the cattle and rolling of wheels, as affrighted the horses of the Romans, unaccustomed to such tumultuous operations. By this means the victorious cavalry were dispersed, through a panic, and men and horses, in their headlong flight, were tumbled promiscuously on the ground. The same cause produced disorder even in the battalions of the legions: through the impetuosity of the horses, and of the carriages which they dragged through the ranks, many of the soldiers in the van were trodden or bruised to death.”

This had also happened in the battle I mentioned before in 350 BC against the Gauls: while the Gauls stiffened up later, they had started the battle by trying to attack the Romans uphill, which went poorly:

“[The Gauls who had] fallen upon one another wrought greater carnage than even their enemies had done; for so headlong was the rout, that more were trodden under foot than slain with the sword.” (Livy 7.23)

I cannot personally think of many instances where ‘friendly fire’ is specifically mentioned to have occurred in ancient battles during the actual fighting, though I’m sure mistakes did occur, especially with missile weapons which could be used heavily in all stages of Roman-era warfare (Plut. Sulla 18-9) For more information on this continuous missile-warfare even during close-combat, see Zhmodikov, “Roman Republican Heavy Infantrymen in Battle (IV-II Centuries B.C.),” 2000. There may be examples of friendly fire from missiles in the literature, I just can’t think of any.

As Ancient and Medieval warfare were waged with basically the same technology and the ‘mechanics’ of infantry and cavalry battle in these eras are basically the same, even if they might be different in context, scale, appearance, etc, I think all of these examples I have provided must have occurred in Medieval battle as they certainly did in Ancient battle. Soldiers whose fear of the enemy has overwhelmed them may attack their own side accidentally or deliberately. Tactical developments may cause one or even large numbers of men to be knocked off their feet and be crushed in the fighting. Officers may deliberately and conspicuously kill their own soldiers to set an example to the rest. And without a doubt, when javelins were thrown and arrows fired over the heads of engaged troops, which may have been a common occurrence, there is no question that occasionally a friendly would be struck by a missile. I hope this helps answer your question.

AskUs: What happened to Soviet sleeper cells in the U.S after the Soviet Union collapsed?

AskUs: Why do we "zone out", or stare into space?

October 20, 2016
Latest Posts
Subscribe to Blog via Email
Did you know?
Loading...
Facts of the Day
Registration is disabled.