So one of our readers asked us this question the other day: How did Medieval armies tell which side a soldier was on? How common was it for a soldier to be killed by someone in his own army, being mistaken for an enemy?

The Middle ages (and the earliest Modern period that followed) was an era before uniforms as we understand them. Compared to say, the 18th century, there wasn’t a standardized, color-coded way to tell friend from foe. Instead, there were a variety of kinds of battlefield identifications used in different times and places in the medieval era to identify individuals, groups within an army, and armies. I will discuss the period from around 1250 through 1500 or so. 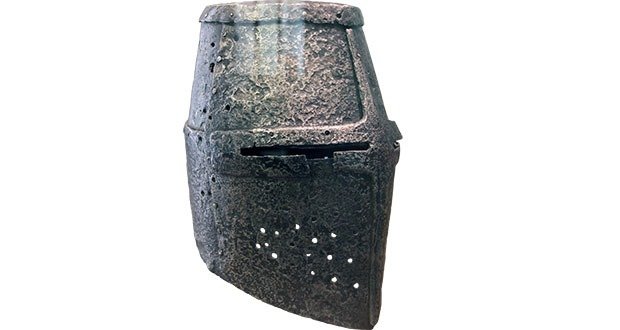 Battlefield identification had always been an issue. In the 13th century, the introduction of closed-faced helms(pic above) made personal identification on the battlefield and in the tournament even more difficult. While older scholarship mentions helms as the impetus for crests and heraldry, more recent work questions this – schemes to identify knights existed prior to closed-faced helmets. That said, in the 13th century means of identification became much, much more common. In the late 12th and 13th century, two ways of identifying individual soldiers developed. 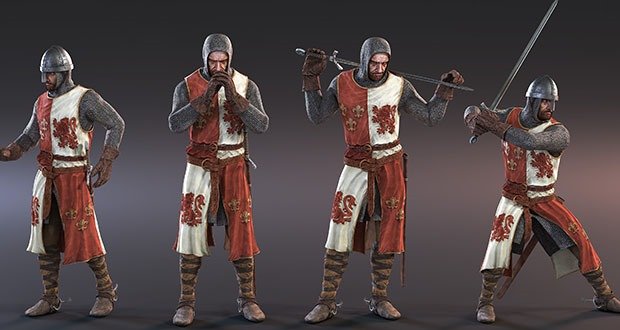 The first was heraldic surcoats and shields – coloring the surcoat (the loose robe worn over the armour in the 13th and 14th centuries) and shield with specific colors in specific patterns to identify a particular man at arms. The systems of heraldry is much more complicated than this, and relates to the construction of the knight as a social identity in the 13th and 14th century, but the battlefield/tournament use is still important to remember.

The second was the crest, a sculpted ‘topper’ for the helm generally made of parchment or leather. The design on this would often be somehow identifying, though it was not necessarily related to the user’s heraldry. Finally, in the 14th and 15th centuries as plate armor developed, armor itself was decorated in ways that were individualized (for those who could afford it). The Black Prince’s Guantlets had gadlings (brass knuckles, basically) in the shape of a lion, one of the animals emblematic of the English monarchy. 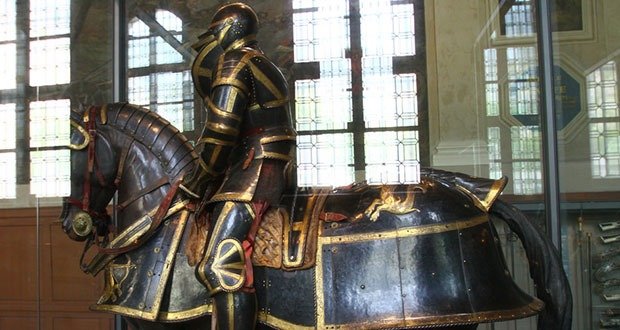 In the Early modern period, armor decoration became more developed – the armor of say, Otto Heinrich, Count Palatinate of the Rheine, was gold and black, to match his colors. Charles V had his armor decorated with the symbols of his domains – primarily Burgundy (and more specifically, the Low Countries, which he had inherited from the Duchy of Burgundy). Such decorated armor would help identify its wearers to friends (so that they could rally to defend them) and foes (so that they would know to capture them alive).

The effect of this was that an individual man at arms could now be identified by those who knew his crest and heraldry or his armor – such as by people who knew him personally, people fighting next to him, or (as the system of heraldry developed) professional heralds. However, since they are individual identification neither crests nor heraldric colors helps identify which side someone is on unless you know which side he is on, indvidually. That said, heraldry and crests served another important role – when soldiers were captured for ransom, it allowed their easy identification. It also allowed for the identification of the dead after battle (assuming that the corpses had not already been stripped, as often happened). 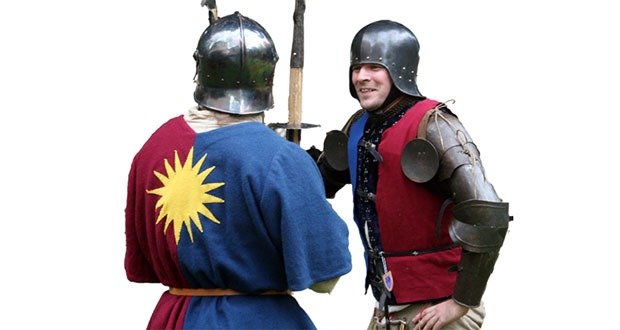 A solution that we see in the 15th century is the introduction of livery coats to identify the men in a certain lord’s retinue. This is most extensively used in England during the period of the Wars of the Roses. A livery coat was a garment provided by a lord to his retainers (contracted soldiers) as part of their contract of ‘livery and maintenance’ (along with pay, food and wine/beer). It would be in a specific color, that would not necessarily be related to the Lord’s heraldric colors, and often bear a badge associated with the lord (again, not related to the lord’s heraldry, necessarily). For example, Richard III’s men wore a badge with a boar on it. Wearing livery allowed men to identify the fellow members of their retinue, but didn’t necessarily identify which side every retinue was on. 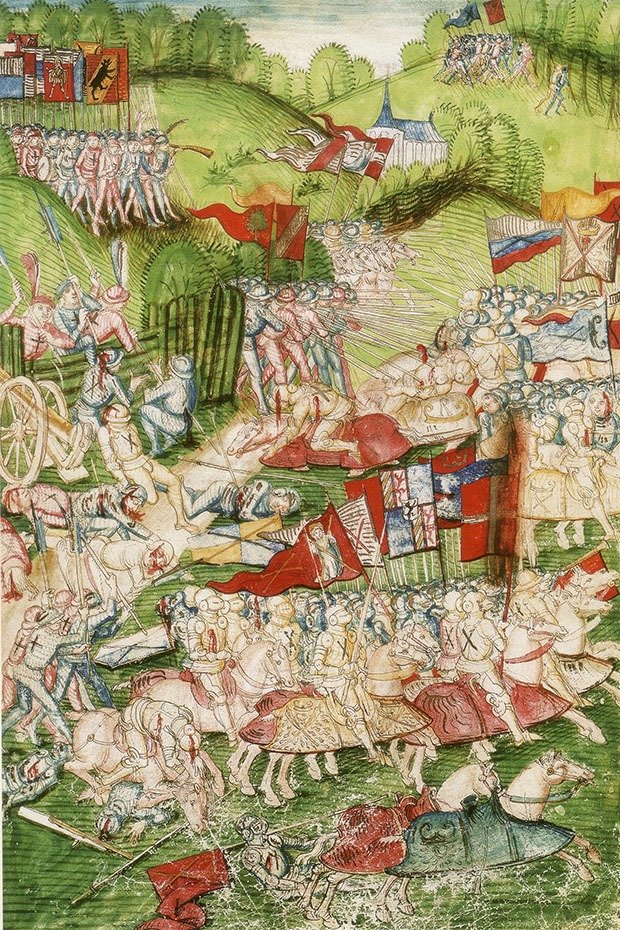 Finally, there were army identifiers. Famously, Henry V had the English Army at Agincourt wear the red cross of St George. Similarly, in the late 15th century the Duke of Burgundy had his soldiers wear a red St. Andrew’s cross to identify themselves. In the above illumination from a Swiss chronicle you can see the soldiers of Burgundy wearing an ‘x’ shaped cross fighting Swiss soldiers with a ‘+’ shaped cross, the cross of Switzerland. These army identifiers might be worn on a livery coat, or sewn onto the clothing, or displayed on armor in some way. However, note that the soldiers are not wearing anything resembling a ‘uniform’ – the cross is a modification to their existing clothing, not a uniform garment worn by everyone.

In the end, there was not a uniform (heh) way of identifying one side from the another on the medieval battlefield. Friendly fire incidents did occur – at the Battle of Barnet in 1471 some Lancastrians mistook their own reinforcements for Yorkists, throwing the Lancastrians into disarray as they fought each other. However it should be noted that Barnet was fought in the fog – unusually low visibility for a medieval battle (though Towton 10 years earlier was fought in a snowstorm). Indeed compared with the smoke of an early modern battlefield, visibility on a medieval battlefield would be relatively clear (though this clarity would decrease as the 15th and 16th centuries progressed).

It is important to remember that the melee was not necessarily the normal shape of medieval combat. In infantry warfare especially, tight formations were the norm. As Christine de Pisan wrote in 1409 (as quoted in Keen’s ‘Medieval Warfare’): ‘Two great evils can follow from a disordered formation: one is that the enemies can more easily break into it; the other is that the formations may be so compressed that they cannot fight. Thus it is necessary to keep a formation in ranks, and tight and joined together like a wall.’ In this case it would be obvious who your friends were (the man next to you) and who your enemies were (the guy in front of you trying to jab a pike into your face). Contemporary military historians do not necessarily think of pre-modern battles as bloodthirsty free-for-alls, but instead a series of attacks and counter-attacks that could at times seem quite furtive as each side sought to maintain their cohesion and exploit any weaknesses of the enemy. That said, there were times – when cavalry charged, when reinforcements arrived, or when a group of men fled, that things could get quite chaotic. Then a badge of your army or lord might help you…or it might not.

Moffat, Ralph – THE IMPORTANCE OF BEING HARNEST: ARMOUR, HERALDRY AND RECOGNITION IN THE MELEE from Battle and Bloodshed, the Medieval World at War, Lorna Bleach and Keira Borrill, editors.

Capwell, Tobias – Masterpieces of European Arms and Armour at the Wallace Collection

Strickland and Hardy – the Great Warbow

Edge and Paddock – Arms and Armour of the Medieval Knight

AskUs: Ancient Greek men thought the ideal male body possessed a small penis. Do we have any idea what Greek women thought?

AskUs: Why do men appear to have a "stitch line" or "scar line" at the base of their ballsac?