So one of our readers asked us this question the other day, Based on ongoing experiments, how far away are we from nuclear fusion power? I know there’s the ongoing joke of nuclear fusion being 50 years away every year, but based on current experiments, does that still hold true?

Depends on what you consider “fusion power.” Starting and maintaining a fusion reaction for some time? Been there, done that. Getting more energy out than you put in? On the todo-list, check back at the end of the next decade. Commercially viable fusion reactors? Ehhh… 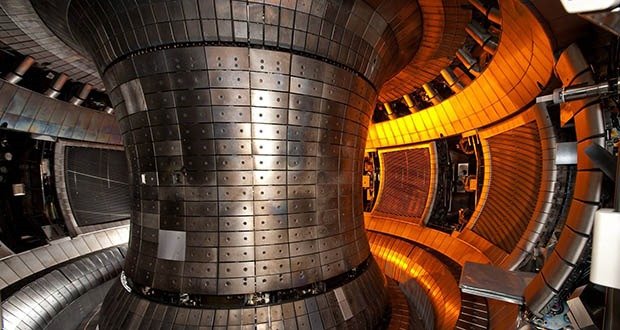 Scientists have already generated fusion reactions in various tokamak-reactors (donut-shaped) around the world. The problem is that these tokamaks were too small and more energy was used up sustaining the reaction than was produced. These reactors were meant purely for research. 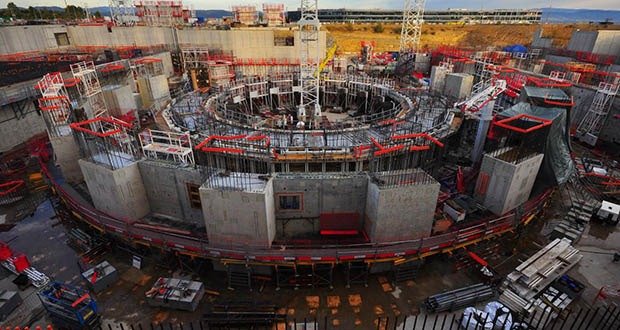 Currently under construction somewhere in France is ITER, which will be, with some distance, the largest tokamak reactor and will be the first fusion reactor to generate more power than it uses. But it’s still very much a research-device, loaded with all kinds of sensors and with a design goal of sustaining the reaction for only 1000 seconds. Parts of the reactor design haven’t been finalized yet and are still under research.

The goal is to have the first plasma established around the turn of the decade and the start of fusion operation in the second half of the next decade. 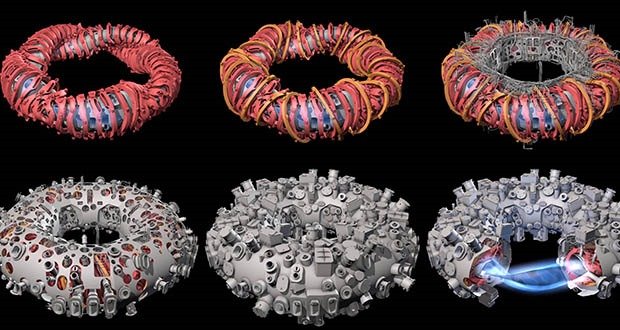 Competing with tokamaks are so-called stellarators, which use a more complex shape to make the fusion plasma easier to stabilize. Recently, the Wendelstein 7-X hit the news because it had created a very high temperature hydrogen plasma. The W7-X, however, is not designed to actually start a fusion reaction, it is primarily a design study into the viability of the concept and the properties of such high temperature plasmas. 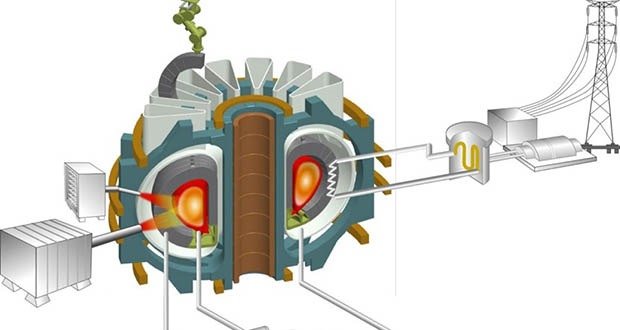 Following ITER and W7-X, the DEMO project is the project that will involve the creation of the first commercially viable fusion reactor, able to operate fusion plasmas for long periods of time, while extracting energy out of it. The project is still in an extremely early stage and most recent estimates of when it will become operational point is the second half of the 2040’s, but this will greatly depend on what is learned at ITER.

Actual commercial implementation of fusion power will follow the successful operation of DEMO, building on what is learned in that device. So yeah, that’s about 50 years away. 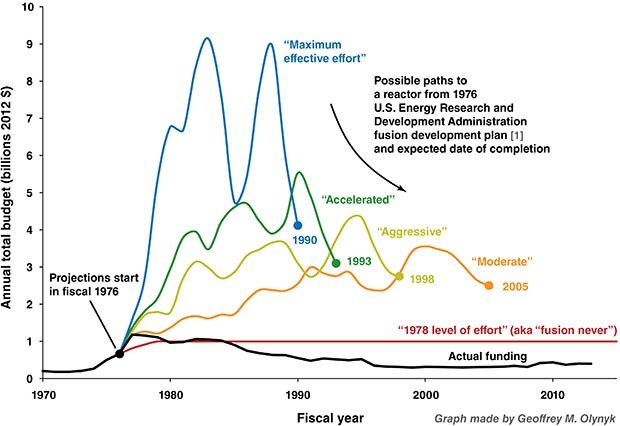 One thing that would help fast track fusion power would be throwing more money at fusion research. See the above sad, sad plot, for example. That’s just the US’ funding. ITER is an international project, with total funding somewhere in the ballpark of 6.7 up to 7.3 Billion Euros, funded by the EURATOM, China, India, Japan, Russia, South Korea and the USA with various degrees of monetary commitment.