So one of our readers asked us this question the other day: Describe in detail how horrific the experience of death by nerve gas would be?

I’m not telling you this to make any political point. I’m just going to inform you about nerve agents.

Your brain interfaces with your body at junctions between your body and your nerves. Communication at these junctions (called synapses) is chemical: nerve agents disrupt this signaling.You’ve likely consumed ethanol, nicotine, or cannabis: drugs which cause pleasure. 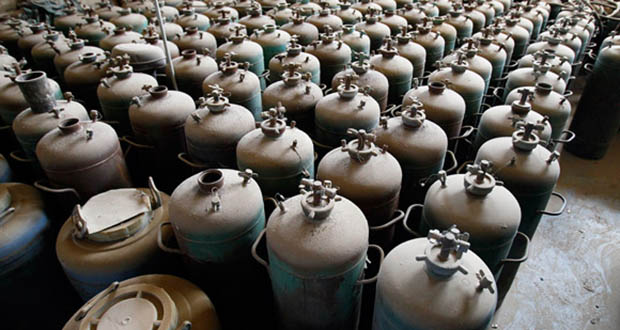 Chemical weapons are drugs which cause pain. Let’s say you’re walking with a group of people, and you’re overcome by a cloud of sarin gas. The first thing I bet would happen is you would know something was profoundly wrong; the same way you know you’re getting sick. You’d feel it as a tightness in your chest and limbs – your eyes, nose, and mouth would all feel runny. You’d start sniffling, and tearing up, and the feeling of wrongness would intensify to something like motion sickness, but worse. Much worse.

Have you ever had a cramp? Where a muscle tightens up, very painfully? You and the people around you start to twitch, and you start to feel cramps coming on; everywhere. At once. Every muscle in your body begins to hurt and contract. By now, you and the crowd know something is wrong. You might start running, to try and get away. You make it a few steps, and then people begin to fall. It’s hard to control your own movements, as well; the horrendous muscle cramping is keeping you from doing what you want, and the pain is so bad you can’t help but eventually lose balance when your legs spasm out from under you.

You try to crawl, but the convulsions keep getting worse – by now, the nausea (imagine unendurable sea sickness) is so intense you’ll likely throw up. You can’t move; you try, but your body won’t listen. All you can do is feel waves of agony as your muscles are literally signaled to attempt to tear themselves apart inside your skin. Your eyes and nose and mouth start to burn; you can’t rub them, because your arms won’t keep still. You’re aware there’s drool all over your chin and face, but you’re in far too much pain to care. If you haven’t thrown up yet, you will. It relieves nothing.

You’re aware that you’ve wet and soiled yourself. Although you can only catch glimpses between spasms, you can see and smell that everyone convulsing on the ground beside you has gone through the same. You dry heave, again and again, from the nausea and the horror and the fear; but your stomach has emptied itself of all its contents already. Your eyes and nose and mouth are on fire – they burn so badly, yet when you claw at them with flailing limbs it only hurts the more. All you can do is scream. But you cannot. Your diaphragm, which controls your breathing, also spasms uncontrollably. You try and gasp for breath, but your chest fills with hurt, instead. This is not the worst part.

Your brain is a clever organ. Animals may occasionally come across poisons, so your brain insulates itself with a layer of fat called the Blood Brain Barrier (recall the fact that oil and water don’t mix; drugs dissolved in water (your blood) cannot get through the fat (oil) very easily).

Because your brain is thus protected, your cognition is spared. You remain perfectly aware, lucid, and conscious while all this is happening to you. There is no drunkenness, no dullness to relieve you or soften the experience. In full wakefulness, you are trapped in your excruciated body until its convulsions suffocate you to death. If you’re lucky.

If you are not lucky, you do not die. You endure it. You lie on the ground surrounded by death and pain and your body keeps spasming and every breath is sucked in and torn out and your eyes are forced to weep. (WARNING!! click on this video at your own risk. The video shows people suffering from the effects of nerve agent) You lie there and you hurt in such a way I doubt you or I could properly conceive of it. That is what nerve agents are like.