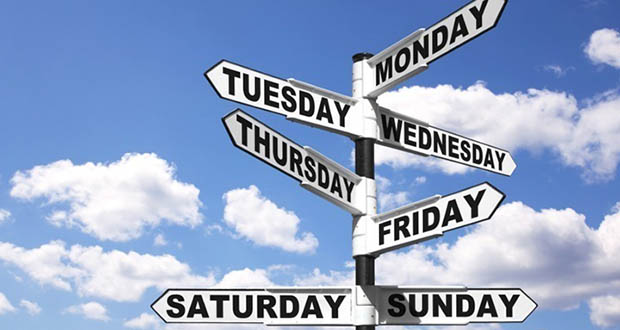 So one of our readers asked us this question the other day: How is it that we have 7 days in a week? And how is it possible that these days have the same names in India and the Western World: e.g. the name Monday comes from the Moon, and in Hindi Monday is called ‘Moonday’ (Somwar), just like Sunday, etc.?

The origins of the seven-day week go back to ancient Babylon and early Judaism. However, the Babylonian seven-day week was based on a quarter of a lunar cycle, and was continually adjusted to line up with the moon’s actual phases – because a lunar cycle is approximately 29.5 days, not 28 days (4 x 7). Our fixed unvarying seven-day week comes from Judaism, which recognized every seventh day as the Sabbath, to recognize the seventh day on which God rested after creating the world.

Let’s ignore the names of the days and refer to them by numbers: we’ll call the Sabbath “Day Seven”, for example.

This seven-day week was used by the early Christians – who started as a Jewish sect. Jesus Christ was reportedly crucified on the day after the Sabbath: Day One of the Jewish week. In 325 A.D., the Christians decided that worshipping the Lord on the day he was crucified (Day One) was more important than the day that God rested (Day Seven), so they changed their special day to Day One of the week, rather than Day Seven. However, they didn’t change the order of the days: all they changed was which one of the days was more important. So, the Christians still had Day Seven at the same time as the Jews had Day Seven every week, and Day One at the same time as the Jewish Day One – they just did different things on those days.

Then, the Christian seven-day week spread across Europe along with Christianity. This replaced all the previous “weeks” found across Europe, such as the quarter-lunar-cycles that were marked by early Celt and Gaul cultures, and the five-day week found in parts of pre-Christian Ireland. And, even though different areas gave different names to those seven days, they all followed the same order. You couldn’t possibly worship the Lord on Day Four when He was crucified on Day One! So everyone’s Day One occurred at the same time – even if some places called it “Day of the Lord” (the Latin “Dominica” became “Dimanche” and “dominga”) and other places called it the “Day of the Sun” (“Sonntag”, “Sunday”, “Raviwar”). It was Day One in the Christian seven-day week at the same time everywhere across Christendom.

Eventually, this seven-day week supplanted all earlier weeks in Europe, even in areas that didn’t adopt Christianity. And, when the Europeans went out colonizing the rest of the world, they took their Christian seven-day week with them. And, again, everyone had Day One at the same time. It was never Day Three in one region at the same time that it was Day Six in another region.

Muslims also played a huge role in spreading the 7-day week across the Middle East and eventually even to India and China.

The weekend is observed on different days in a number of countries throughout the world. Israel observes the weekend Friday – Saturday, while most Muslim majority countries observe is either Thursday – Friday or Friday – Saturday. These are both for religious reasons. The weekend that most of the West celebrates originates from the Christian Sabbath being on Sunday. Also, Saudi Arabia a couple of years ago switched its weekend suddenly from Thursday – Friday to Friday – Saturday through a royal decree. This was to allow the country to interact more with international stock markets since it is such a large exporter of oil.

AskUs: How powerful were Soviet computers? What programming languages did they use?