So one of our readers asked us this question the other day: Is it true that Hitler never visited a concentration camp? If so, why? Would a visit from Hitler be seen as unnecessary, not worthwhile, or impractical? Was there perhaps a sense of guilt he didn’t want to further? Was it just too out of the way?

We can say with certainty bordering the absolute that Hitler never visited one of the Concentration Camps.

As to why that is, the only answers that can be given here and that are supported by the evidence have to do with leadership style, the inner workings of Nazi Germany, and the purpose of such a visit. 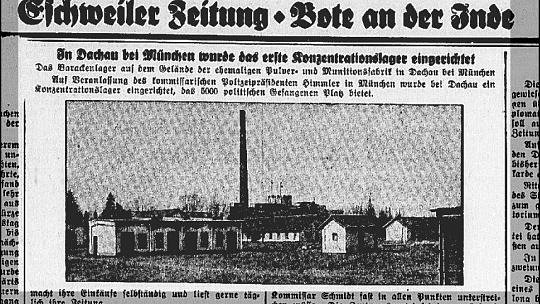 What I mean is, what possible reason could there be for Hitler to go to a camp? When the camps were first opened in the beginning of Nazi rule, there was extensive news coverage of this “new” method of getting rid of the enemies of the people. The above picture is a newspaper article from the Eschweiler Zeitung from 1933, that says: In Dachau near Munich, the first concentration camp was opened. So, it is not like these camps were particularly secret, especially in connection to imprisoning political enemies and people who had a bad reputation in German society in general, like the so-called “asocials”.

But the propagandistical value of a Hitler visit would have been – beyond this initial stage – not really there. While during the war, what happened to the Jews was in its broad strokes an open secret to the German public, it still was not exactly advertised since the Nazis were on the whole rather conscious of public opinion. The best example for this is the T4 killing program. Authorized by Hitler in October 1939 (backdated to September), the program of killing handicapped and mentally ill people in six centralized killing facilities became quickly well known in the German public. And they weren’t exactly on board with it, especially after the Catholic Church in Germany started preaching against it. The protest turned into one of the very few occasion during which Hitler was booed while giving a speech in Bavaria. Ultimately, the leadership of the Third Reich decided to scrap the program and instead continue the killing in a decentralized fashion further away from the eyes of the German public. (this also being the reason why the order for the Holocaust was later issued orally) 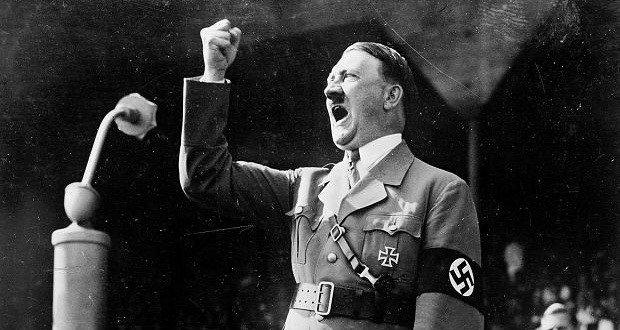 Some of this might also have to do with personality in the sense that according to pretty much all accounts, Hitler was really busy on the one hand but also really lazy on the other. At least until the later stages of the war, appearances in public were mostly for the purpose of giving speeches whipping up support etc., etc. Plus, Hitler hardly ever e.g. inspected Wehrmacht troops either, so why inspect a concentration camp?

In terms of style of leadership and the inner political workings of the Third Reich, it also would not have made particular sense. Franz Neumann of the Institute for Social Research and later the Frankfurt School describes the Nazi state as the Behemoth, a homage to Hobbes’ treaty about the Parliament of the long bench and Cromwell. What that means is coming from his understanding of the modern state, the Nazi dictatorship can be described as the anti-state. This is in the sense that rather than having clear cut functions and responsibilities, the Third Reich is infamous for agencies and institutions having the exact same areas of responsibility and policy, vying for control by acting in a way that they assume is in line with Hitler’s wishes. Hitler did intervene in these conflicts, yet was always careful that no side accumulated too much power. 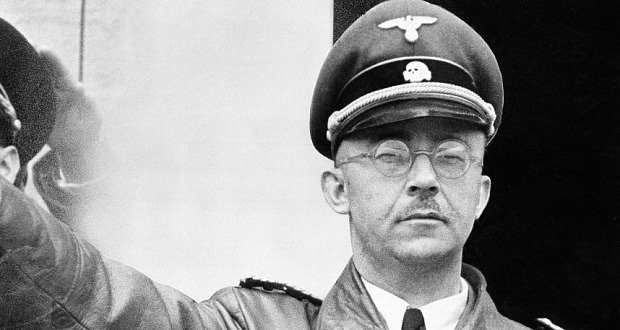 The Concentration Camps are known as Himmler’s fiefdom. This was not always the case but rather also the outcome of a process of control vying within the Reich. At some point in 1935/36 the total number of CC prisoners numbered around 3000 and – of course – the ministry of the interior and the ministry of justice pushed so that even those still in existence should be closed down because the normal prisons could handle the prisoners fine.

Similarly, after the whole CC system had expanded again and also turned into an important economic factor with regards to forced labor but also the SS-owned companies, there were different factions within the concentration camp system, generally divisible in the original Dachau School and the later Lichtenburg School. What this refers to is that pretty much all the later Concentration Camp commanders had started their career either in Dachau or in Lichtenberg.

A visit from Hitler in any of these situations would have been seen as a declaration of support for any potential group within these conflicts, something Hitler tended to avoid if not immediately necessary.

Similarly, and especially during the war when Hitler was very busy in terms of military planning etc., he did have Himmler, whom he trusted, who did the inspections of the Camps and informed him of what was going on. Himmler met Hitler often and usually updated him about the state of the Holocaust and of his visits to the camps, which he performed quite often.

Interestingly enough, Himmler’s visit to one of these execution sites lead to a pretty important change: In October 1941 Himmler visits an Einsatzgruppen mass shooting in Minsk. Upon being confronted with the gruesome work, his aides described that he was not feeling very well and went green. Seeing these executions, Himmler made it is his priority to make the killing more humane for the perpetrators and thus the idea of gassing on large scale was born. Using the concept of the Criminological Technical Institute, first gas vans and alter gas chambers were built in order to make it easier on those carrying out the executions.

So, in conclusion:The most likely factors why Hitler never visited a Concentration Camp are due to political and propagandistic considerations, because he was informed about what went on while at the same time being busy, and because he had his guy, Himmler, for that.