So one of our readers asked us this question the other day, Is there any way I can alter my driving behavior to help reduce traffic?

A recent one is this: yes, a single driver can maintain constant speed; wiping out the growing waves which propagate backwards through the chain. But sometimes this doesn’t work 100%. A better algorithm discovered in 2013 is to also monitor the driver directly behind your car, and to use your empty gap to speed up whenever the car behind you is approaching too fast. This tends to damp any large fluctuations commonly produced by an inattentive driver directly behind. Don’t be like a solid wall, instead be like a dashpot. Perform this trick at the same time as the known task of absorbing the waves coming from ahead. 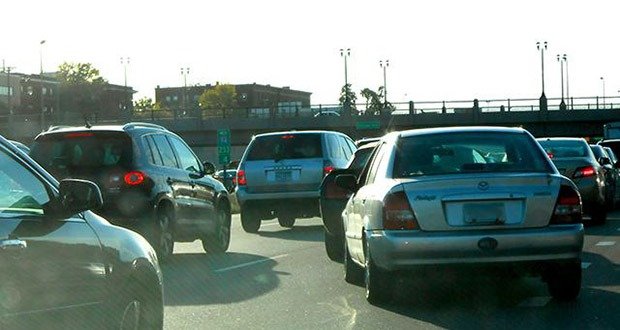 An older technique (long known to professional truckers) is to never close up your gap, never try to “block cheaters” or “punish interlopers” or any of that stuff. Instead, always encourage free merging. Try to get people to jump into the gap ahead of you. And, if a huge backup appears in one lane, the proper thing to do is to use the empty lane, and to merge in one place only: at the last minute. (Or, if you must merge early, then maintain a large gap in the through-lane, making late-merging possible.) Traffic often behaves like merging gear-teeth, and to keep the gears spinning requires empty spaces. The modern term for this is “do the zipper.” Several state DOTs have started publicity campaigns about Zipper Merging.

Here’s another from traffic physics: the optimum algorithms for highway driving are very different than those for in-city driving where traffic lights are present. For example, when we’re down in the city-grid, if we maintain large gaps, then the next red light will block our progress. Or worse, we’ll be pushing a whole column of traffic back into a red light; traffic which could have made it through. In the city-grid, a certain amount of tailgating is required, and big gaps may greatly reduce the flow. But on highways without red lights, it all works backwards. Without the traffic signals to pace the flow, large jams can spontaneously arise from nothing. The jams require an environment of aggressive tailgating before they can form. These jams can be partially thwarted by “anti-tailgaters,” by drivers who maintain large forward gaps, and who drive at constant speed in order to prevent fluctuations from growing. Also, the large gaps will promote “zipper” or “gear teeth” rapid driving through merge-zones.

A less cutting-edge driving technique involves psychology. Observe congested traffic accurately, and eliminate all the myths and emotional bias which distorts our perceptions as drivers. A big one is this: each car on the road is actually a delay of only 1-2 seconds. It’s nothing like a line at the grocery cash register. If a car merges into your gap, will you be late to work? What if ten cars jump in ahead of you, O the Humanity! 🙂 Nope, even if 60 cars get ahead, that only delays you by a minute or two. Such a small a delay is insignificant for most commutes. It’s down in the noise, a tiny fluctuation. Compared to a line at the grocery checkout, one shopping cart equals 50 to 200 cars ahead of you on the highway. But it doesn’t feel that way! We all seem to be trapped in a delusional time-warp during commutes. 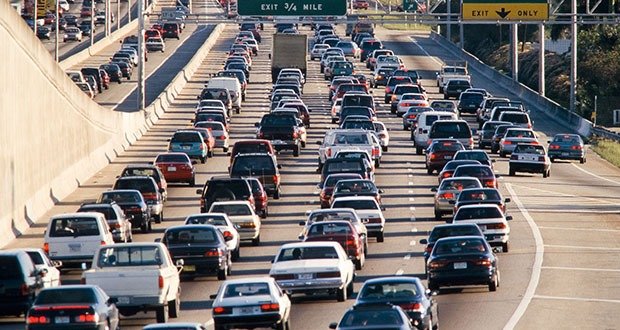 If we aggressively pass three other cars during congestion, it feels as if we’re shortening our commute-time. Wrong, because if we want to genuinely shorten our commute, we’d have to drive a few MPH faster than average. Our position in line means nothing, when compared to actually driving faster. For example, on a half-hour commute, if we could drive 2MPH faster than everyone else, we’d have passed an entire mile worth of cars in the chain. So, if you fight like fury and manage to pass ten other drivers, twenty other drivers …that’s nothing. Instead you could have set your alarm clock 1 minute earlier in the morning, which puts you ahead by roughly sixty cars.

Or, here’s another way to view this: if you walk onto the subway, or on a bus, should you try rushing to the front? Elbow everyone aside, knock down kids and old ladies? After all, each passenger ahead of you at the bus door might cause an entire second of delay. Yet when riding on the bus, there’s no delusional time-warp. We don’t usually have several other passengers viciously fighting for the seat closest to the front. If someone ever does shoulder their way to the front of the vehicle while crowing about how skilled and superior they are at bus-riding, the driver will stop the bus and call for the men in white coats! So if you wouldn’t do it on the bus, don’t do it while highway commuting. When you’re in rush hour, you’re not in a road race. Instead, admit to the fact that you’re “trapped on a bus,” and if you take your seat and stop fighting with other commuters, then like magic the whole bus goes much faster.

AskUs: If I were to drop an object, a bowling ball, down an infinitely long vacuum tube, what speed could it reach?