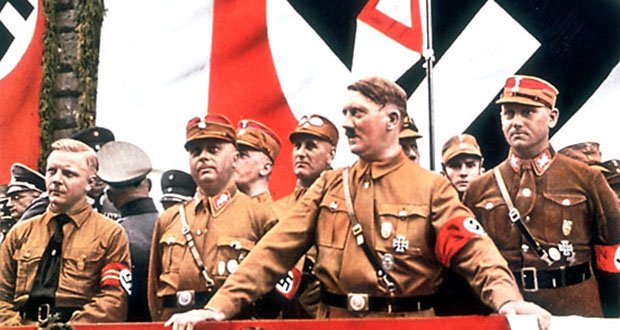 So one of our readers asked us this question the other day: To what extent was the Nazi Party actually socialist?

Nazism is hard to classify as a concrete ideology because so many of its tenets and practices are paradoxical, this being one. Originally, there was an actual national-socialist wing in the Nazi party under the Strasser brothers who wanted a German Nationalist socialism, but after the Night of Long knives (when they were purged) that element survived only in the name of the party. The Strasserites were the closest thing in the Nazi party to actual socialism; they wanted socialism, but only for the German people, and they were still virulently opposed to communism.

Other than that, the “socialist” aspect of National Socialism was merely a political tool used by Hitler and Goebbels to mobilize the working classes to support them; while they condemned communism to get support from the middle class, they also condemned bourgeois democracy to get support from the workers. Hitler’s own ideas on his version of socialism were incredibly vague, saying something along the lines of “I believe a socialist is one who loves Germany with his heart” (terrible misquote, but I’ve misplaced my copy of “Rise and Fall of the Third Reich” at the moment).

I believe his creation of limited working class welfare had more in common with Bismarck’s strategy of cutting support for revolutionary movements than sincere socialistic ideology. Part of the reason unemployment amongst German workers fell is because the Nazis banned women from the workplace, giving their jobs to men; aside from that, the conditions of the working class generally deteriorated during Nazi rule. Independent trade unions were banned and replaced with the German Labour Front, who in true corporatist fashion served more as an intermediary on the side of the bosses than a workers’ organization. By the late 1930s, wages actually dropped, and the cost of living rose by something like 25%.

Basically, Hitler never threatened the machinations of capitalism in Europe like legitimate socialist ideology did. While the regime targeted Jewish shop owners etc., their German compatriots often profited from their removal. Later on, slave labor from concentration camps was used in privately owned factories and on privately owned land. Fascism was a political force based on middle-class opposition to communism, while revolutionary socialism was an ideology aimed at destroying or directing capitalism to the benefit of the working class. Fascists used leftist terminology and methods with one hand to try and gain proletarian support while crushing genuine leftists with the other.

AskUs: Why are big companies seemingly in a constant battle against DDoS attacks?

AskUs: Why did the Native Americans not experience the same technological advancements as Europe?