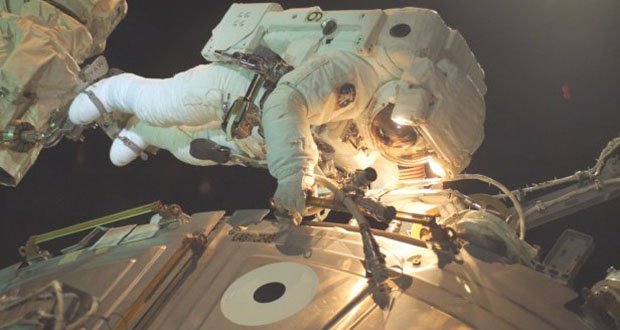 It is called cold welding or vacuum welding. Richard Feynman explains it as such: “The reason for this unexpected behavior is that when the atoms in contact are all of the same kind, there is no way for the atoms to “know” that they are in different pieces of copper. When there are other atoms, in the oxides and greases and more complicated thin surface layers of contaminants in between, the atoms “know” when they are not on the same part.”

What’s really neat is that you can even watch this process happen in real time. For example when you take two small crystalline chunks of a metal and you put them together, when they touch in the right geometry, they will simply snap together to form one solid crystal, as shown in this video for two nanowires. As Feynman so nicely put it, from that point on as far as the electrons are concerned they only see one continuous network of atoms (the lattice) that they can zig-zag through.

The trick to getting this welding to work is just that you need very clean and well-defined surfaces so that the atoms on the surface of each bit of metal can come into contact with each other. On Earth we can get there by using a high vacuum, as shown in the video. Doing the same thing in space is even easier since you automatically get an ultrahigh vacuum without even trying.

It’s actually a problem in space. The Galileo space probe that was sent to study Jupiter and its moons encountered a problem. Its primary array failed to deploy because it cold welded together once it was in the vacuum. The mission was completed using the low-gain antenna at a lower data-transfer rate.

The lack of oxides (and other contaminants) is key here. Most people don’t think about it but pretty much every metal always has a layer of oxides on the outside on Earth. So in order to use vacuum welding, the metal needs to be cleaned to provide a pure surface prior to welding. It’s an exciting possibility for future space manufacture but is impractical on Earth right now except for very specific needs.

10 Exciting Things That Might Be Possible In The Future

AskUs: Are photons emitted by fire the same as those emitted by a bulb or an LED?

July 7, 2016
Latest Posts
Subscribe to Blog via Email
Did you know?
Loading...
Facts of the Day
Registration is disabled.