So one of our readers asked us this question the other day: Out of the 4 branches of the military, why does Navy get portrayed as “Gay” in movies and just in general as a joke? 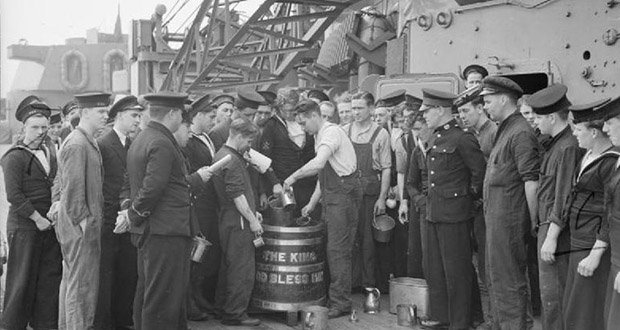 It pre-dates the United States and was present in the English Royal Navy as well. The actually reason is very simple. Sailors were sometimes, and more often reputed, to be prison gay. That is they were removed from an environment with large numbers of women for months, sometimes years, at a time and turned to alternative sexual practices. A captain or officer might have a wife aboard a ship but everyone else was pretty much on their own (you can find these women by looking at the quartermasters records and seeing who was drawing double rations).

Sodomy if found out was generally punishable with flogging or death.

I don’t know too many books/articles on this topic exclusively but it is touched on in a number of books on the larger topic of sailors lives. Rediker touches on it in Between the Devil and the Deep Blue Sea. Joe Flatman definitely addresses it in Cultural biographies, cognitive landscapes and dirty old bits of boat:‘theory’ in maritime archaeology. Brian Lavery probably addresses it in Royal Tars. This thesis is also a place I would start looking “Well content with one fireship” : the sociomedical impact of venereal disease on the Channel Fleet, 1793-1815

There is one account in the Blue Fleet. One man (Philip Francis) was so drunk that a second man (John Benson) raped him in his sleep. During the court-marshal the officers who found them refer to it as a “very horrid thing committed during the night”, and the majority of the records go into discovering if there was connection between two men. Eventually, it is decided that there was connection, between both men. They also come to the conclusion that being too drunk to stop yourself from being raped by another man is not an appropriate defense for a member of the Royal Navy (at best it’s a dereliction of duty).

So how common was homosexuality? Note that the terms “buggery” or “sodomy” tended to be used as the name of the crime – at the time, homosexual sex was considered an act and a crime as opposed to part of a broader homosexual identity, which most people in western societies generally see it today. The gist is that we can’t say with any certainty. When there were reports of it, they were usually associated with strict punishment, and thus we can’t know how many incidences went unpunished (an unrecorded). It was also difficult to prove, and thus charges tended to be made for lesser crimes – indecent behavior, indecent liberties, or uncleanliness. Over the span of 1756-1806, there were more capital sentences for buggery in the navy than for murder, and 1/5 of the acquittals.

These days the myth is most strongly associated with submariners. The US Navy just started allowing female sub officers. But for the most part it is all male and they are out to sea for months at a time.

AskUs: What lies beyond the edge of the observable universe?

AskUs: During Cold War, between CIA and KGB who did a better job of infiltrating their opponent?