So one of our readers asked us this question the other day. How did Hitler get the idea that there was a massive Jewish conspiracy in the world? What kept Jews from “Blending In” during WWII? It seems to me that persecuting Jews was something the Nazis really believed in and that it was not entirely opportunistic scapegoating. Holocaust was supposed to remain a secret so it was not for propaganda, not to mention that killing off potential slaves is a terrible policy even for a completely amoral movement. Now, it is also obvious that a global Jewish conspiracy doesn’t in fact exist. What made Hitler and the others believe that it did exist?

There are a number of issues for Jews just “blending in”, which broadly speaking worked differently in Eastern and Western Europe.

In Western Europe, maltreatment of Jews was mostly incremental. The Nazis didn’t start mass murdering people right out of the gate (though it was clear that things were going to get bad for the Jews, and people did openly speak in the ’30s of the possibility of Jews being killed en masse, albeit not on the scale it actually occurred). First, citizenship was revoked, certain rights were rolled back, Jews were de-integrated from society, etc. Eventually you got things like the famous yellow stars. The penalties for pretending not to be Jewish were pretty steep, and being killed for being Jewish wasn’t an immediate threat. Additionally, records were used over time to make it difficult to hide Jewish lineage. While Jews “passing” would’ve been relatively easy in Germany, the environment pre-war made it an unlikely choice. 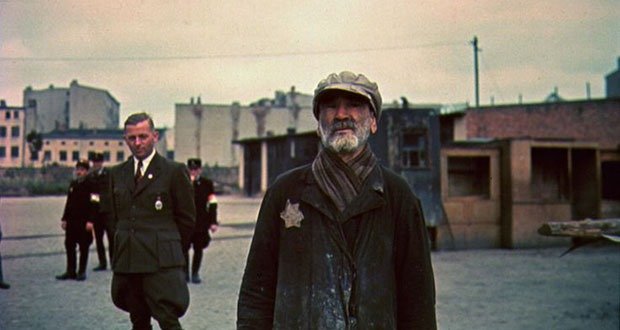 In Eastern Europe, the Germans essentially rolled in followed by killing squads and created ghettos in cities. However, there were a couple of issues. First, you did have some of the same effect as in Western Europe, where people feared the Germans finding them unregistered more than they feared what’d happen if they didn’t. Creating ghettos and killing everybody wasn’t announced. 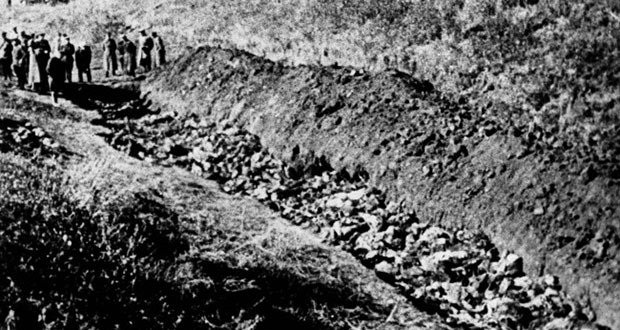 In Kiev, for instance, Jews were told that they had to assemble with their possessions for resettlement a few days after the occupation began–anyone violating the order would be shot. But upon their arrival, they were all shot in a ravine at Babi Yar–only a few who managed to slip away survived. While some Jews might’ve feared what would happen, the prospect of being hunted down was present, and culturally speaking restrictions on Jewish residence in Europe wasn’t exactly a new phenomenon.

Additionally, in Eastern Europe much more than western, Jews weren’t very integrated. It’d be a dead giveaway if someone could only speak Yiddish (which would’ve happened in rural areas, though most people could probably converse in the local language) or couldn’t find non-Jews to vouch for them or couldn’t document a name that wasn’t Jewish.

In all these cases, the penalty for trying to “pass” was death, and the Nazis had whatever historical records were available to hunt down those who tried.

However, some people did. While it was difficult to do it, among the millions of Jews some were bound to try it, and some succeeded. I know a woman (this anecdote is illustrative, not a source) who survived the war as a girl in a Belgian orphanage. It was assured that there was no documentation tying her to being Jewish, and by all appearances she was just a young girl who was abandoned. 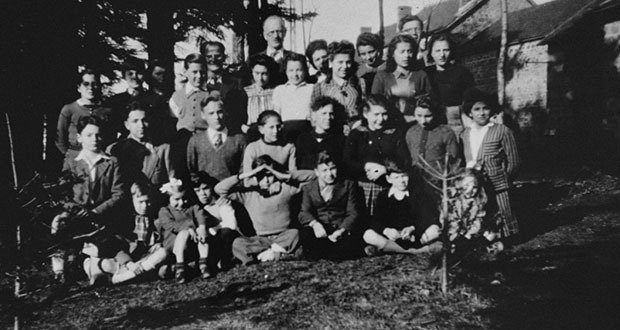 A better-known example is the French village of Le Chambon-sur-Lignon, which sheltered thousands of French Jews (and others escaping Nazi persecution). Note that France had an integrated Jewish community (so people could “pass”) and didn’t have the incremental persecution increases in Germany, so there was more incentive to try to avoid the Germans figuring out you were Jewish at all. It required a organized effort, and lots of forged documents–if you mysteriously had no record of birth in the local church, the Nazis wouldn’t just shrug and move on.

So in short, you’d have to decide way in advance to pass in Germany, and it’d be difficult to in Eastern Europe. In either case, the incentive to hide being Jewish wasn’t immediately apparent, but the risks of it were. 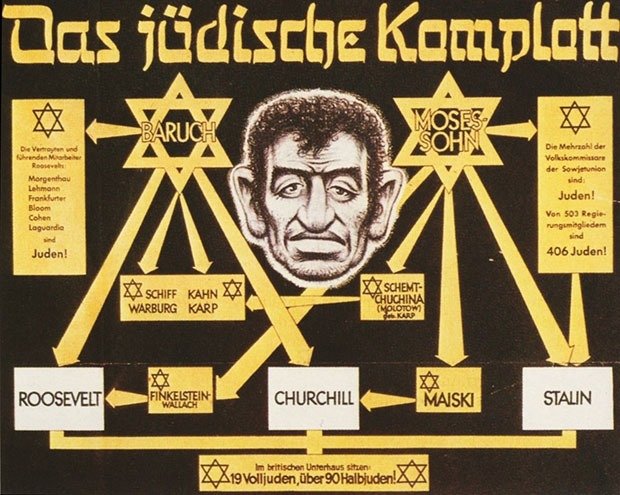 Now coming to your second part of the question, How did Hitler get the idea that there was a massive Jewish conspiracy in the world?

This is a huge question about which there have been virtually whole libraries full of books been written. In the following I’ll try to give a somewhat simplified and condensed run-down of the “Jewish Conspiracy” trope.

To completely understand this one, we actually need to start with modernity itself. The Enlightenment and the onslaught of modernity following its earlier thinkers but especially the French Revolution had a profound impact on the thinking of the 19th century. With God being out of the game as the factor upon which the course of history and the legitimacy of power could be rested, discursive pressure formed to find new explanations for why the world was the way it was, why the people in it were different from each other, and what gave political power and order its legitimacy.

To solve this conundrum, various people formulated different answers. One you might be familiar with was Marxism, in the sense that Marx posed that the underlying force of history was class conflict and the legitimacy of power ultimately derived from the ownership of the means of production (simplified version here). But another and for this question very pertinent answer was also found in Social Darwinism. Social Darwinism wants to apply the concepts of survival of the fittest and natural selection to society and politics. In the age of the rise of nationalism, which saw nations resp. the according races as the actors in the historical process (like Marx viewed classes), the theory of Social Darwinism was combined with the theory of races as the historical actors and created what in essence became the völkisch ideology. 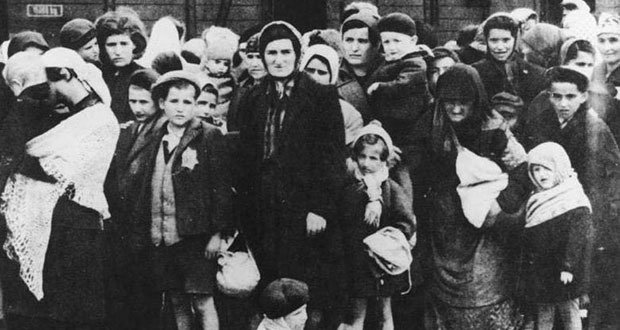 Now where do the Jews fit into and what does this have to do with some sort of alleged conspiracy, you might be asking. Well, in the tradition of völkisch thought as formulated by thinkers such as Gobineau and Houston Steward Chamberlain races as the main historical actors were seen as acting through the nation, the latter being basically their tool or outlet to compete in Social Darwinist competition between them. The Jews thought of as a race had no nation – seen as their own race, which dates back to them being imperial subject and older stereotypes of them as “the other” – but were a “race” that acted internationally rather than nationally. In order to be able to compete within the racial conflict them having no nation were seen as acting in a conspiratorial manner. Chamberlain e.g. made them out to be the controlling parasites behind political action and order that was seen as anti-national such as the Catholic Church or the Habsburg Empire. The anti-Semitism that formed here in the later stages of the 19th century is in effect a ideology of conspiracy, alleging a Jewish conspiracy in order to weaken their racial competitors. 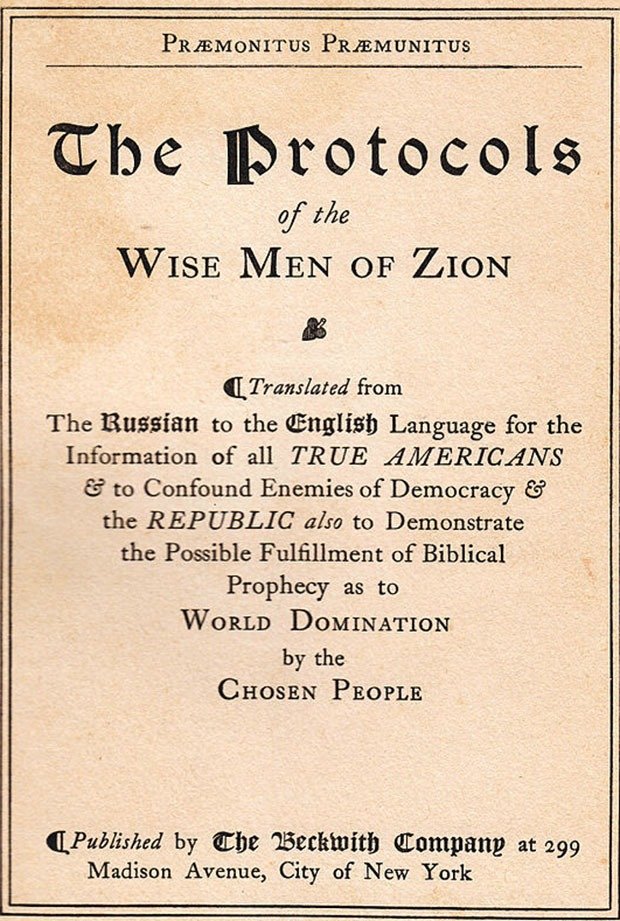 The clearest example of such a way of thinking can be found in the Protocols of the Elders of Zion, a political treatise produced by the Tsarist Secret Police at some point in 1904/05 that alleges to be the minutes of a meeting of the leaders of the Jewish world conspiracy where they discuss their plans to get rid of all the world’s nations and take over the world. Despite these protocols being debunked as a forgery really quick, they had a huge impact on many anti-Semitic and völkisch thinkers in Europe, not at least for some in the Habsburg empire such as Jörg Lanz von Liebenfels and others which were most likely read by the young Hitler.

The whole trope of the Jewish conspiracy as formulated by völkisch thought took on a whole new importance with the end of WWI, the Bolshevik revolution, and the subsequent attempts at revolution in Germany and elsewhere.

The defeat of the Central powers were seen by many of its soldiers and ardent supporters not as a military defeat but as a “stab in the back.” The way the war ended in Germany with revolts of soldiers and the deposition of the monarchy by Social Democrats was the foundation for this myth that in essence revolved around Germany not being defeated by the Entente but by the enemies within. The trope of the enemy within being Jews and leftists had been brewing for a long time (see the Jew count of the German army in 1916/17) but really came to the forefront with the defeat. What followed compounded this further. The violence of revolution and counter-revolution as well as the treaty of Versailles lead to many völkisch inclined thinkers and political actors believing that Germany’s defeat and the subsequent peace terms could only be explained by a concerted act of the Jewish conspiracy leading to internal enemies stabbing Germany in the back, threatening the very German way of life through Bolshevism and preparing the Jewish-Bolshevik takeover of Germany by making it defenseless through the Versailles treaty.

Democracy seen as faulty and antithetical to the German racial character and communism as an essential anti-national movement were both shunned by these völkisch ideologues and explained through a concerted effort by a conspiracy of the anti-national “race”, the Jews. This was the very core idea of völkisch thought and of Nazi Weltanschauung. In the end, for Hitler and many of his followers it was the only way to explain the state of the world because it hinged on this Social Darwinist, ultra-nationalist view of history being a history of races competing for power and supremacy.