So one of our readers asked us this question. when did the USA go from a Nation with a deep distrust for a standing army, to having one of the largest and most expensive on earth?

The answer lies in President Harry Truman’s second term. Take a look at the chart below of military spending to see what I mean. You can also look at this more detailed explanation (PDF) of outlays and military manpower by the U.S. Census between 1945 and 1973. What you’ll see is an enormous dip after 1945. In absolute terms, it was the largest demobilization of military manpower in American history (proportionally, the American Civil War demobilization was larger). Why, then, did it increase? 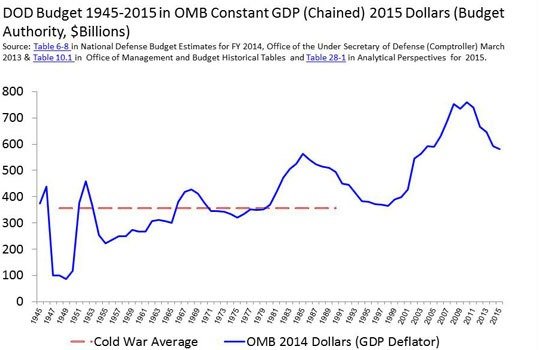 There are three principal reasons: One is political, the second is military, and the third is technological. Let’s begin with the political. 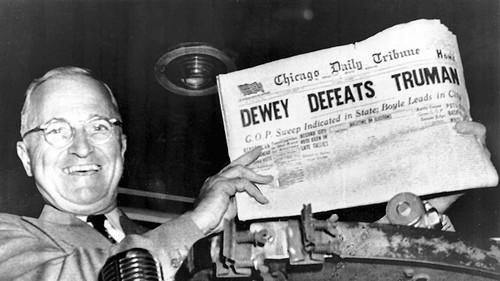 The 1948 U.S. Presidential race pitted Harry Truman, Democratic successor to Franklin Roosevelt, against Thomas Dewey, a Republican from New York. Today, Dewey is known mostly for the appearance of his name on the front page of a newspaper held by Harry Truman. In 1948, however, Dewey was a serious figure with serious aspirations to become president.

Dewey was an immensely popular governor, and he seemed to be a shoe-in for president. Truman was poorly thought of in large portions of the country ─ so much so that Strom Thurmond would split the Democratic ticket by running as a “Dixiecrat” in the South. With his victory seemingly assured, Dewey didn’t run a very enthusiastic campaign. He came across as stilted and inoffensive, bland and vanilla. Truman, on the other hand, was an enthusiastic and energetic campaigner, something that would prove to be the deciding factor in the race.

The pair were also divided ideologically. Truman was the inheritor of the Rooseveltian internationalist platform. He believed that the United States had a duty to intervene around the world where Democracy was threatened. He supported the plan put forward by Secretary of State George C. Marshall to spend billions of dollars on aid to Europe. The Marshall Plan, as it came to be known, was passed by Congress and signed by Truman in the first half of 1948.

Similarly, Truman supported anticommunist forces in the Greek and Chinese civil wars, and he put diplomatic pressure behind anticolonial movements around the world. Conversely, the Republican platform in 1948 favored less intervention overseas and greater focus on domestic issues. While Dewey, from New York, was definitely on the liberal wing of the Republican Party of the time (he supported expanded Social Security and the first steps toward national health care), he had to keep the support of men such as Sen. Robert Taft of Ohio, the leader of the conservative Republicans. Dropped into today’s political scene, Taft would be considered more a libertarian ─ he favored rolling back many New Deal programs, cutting taxes, and cutting the military. In 1951, Taft’s book, A Foreign Policy for Americans stated:

Force should not be called for against any nation because of any internal domestic policy, except rearmament in excess of a quota imposed or agreed to. Interference in domestic policies, even such vital matters as tariffs or the treatment of minorities, would be more likely to make war than to prevent it. The test is: is the subject one on which the people of the United States would be willing to have other nations interfere with our internal actions? If not, we should not attempt to impose such interference on others.

What Dewey would have done as president internationally is a what-if question we’ll never know the answer to. Nevertheless, we can say with certainty that Truman, who believed in international intervention, was much more likely to increase military spending than Dewey was. 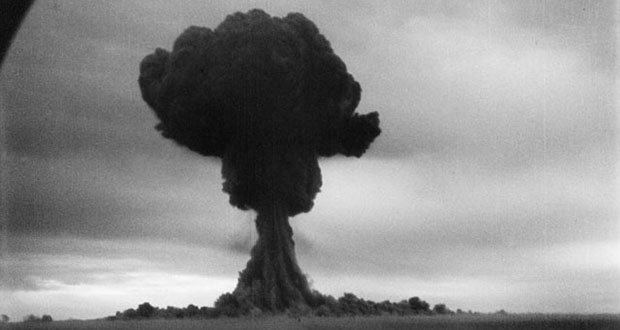 Militarily, Truman’s second term was an eventful one, and this may be the key factor in American military expansion. On Aug. 29, 1949, the Soviet Union tested its first atomic explosive. Ten months later, North Korea ─ with the support of the Soviet Union ─ invaded South Korea to begin the Korean War. In both instances, the United States was grossly unprepared for events.

Contemporary experts thought the Soviet Union was years away from detonating its first atomic weapon. When it happened in 1949, it was abrupt, sudden, and terrifying from the American point of view. Between 1945 and 1949, the defense of the United States had rested on the principle that the American atomic monopoly could and would balance out any disparity in conventional arms. The atomic bomb was the great equalizer, it was thought, and so the United States did not need large numbers of conventional arms or enlisted soldiers to fight on a traditional battlefield. The twin detonations of Hiroshima and Nagasaki, coming shortly before the Japanese surrender, in hindsight created a myth about the atomic bomb: It was so terrible that any enemy could not continue fighting against it.

When the Soviet Union detonated its weapon (and that weapon’s existence was exposed by air-sampling aircraft from Alaska), that theorized equalizer was gone. 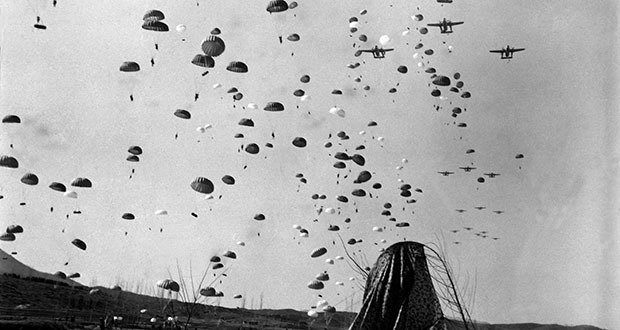 When the Korean War began, it seemed to prove to Americans that not only was the equalizer gone, but the Soviet Union was willing to exploit the situation. American soldiers, rushed to Korea to stop the invasion, were outnumbered, outgunned and totally overwhelmed. In one example, American soldiers found their 2.75” WWII-era bazookas unable to penetrate the front glacis of North Korean tanks. America rushed to rearm and redeploy, even going so far as to remove tanks from static display in front of National Guard armories and send them to Korea. 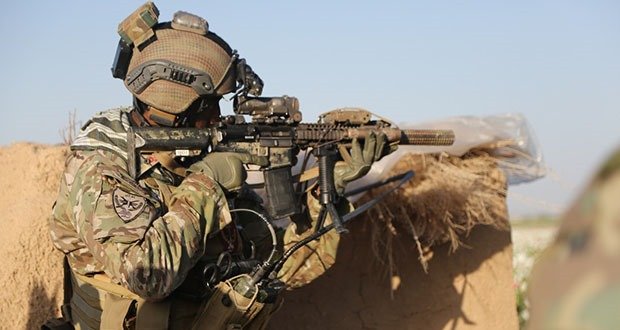 This leads into the third issue: Technology. If you look at those Census charts way back at the start of this comment, you’ll see that although there’s a surge in military manpower after 1950, it never reaches WWII levels. Spending, however, skyrockets. Since the end of World War II, the United States has embraced a philosophy of technological superiority rather than numerical superiority. Rather than deploy large numbers of soldiers to the battlefield, the U.S. military has chosen to deploy fewer numbers of well-trained and well-equipped fighters.

This has a cost, of course. Newer material always costs more, and research and development costs are highest at the leading edge of technology. With the world’s largest economy, the United States is able to support this military spending, and even though it is large in absolute figures, it has tended to be relatively small in terms of gross domestic product. The U.S. economy is so large that even though the U.S. is far and away the largest military spender in absolute terms, its 3.5 percent share of GDP is today tied for the 20th largest in the world.

10 Unethical Things You Can Legally Buy