So one of our readers asked us this question the other day. In US History, we learned about Manifest Destiny. Why wouldn’t the United States go on to conquer other nations/negotiate cessions after Hawaii and Alaska and the U.S. territories? Especially once we became a superpower in the world, what stopped us from taking other countries? Why was Manifest Destiny limited to continental North America, but not the entire world?

Oh, we did take other countries, and Manifest Destiny was definitely used to justify overseas expansion as well, but only into the early 1900s. A famous quote from Teddy Roosevelt extending it past the coastline, “it is manifest destiny for a nation to own the islands which border its shores.”

Alaska was purchased in 1867, and Hawaii was annexed in 1898— but it was not the only territory we took. After defeating the Spanish in the Spanish American War, the US also annexed Guam and Puerto Rico and bought the Philippines for $20 million, in the Treaty of Paris. Immediately afterwards, the Philippine-American war was fought to keep them from gaining independence, which the US didn’t recognize until 1946, after WWII. American propaganda depicted Filipinos as either uneducated children, in need of wholesome American guidance, or as savages to be killed. Here’s a nice article overview of the Philippine-American war, it was truly awful. Cuba was also temporarily occupied by the US, but was granted limited independence in 1902. 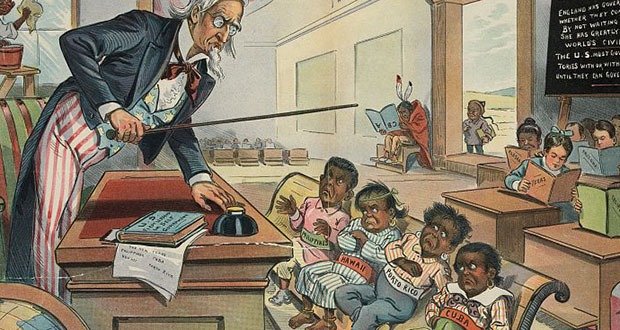 Here is a relevant (racist) political cartoon from 1899, showing Uncle Sam as a teacher of self-governance. View Higher Resolution Image Here. You can see that the states added in the mid-1800s are reading quietly, while the new class of Philippines, Hawaii, Puerto Rico and Cuba sit unhappily in the front row. And a Native American kid is off in the corner not knowing that his book of ABCs is upside down, a Chinese kid is waiting to be let in, and a black kid looks on while washing windows. 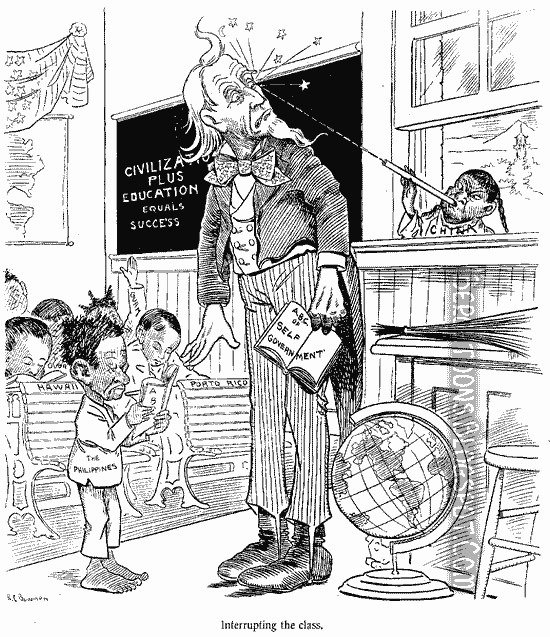 Here a very similar cartoon that shows China leaning in the window to shoot spitballs at Uncle Sam, as he tries to teach Guam, the Philippines, Puerto Rico and Hawaii. A major stated motivation for the expansion into these territories was the ‘civilizing’ of the native populations. 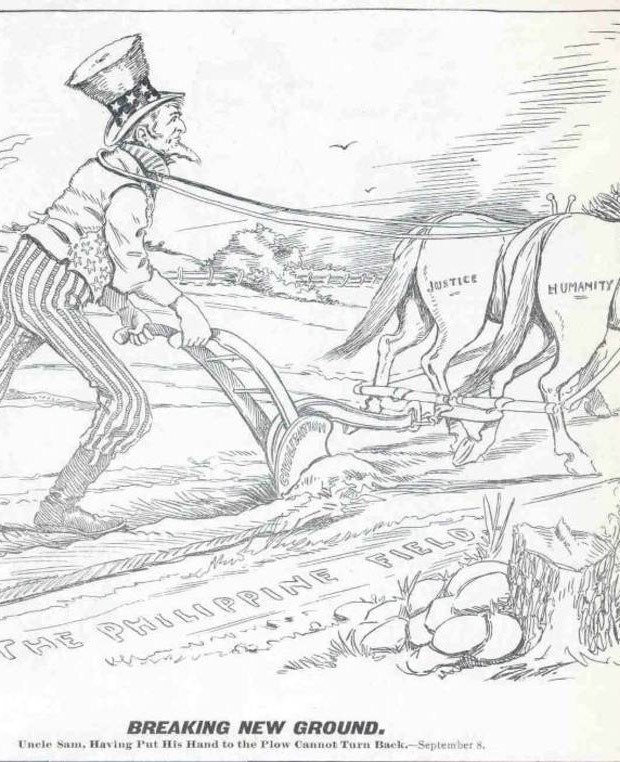 Here is another political cartoon showing Uncle Sam is forced to give the Philippines the plow of civilization by the horses of Justice and Humanity. 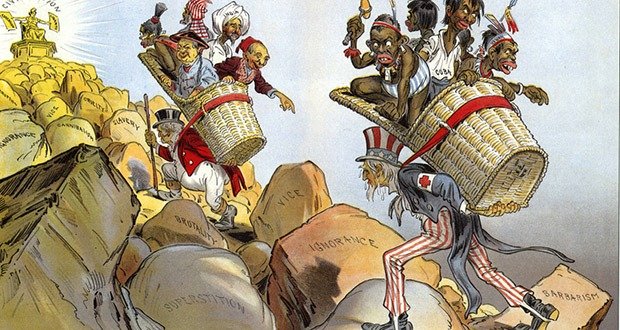 Here is another political cartoon showing Britain and the US carrying their respective territories on their backs from barbarism and superstition towards education and liberty, and the US’ are the Philippines, Puerto Rico, Cuba, Samoa (annexed 1899), and Hawaii. If you’ve ever heard of Kipling’s “the white man’s burden,” this was it. It was seen by some as a moral obligation, though others saw it as an unwanted burden. At this time, Hawaii wasn’t seen as any different from these other territories, no more likely to become a state.

USA purchased the Danish Virgin Islands (now the American Virgin Islands) in 1917 and planned to purchase Greenland in 1946 due to its geography.

What has been described above doesn’t really paint the whole picture though. About 10 years ago, Eric Love published a book called Race over Empire that argues that American imperialism was conducted despite racism, not because of it, and that racist attitudes worked against American expansionism. The idea of “white supremacy” and “white man’s burden” is the traditional view, but if you look at the arguments and rhetoric of the time, you get a different picture. 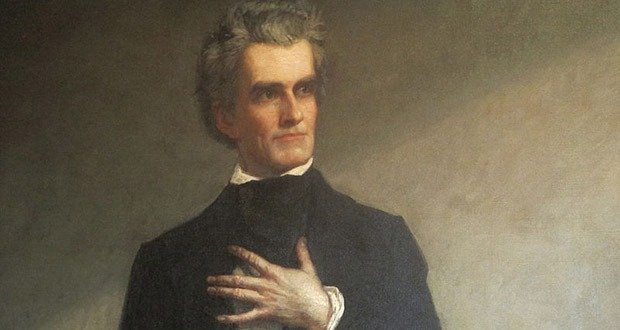 In any event, I find Love’s argument persuasive: That some of the biggest opponents of 19th century American imperialism were racists. Look back at the Mexican-American war, for example. Sen. John C. Calhoun, a virulent racist if there ever was one, loved the idea of annexing Texas (which had a significant white population) and the northern two-fifths of Mexico, but he objected to plans to annex portions of Mexico farther south because its population would be “subversive to our free and popular institutions,” he said in a speech.

Calhoun was fine with incorporating white-owned (or dominated) territory into the United States, and he was fine with incorporating territory containing American Indians, because their populations were thin on the ground and ─ perhaps most importantly ─ they were not citizens. Annexing significant portions of Mexico would bring Mexican citizens into the United States, and the U.S. could not simply abrogate Mexican citizenship without severe international consequences. (It was done on a small scale, anyway). 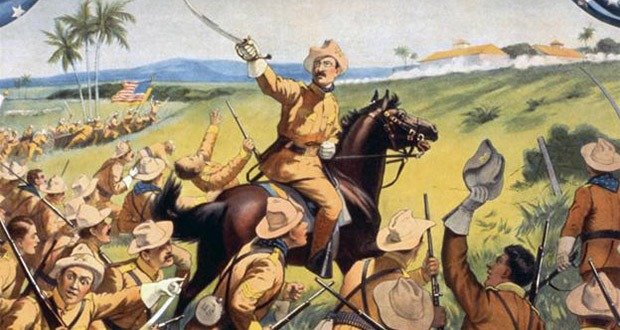 In the Spanish-American War, you see the United States seizing Spanish possessions but never considering incorporating them as states ─ again because of that anxiety about nonwhite citizens. If you believe the “white man’s burden argument,” it would have made perfect sense to annex Cuba and incorporate it as a state. The United States did not, because of that dread of nonwhite citizens. President Grant, after the American Civil War, made secret plans to annex the Dominican Republic (Santo Domingo at the time), but was defeated by legislative resistance. In his Personal Memoirs, Grant wrote that he sought annexation to save the United States from a race war by giving black Americans a place to emigrate to.

American territorial expansion was not driven by racism. Rather, it was retarded by racism. Far better, contemporary Americans argued, for these failed states (as they were seen) to be allowed to fail on their own than to have the United States dragged down with them. 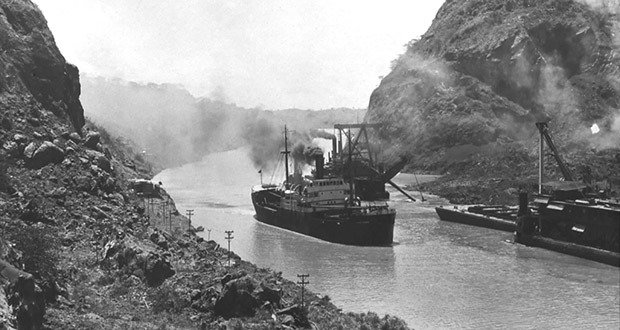 Another US territory story: When the government of Colombia refused to let the US build a canal through it in 1903, the US created/backed a revolution that lead to the creation of the country of Panama, and the Panama Canal Zone was officially US territory from 1903-1979.

20th century saw independence or revolutionary movements in basically every colonized country globally, including those territories taken at the end of the 19th century. Some movements failed (there were revolts in Puerto Rico in the ’50s, but of course it remains US territory today), but as all major European powers decolonized, the US changed its approach to foreign policy. After WWI, the US became strongly isolationist, no longer interested in overseas wars. Of course in WWII Japan would occupy the US’ many Pacific Territories, and the US fought to reclaim them, but by the beginnings of the Cold War, the rhetoric of Manifest Destiny was long gone. Intervention in foreign affairs with the goal of propping up anti-communist governments was the plan, no longer adding territory or civilizing people.