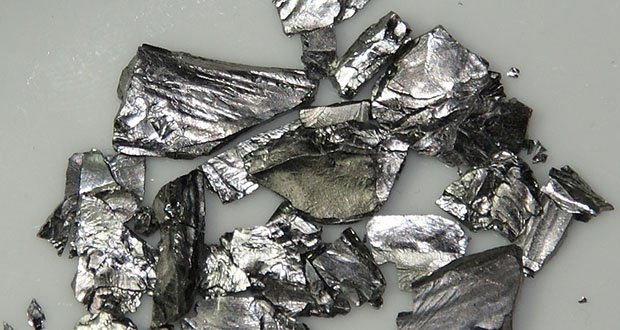 So one of our readers asked us this question the other day: Why is Californium priced so high and what exactly does it do for us?

Californium is used as a neutron source – one microgram (µg) of californium-252 emits 2.3 million neutrons per second. This is useful for starting up nuclear reactors.

It’s also used in Neutron Radiography, which is kind of like an X-ray. Because it interacts with the relatively tiny nucleus of atoms, rather than the much larger electron shells, it can penetrate deeply, even into dense materials. This is useful for analyzing things too dense to X-ray, like metal or rock. It’s often used for checking aerospace components for hidden flaws, for example. For a neutron radiography movie of a running motor, see for example this video. X-rays could not image the interior of a motor because the metal absorbs virtually all X-rays. The neutrons were created not from Californium but from a spallation source (= particle accelerator pointed at a heavy metal target).

It’s sometimes used as a radiation source to kill cancer cells. It is used for oil well logging – petroleum engineers can use neutron sources to find oil deposits because the hydrogen in oil reflects neutrons more than solid rock.

It’s also used in nuclear security research and detector calibration – Cf-252 can be used to mimic the neutron signal produced by Plutonium-240 in spent nuclear fuel that someone might be trying to steal, so safeguards scientists use Cf-252 sources to calibrate their instruments and avoid the politics of procuring plutonium samples.

It’s also used in heavy element production. Heavy isotopes like Californium, Berkelium, and Einsteinium are often used as targets to bombard with particles and create even heavier elements. In fact, element 117 was recently named “Tennessine” in honor of the heavy element supplied by ORNL in Tennessee.

So why is it expensive? Well, you have to start with Curium, which is processed out of spent nuclear fuel rods. You get about 20 grams out of a ton of spent fuel. Then, you take the curium and put it in a special nuclear reactor designed to bombard it with neutrons and alpha particles. After leaving it like that for a long time, you need to separate out the Californium 252 (the useful isotope) from the other 20 stable isotopes and other transplutonium elements. Only two places in the world even do this—Oak Ridge National Laboratory in the United States and the Research Institute of Atomic Reactors in Russia. Oak Ridge is able to produce about half a gram annually and due to the half-life of only 2.646 years (that’s 2 and a half years, not two thousand six hundred), the world supply decreases very quickly.

The 9 Types Of Intelligence You Should Know (Infographic)

AskUs: Given enough time would another animal eventually evolve to become as intelligent as us?