So one of our readers asked us this really specific question the other day, Why it’s almost impossible to rescue someone who’s fallen overboard from a cruise ship? Couldn’t another passenger immediately grab two lifebuoys and jump in after him? Then both would be alive and easy to find the next morning. What am I not considering? Sorry for this really specific question, but it got me thinking after watching this gif of a man falling from a cruise ship.

The sea behaves in weird and counterintuitive ways. That’s what makes it so fatal. 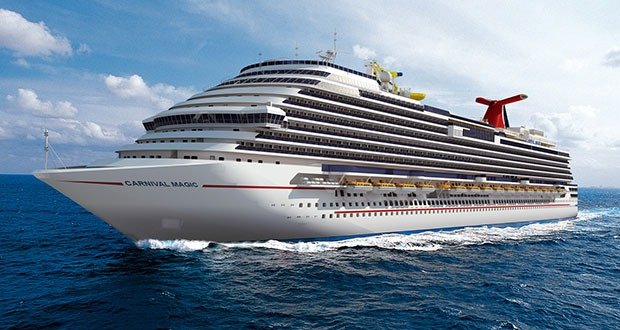 Firstly, there’s height. Hitting water at a certain speed is “like hitting concrete”, which is for example why jumping off the Golden Gate Bridge is fatal. Modern cruise ships are so large that you’re likely to sustain serious injuries hitting the water – it’s a long way from the passenger decks down to the waterline. Think broken pelvis, shattered legs, spinal damage, internal organ ruptures, etc. 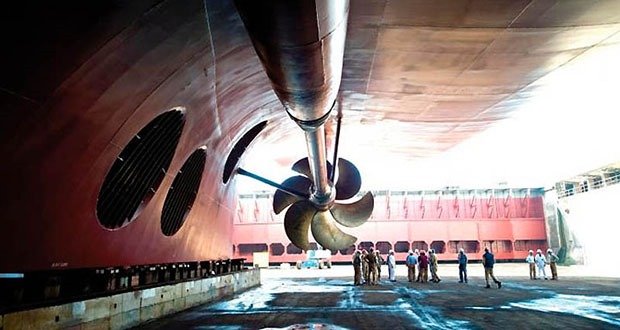 If you survive that, there’s the propellers: the danger that you’re now very, very close to a moving ship that takes a mile or two to stop, and the officers on the bridge almost certainly have no idea you’re there. Swimmers next to large ships have repeatedly been sucked down into the propulsion systems and, well, minced. Do you fancy your chances against something like this? 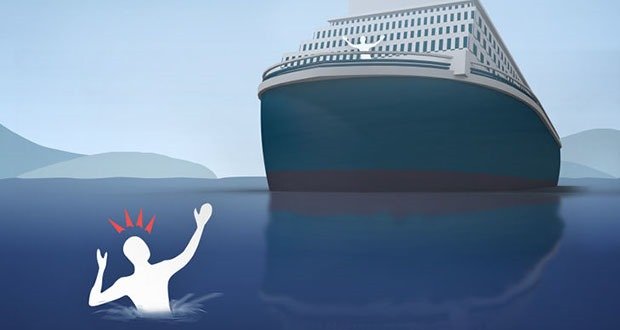 If you survive that, there’s exhaustion: from treading water, as little as 30-45 minutes for a non-athlete. Without constantly making effort to swim, you will naturally float face-down, on your back – not a great way to ensure a supply of air. Admittedly a life ring prevents this. It’s also very, very difficult to swim clothed – try it in a swimming pool sometime. Your clothes become waterlogged and heavy, making every movement sluggish and exhausting. The additional weight pulls you a little lower in the water and they do nothing to keep you from getting cold. Do these passengers know it’s a good idea to kick their shoes off? Probably not. Swimming with them on will be almost impossible.

If you survive that, there’s hypothermia: Even in warm parts of the world, the sea is so cold that you have hours at most before dying as a swimmer. Water is 32 times more efficient at chilling the body than air. If the water is really warm, for instance a cruise in the tropics – the hypothermia risk is replaced by shark risk (see injuries and the possibility that you’re already bleeding, above). 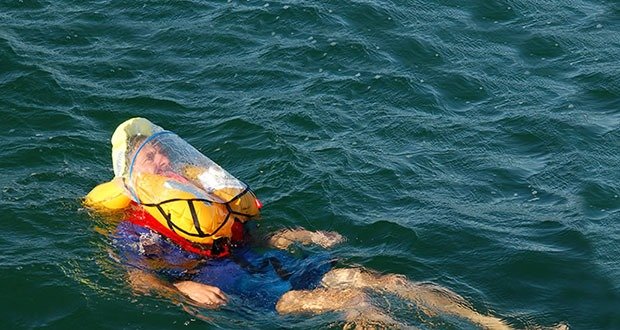 If you somehow avoid that, there’s drowning from water inhalation: in the open sea, even with floatation, it’s amazingly easy to get exhausted trying to stop small waves washing into your face while you are trying to breathe. Ocean lifejackets for sailors, oil-rig workers etc. have sprayhoods for this reason – to deflect incoming water away from your airways. In your scenario, neither passenger has this.

If you survive all of the above, it’s not easy to find someone floating in open water. Not at all. Consider that only their head (maybe an arm?) would be above the waves – and in waves more than, say, eight inches high, they will be bobbing in and out of sight. When teaching yacht sailing, a common demo is for the instructor to toss a fender overboard and say “let’s practice recovering that crew member!” It’s terrifyingly difficult. If you take your eye off the person even to blink, you lose them completely among the clutter of the waves with no visual reference whatsoever. One person is given the sole job of pointing directly at them at all times without moving their gaze, just to try and prevent losing sight of them – that’s their only responsibility until the boat is back alongside the casualty. And this is on a yacht close to the water surface where you can just pull them back in – will you be able to see that tiny head from the height of the ship’s bridge?

Even if you can mark the man-overboard coordinates with GPS, they will then drift downwind/downtide/some unknown combination of the two with every passing hour in ways supercomputers still struggle to model, meaning the search zone gets larger and larger all the time. This is how lifeboats and helicopters end up working ‘search patterns’ dozens of miles across – looking for that head among millions of shifting waves, like trying to spot a screw your friend dropped “somewhere in a grassy field”. Except in this analogy, the grass is shifting and changing constantly, and the screw is drifting at an unknown speed in an uncertain direction. And freezing to death, along with other deadly factors listed above.

Consider that the US Coast Guard has some of the finest helicopters and military-grade cameras, thermal imaging sensors etc, in the world. They still take hours searching for lost persons, and often come back empty-handed. They aren’t incompetent – falling overboard is one of the clearest and most severe dangers present at sea. It really is serious business, and one of my greatest fears.