1. Tom Holland was not allowed to read the script of Avengers: Infinity War since he revealed too many secrets for Spider-Man Homecoming (2017).

2. The Wakandan war cry “Yibambe” is Xhosa for “hold strong.”

3. Security for the filming of Avengers: Infinity War at Durham Cathedral was so tight that not even the Cathedral wardens were allowed access inside.

4. Steve Rogers (Chris Evans) had a new look for Avengers: Infinity War film. At the end of Captain America: Civil War (2016), Steve Rogers quit as Captain America, something which occurred several times in the comic book. For the first time, he assumed the identity of “Nomad.” Rogers’ costume in this film captured basic elements of the Nomad character, in that it is primarily blue and features yellow, disk-like objects attached at the collar. For the second time Steve Rogers quit, he was featured to have grown scraggly with a beard, and he would eventually shave the beard and create a new identity as “The Captain.” Consequently, the physical appearance and costume for Steve Rogers is a combination of the two most popular times he quit being Captain America.

5. Loki says “we have a Hulk” to Thanos. This is exactly what Tony said to Loki in “The Avengers.”

6. The Russo brothers originally confirmed that Captain Marvel would be in Avengers: Infinity War movie. However, Joe Russo later declared that the character would not, and she would instead make her debut in her own movie. The character will have a major role in Avengers 4.

7.  The Russo Brothers paid homage to their well-known show, Arrested Development (2003), in Avengers: Infinity War movie. In Arrested Development (2003), the character Tobias Fünke (David Cross) paints himself blue to resemble the members of the Blue Man Group. In this film, blue Toby Fünke appears as one of the Collector’s items, he can be seen behind and to the left of Gamora in one shot.

9. Robert Downey Jr. had a separate deal from his Marvel Cinematic Universe co-stars when he signed on to reprise his role as Tony Stark/Iron Man in subsequent Avengers films, after The Avengers (2012). However, his appearances in Captain America: Civil War (2016) and Spider-Man: Homecoming (2017) were not tied to this deal. These negotiations occurred separately after he completed his contract to do the Iron Man(2008) trilogy.

10. According to Marvel Studios President Kevin Feige, the Avengers are expected to have a “shakeup” in their team lineup between Avengers: Infinity War (2018) and the untitled Avengers sequel (2019). In other words, the roster is different from the prior two Avengers films.

11. Avengers: Infinity War is the nineteenth film released by Marvel Studios in the Marvel Cinematic Universe.

12. Robert Downey Jr. requested the furniture from his house in Los Angeles be shipped to the filming location of Avengers: Infinity War film in Atlanta, and the movie studios complied.

13. In late July 2016, Marvel Studios announced that this film would simply be known as Avengers: Infinity War (2018), while Part II was referred to as Untitled Avengers (2019) film until the title is chosen.

14. The filming at Durham Cathedral involved moving most, if not all, of the pews to make room for the film sets. After filming on a Saturday night (May 6), the sets had to be moved and the pews replaced in readiness for the Sunday services, then on Monday, everything was changed around again for the completion of the film, Avengers: Infinity War.

15. The 2014 Comic-Con revealed that Josh Brolin would play Thanos in future Marvel films when the actor came on stage wearing the Infinity Gauntlet. 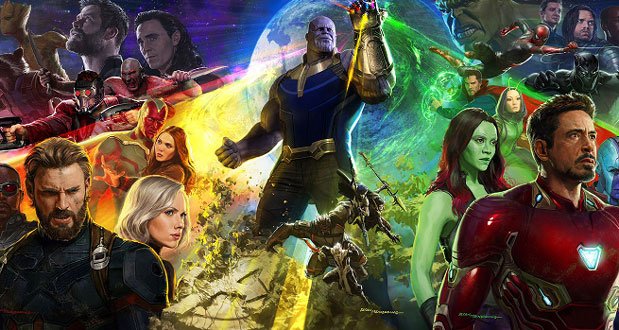 16. In an NY Times interview, when asked about how the script was written to accommodate the large cast, co-writer Stephen McFeely said, “Not every scene can be 25 people in a room. You’re going to have to make kickball teams and then have a tournament.”

17. IMAX stated that Avengers: Infinity War film, along with Untitled Avengers Movie (2019), was entirely filmed with digital 2-D ARRI Alexa IMAX cameras, which are specially customized versions of ARRI Alexa 65 cameras with IMAX technology. Captain America: Civil War (2016) was the first Marvel Cinematic Universe film to incorporate the new cameras, but only for its airport sequence. This made Avengers: Infinity War (2018) the first non-documentary film to be shot entirely with IMAX cameras, although it did not use the traditional IMAX aspect ratio of 1.43:1 but rather the digital IMAX ratio of 1.90:1, which closely matches the 1.85:1 aspect ratio of The Avengers (2012) and Ant-Man (2015).

18. Natasha Romanoff sports a whitish-blonde hair color, making her resemble Yelena Belova, who for a time impersonated Black Widow in the comics.

19. On February 11, 2017, Marvel released the first on-set footage from the first day of filming (January 27, 2017). The footage featured a first look at one of the sets from the movie, with Robert Downey, Jr. (Tony Stark/Iron Man), Tom Holland (Peter Parker/Spider-Man) and Chris Pratt (Peter Quill/Star-Lord) shown on set. Marvel Studios President Kevin Feige confirmed the movies as the culmination of the entire series from its beginning, with the first Iron Man (2008) movie. Feige also confirmed that the Avengers were broken into two sects in Captain America: Civil War (2016), in order to set up Avengers: Infinity War (2018). Feige described Thanos as, “The biggest, best and worst villain that Marvel has ever had,” and stated that Thanos would reveal his reasons for hunting down the Infinity Stones. Concept art was also shown depicting Rocket Raccoon fighting alongside Thor, it was recently revealed how the Guardians will meet the Avengers.

20. In the trailer, Steve Rogers says “together,” Tony Stark replies “we’ll lose,” and Rogers in return says, “we’ll do that together too.” This dialogue was taken from Avengers: Age of Ultron (2015).

21. Avengers: Infinity War film is in chapter seven of phase three in the Marvel Cinematic Universe.

24. On 1 March 2018, as North America was approaching the May 5 release of the film, Marvel Studios announced that Infinity War would release worldwide one week earlier, on 27 April 2018. The move comes from The Walt Disney Company’s decision to let Avengers: Infinity War has more time in the spotlight before Disney and Lucasfilm release Solo: A Star Wars Story on 25 May 2018.

25. Natalie Portman announced she will not star in the film as Dr. Jane Foster, and that she will not be involved in any future Marvel comic book films.