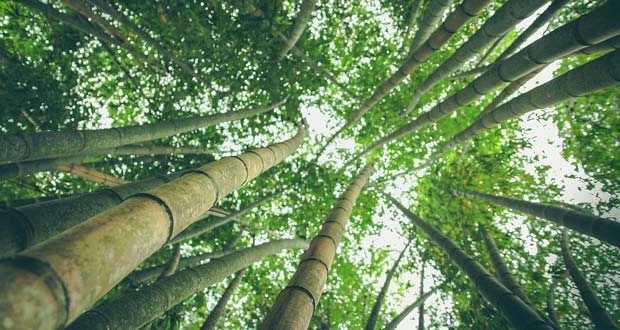 1. Most bamboo species only flower once every several decades, the entire population flowering at once; and, when one variety flowers, the entire variety flowers at the same time the world over, regardless of location, climate, or any other known factors, for reasons scientists have yet to discern. – Source

3. Chinese vampires are depicted in movies as hopping around because in the Qing Dynasty people used to pay ‘corpse carriers’ to return dead migrants to their hometowns. They’d be transported at night lined up on bamboo poles, which would flex as the carriers ran, making the bodies appear to bounce. – Source

4. Two Christian monks smuggled silkworms out of China in bamboo canes. Those silkworms were used to give the Byzantine Empire a trade monopoly in Europe, which became the foundation of their economy for the next 650 years. – Source

5. The giant panda has all the necessary equipment for a meat based diet but it lost a gene that codes for the umami receptor. It has no taste for it and will happily live on bamboo. – Source

6. In parts of Cambodia people have made their own trains out of bamboo after regular services stopped running. – Source

7. The first firecrackers originated when Chinese villagers burned green bamboo, which grows so fast that air pockets get trapped inside of it and explode with a loud bang when heated. – Source

8. During World War II, the British Government covered the Taj Mahal with Bamboo scaffoldings to protect it from German Bombers. This was done again during 1965 and 1971 when India was involved in conflicts with Pakistan. – Source

10. Since the Han Dynasty in 200 BC, the Chinese have drilled for natural gas which was transported in bamboo pipelines to be burned in stoves. – Source

11. According to a Chinese legend, music was invented in 2697 B.C., when the Emperor Huang Ti send Ling Lun to cut bamboo poles that would produce a sound matching the call of a Phoenix bird. – Source

12. A pricing dispute over bamboo poles led to a war that killed 21 million people. – Source

13. Not only can Bamboo be made into a textile, it’s also antimicrobial. – Source

14. Bamboo torture is a practice that the Japanese used on American soldiers in WWII. It involved pinning a man down to the ground over bamboo shoots, which would slowly grow up and through the live soldier over several days. – Source

15. Certain establishments in Japan serve Flowing Noodles. These are cold noodles that are sent down an open bamboo shoot running the length of the table. Customers must catch as much as they can to eat. – Source

16. Emperor Wenxuan of Northern Qi made condemned prisoners strap on bamboo mats as wings, and forced them to jump from a tower. They were all killed, and “the emperor contemplated the spectacle with enjoyment and much laughter.” – Source

17. Ernest Hemingway’s brother declared a bamboo raft the independent nation of New Atlantis; it was lost during a storm in 1966 when it was ripped away from the Ford engine block it used for an anchor. – Source

18. A Vietnam War helicopter pilot created an impromptu LZ by using the helicopter rotor blades to cut down thick bamboo. He saved 100 South Vietnamese troops from an ambush. – Source

19. Several messianic religions sprang up during WW II in tribal societies to explain the airdropped supplies that would find their way onto their islands. The “cargo cults” built mock airstrips and radios out of bamboo and coconut in religious services to convince the gods to send more supplies. – Source

20. All Tesla Model S cars are quality checked on an elevated bamboo flooring. The material was chosen “because it looks cool”. – Source