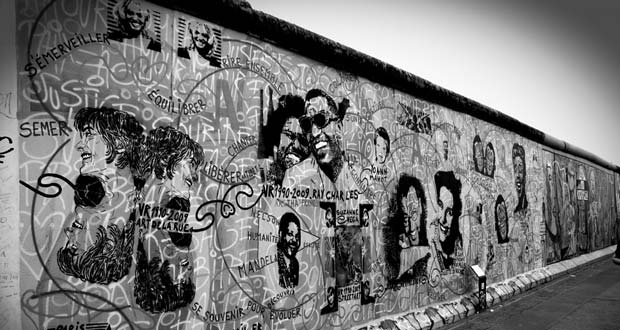 1. The Berlin Wall was a wall that encircled all of West Berlin; it didn’t just bisect Berlin. Also, West Berlin was surrounded by East Germany for over 100 miles in all directions. – Source

2. David Bowie performed at the Berlin Wall, while East Germans gathered to listen behind. “And we would hear them cheering and singing along from the other side. God, even now I get choked up. It was breaking my heart. I’d never done anything like that in my life, and I guess I never will again.” – Source

3. Peter Fechter was an 18-year-old East German, he was shot by East German troops trying to cross the Berlin Wall, was caught in barbed wire, and bled to death in front of the world’s media, as police tried to throw him bandages. – Source

4. In 1963, an East German soldier named Wolfgang Engels stole a tank and drove it through the Berlin Wall at top speed to try and escape. – Source

5. The Berlin Wall was torn down by mistakenly-empowered citizens after an East German spokesman misspoke at a press conference and mentioned immediate border crossing privileges for every citizen. – Source

6. East Germany created its own cola drink. Vita-Cola’s sales almost disappeared after the fall of the Berlin Wall brought Coke and Pepsi into the East. It is still the most popular cola in Thuringia, making the German state one of the few places in the world where Coca-Cola is not the leader. – Source

7. The Newseum in Washington D.C. has the largest portion of the Berlin Wall outside of Germany. – Source

8. In September 1989, British Prime Minister Margaret Thatcher pleaded with Soviet President Mikhail Gorbachev not to let the Berlin Wall fall and confided that she wanted the Soviet leader to do what he could to stop it. – Source

9. Anatoliy Golitsyn was a KGB agent who defected to the US in 1961. He claimed the Soviets planned a long term deception strategy to lull the West into a false sense of security by appearing to break apart predicting the fall of the Berlin Wall, the formation of the EU and financial problems in the US. – Source

10. For the 25th anniversary of the fall of the Berlin Wall, 8000 glowing balloons were installed along 10 miles of the site of the former East/West barrier – the public was encouraged to attach messages to these, which were then released in unison at the end of the celebration. – Source

11. November 9 is the anniversary of the fall of the Berlin Wall. – Source

12. Two families escaped over the Berlin Wall by building a hot air balloon. A mechanic and a Mason used their mechanical know-how to build a hot air balloon engine out of old propane cylinders. Their wives pieced together a makeshift balloon from scraps of canvas and old bed sheets. – Source

13. One of the most accomplished American female recurve archers, Erika Eiffel, is married to the Eiffel Tower, dated her bow, and had a decades-long relationship with the Berlin Wall. She is currently dating a crane. – Source

15. There is a registered satirical party in Germany named “The Party”(politically). Their youth organization is the “Hintner Jugend”. Their goals are to rebuild the Berlin Wall, a CEO quota for lazy people and making the tax system even more complicated (among others). – Source

16.  The Soviet Union added tens of thousands trip wired machine guns inside the inner section of the Berlin Wall to prevent people in the East from escaping. In 1983, the Soviets agreed to dismantle the controversial machine guns in exchange for a 2 billion Deutsche mark loan from West Germany. – Source

17. The statue of Ronald Reagan in the US Capitol building has bits of the Berlin Wall in it. – Source

18. The 3 Bethke brothers escaped East Berlin one by one. The first, Ingo, used an air mattress to float to the West. The second, Holger, used a zip line to go over the Berlin Wall to freedom. Then, to rescue their third brother, Egbert, they flew ultralight planes and retrieved him. – Source

19. Roswell, New Mexico was gifted a piece of the Berlin Wall for its treatment of WW2 German Prisoners of War. – Source

20. Holger Bethke shot an arrow from an attic over the Berlin Wall. Then he used a pulley to ride across to West Germany. Surprisingly no guards saw him. He later reunited with his brother there. – Source

21. A college dropout, Thierry Noir in 1984 using graffiti, pioneered the trend of painting the Berlin Wall as a form of protest. Climbing through small holes and avoiding gunfire, Noir was able to paint 5 km of both the West and the East sides of the Wall. Noir is now a well-known artist. – Source

August 25, 2017
Latest Posts
Subscribe to Blog via Email
Did you know?
Loading...
Facts of the Day
Registration is disabled.