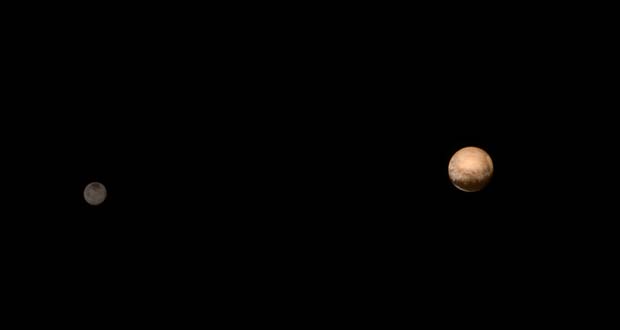 1. The guy who discovered Pluto’s moon Charon made up the name to resemble his wife’s name, Charlene. He later discovered that in Greek mythology, Charon was the ferryman who brought the souls of the dead across the river Styx to Hades, AKA Pluto. – Source

2. The New Horizons spacecraft is carrying a U.S. Quarter, in a nod to Greek Mythology, to pay the ferryman Charon. – Source

3. The Dwarf Planet Pluto has a 5 moons celestial system comparable to our own earth and moon, except Charon (Pluto’s first moon) is so big it forces the center of gravity away from the planets, thus causing them to spin around a random point in space. – Source

5. Charon, Pluto’s largest moon, will have its features named after fictional space explorers, vessels and locations. Star Trek references have already been approved for Craters. – Source

6. The dark region on the north pole of Pluto’s moon, Charon, is called Mordor. – Source

7. In 2006, the IAU General Assembly considered a proposal that Pluto and Charon be reclassified as a double planet. – Source

8. Charon appears to be covered in frozen water, differing from Pluto’s surface, which is composed of frozen nitrogen, methane, and carbon dioxide. – Source

9. It would take about 6,293 years to drive to Pluto’s largest moon, Charon, from Earth going a steady 65 mph. It would take a Boeing 777 going 590 mph about 680 years to go from Earth to Pluto. It took the New Horizons probe going 50,000 mph, the fastest speed ever for a launched spacecraft, a little under a decade to get to Charon. – Source

September 8, 2017
Latest Posts
Subscribe to Blog via Email
Did you know?
Loading...
Facts of the Day
Registration is disabled.